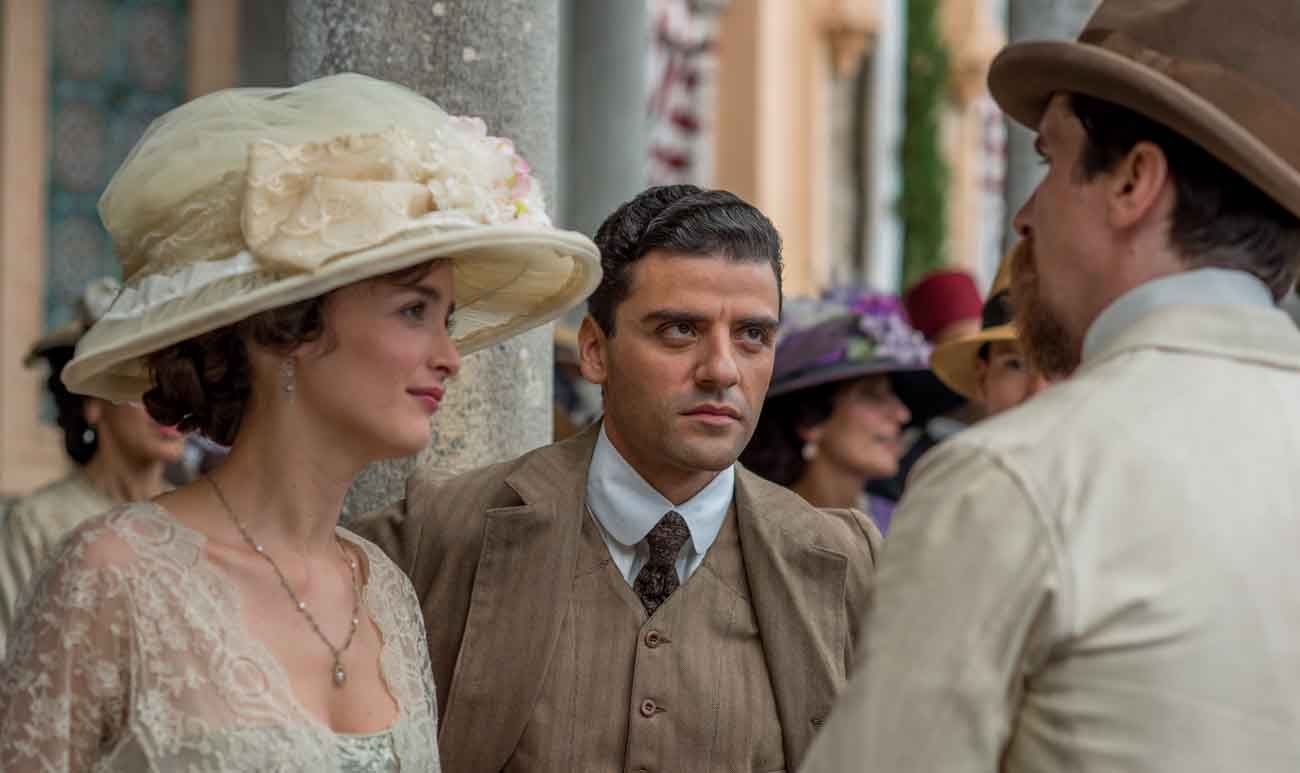 Charlotte Le Bon, Oscar Isaac and Christian Bale star in a scene from the movie "The Promise." The film dramatizes the genocide of Armenians in the Turkish-ruled Ottoman Empire at the outset of World War I. (CNS photo/Open Road Films)

WASHINGTON (CNS) — “The Promise,” a film dramatizing the genocide of Armenians in the Turkish-ruled Ottoman Empire at the outset of World War I, was two years in the making, but probably a half-century in the idea stage, according to George Winter, one of the movie’s producers.

Kirk Kerkorian, the Armenian-American who owned the MGM studio 1969-86, had wanted to make a film about the genocide, but could not. “It was a controversial topic, even when he owned the company,” Winter told Catholic News Service in a telephone interview from Los Angeles April 13 — the day after a preview screening at Grauman’s Chinese Theatre in L.A. attended by Armenian-American celebrities Cher and the Kardashian sisters.

Before Kerkorian died in 2015, “he set aside the money and wrote the check” to get the movie made “at the quality level he wanted it,” Winter said.

“The Promise” stars Oscar Isaac as an Armenian medical student in Constantinople (now Istanbul) and Christian Bale as a globetrotting Associated Press correspondent detailing the growing horror of the genocide — when he’s not drinking. They also happen to be romantic rivals for Ana (Charlotte Le Bon), a governess in the home of the Isaac character’s uncle, with whom he is staying while attending medical school.

Bale, who earned an Oscar nomination for his performance in “The Big Short,” and Isaac, more popular than ever after his star turn in “Star Wars: The Force Awakens,” “don’t have to do these kinds of movies. Christian Bale doesn’t need money, but (‘Promise’ director and co-writer Terry George) really approached him at a personal level,” Winter said. “Both of these actors did their own research to understand what the characters, what the story was about. They become the face of the story when the movie comes out.”

It was not long after filming began in Spain in 2015 when Pope Francis quoted St. John Paul II in describing the deaths of an estimated 1.5 million Armenians at the hands of Ottoman Turks as the 20th century’s first genocide. When Pope Francis visited Armenia last year, he used the word “genocide” repeatedly, and Winter recalled that Eric Esrailian, another producer, burst onto the set with the news.

The events of a century ago can easily be seen as remarkably contemporary, what with immigrant backlash, violence directed against ethnic groups other than one’s own, reports of slaughters, and parts of the world turning a blind eye to it all. There’s even one scene in which one character expresses belief that fleeing Armenians will be safe in Aleppo, Syria — the site a year ago of one of the most harrowing sieges of the protracted, multisided Syrian civil war.

However, resonance with current events is no guarantee of box-office success. Winter remembers producing a movie that depicted Air Force bombing raids that was released a week before the 1991 Persian Gulf War — when viewers could see the real thing on CNN.

He said he realizes that “The Promise” won’t be a success if only Armenians see the movie. Part of the promotional campaign includes an extensive use of social media and talking to faith leaders of all stripes, said Winter, a lifelong Presbyterian, who is now a member of the Church of the Nazarene and teaches a Sunday school class for adults on the Best Picture Oscar nominees. “We’re also pushing the love story,” he added.

Audience reaction to “The Promise” at preview screenings is muted, he said, but in a different way.

“Well, it’s a quiet, it’s a stunned response. You watch the movie, you can feel the oxygen leave the room. There is an audible, emotional gasp in the room. It was true in Toronto, it was true at the Chinese theater in Los Angeles,” Winter told CNS. “It’s quite a response when you get savvy moviegoers who are shocked.”

“I think what that points to you need to make movies that will stand the test of time and are worthwhile and will last. That’s what’s important. That’s why this story is being told. It was relevant years ago, it’s relevant today.”

NEXT: U.S. Catholics urged to use Passion as motivation to ‘change the world’