U.S. Catholics urged to use Passion as motivation to ‘change the world’ 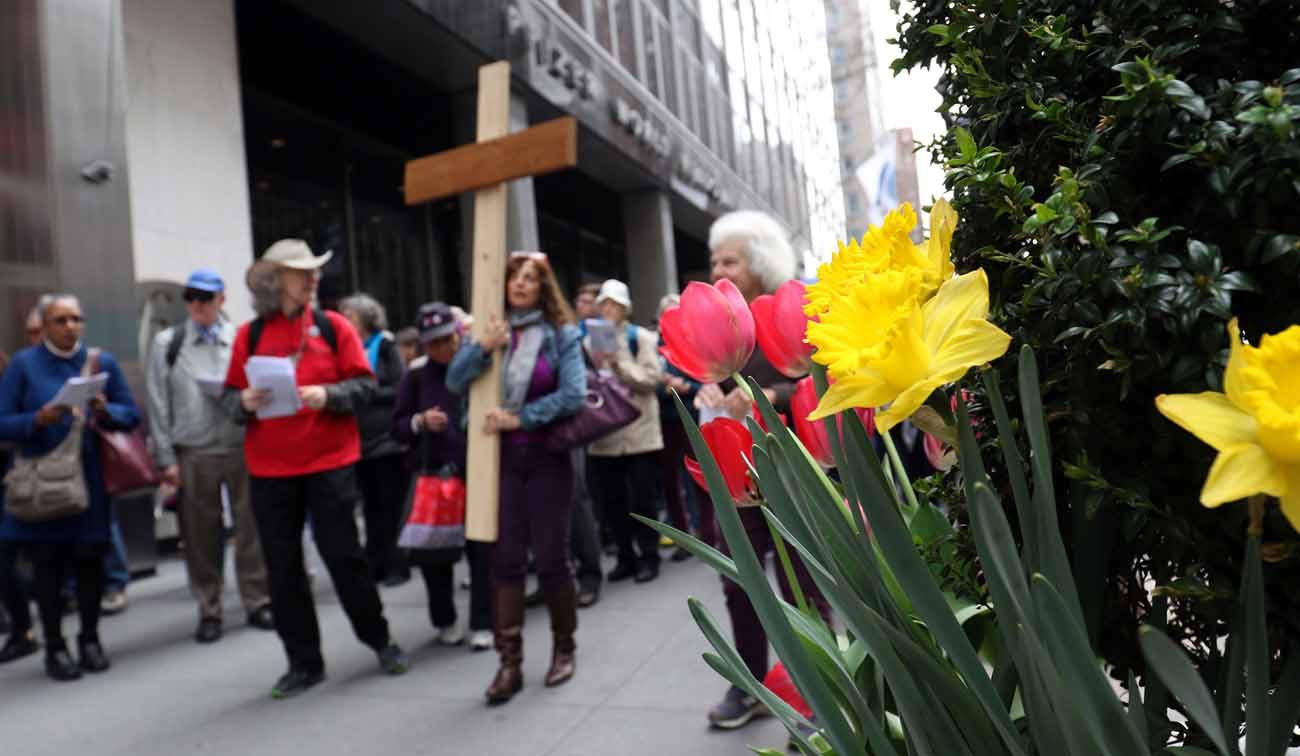 Participants process through the streets of midtown Manhattan during the 35th annual Pax Christi Metro New York Way of the Cross/Way of Peace April 14 in New York City. "Jesus Calls Us to Active Nonviolence" was the theme of this year's Good Friday commemoration. (CNS photo/Gregory A. Shemitz)

WASHINGTON (CNS) — As U.S. Catholics prepared for Easter, the hierarchy of the church used the symbol of the crucifixion and resurrection of Christ as a path to bring peace to society’s troubled spots.

In cities across the country, the Good Friday Way of the Cross has become a modern-day portrayal of the 14 Stations of the Cross in the passion of Jesus and a way of drawing attention to social justice issues of the day.

Cardinal Blase J. Cupich of Chicago led a Good Friday “Walk for Peace” April 14 through the Englewood neighborhood of his city that has been a hot spot for violent crime.

The walk was organized by the archdiocese, its parishes and a host of other Catholic groups and Chicago organizations.

In addition to pausing as participants traced the Stations of the Cross, there were testimonies from people who have lost loved ones to violence in Chicago during the past year.

During his Palm Sunday homily at Chicago’s Holy Name Cathedral, Cardinal Cupich said this neighborhood was chosen for the Good Friday walk to let the local citizens overwhelmed by violence know they have not been forgotten.

“We do so at a time when all efforts to quell the violence seem useless, the problems so complex and the challenges so enormous; when people have lost hope because all they see around them is in total collapse,” he said. “But, we also do so in a week called holy, when grace surges in us again as we look at the crucifix and are reminded that no act of love is ever wasted.”

Monuments and art exhibits in Washington were used as the backdrop for an April 7 Stations of the Cross walk, giving participants points of reference to relate more contemporary sufferings and renewal from hardship to Jesus’ passion.

“These 14 moments in which Christians recall the emotion, the feeling, the thoughts in those final hours of Jesus’ life actually evoke issues that are pertinent to so many issues of social justice today,” said the Rev. Catriona Laing, interim associate rector at the Church of the Epiphany, an Episcopal church in Washington, and co-curator of the walk in the nation’s capital.

“The Stations of the Cross has become more and more of a way for Christians to voice their solidarity, their compassion, their empathy, to those who suffer in different ways, who find themselves on the margins of society today,” she said.

The foot washing also was in solidarity with Pope Francis, who washed the feet of 12 inmates at a maximum security prison outside of Rome on Holy Thursday, a sign of service to people on the margins of society.

In its 35th annual Good Friday Way of the Cross in New York, the Catholic peace organization Pax Christi Metro New York called on its participants to reflect on the many ways Jesus called the world to active nonviolence.

The politically charged issue of immigration was to be the focus of an evening Good Friday event a few miles away from Manhattan.

Bishop Nicholas A. DiMarzio of Brooklyn, New York, was scheduled to lead thousands of Italian-Americans through the streets of Brooklyn’s Bensonhurst neighborhood praying the Way of the Cross during the evening hours of Good Friday, to honor the influx of immigrants from southern Italy who populated the area and brought the tradition from their homeland.

Holy Week is meant to remind Catholics what it means to be a Christian in today’s world and how they can bring hope and possibility to an uncertain society, Los Angeles Archbishop Jose H. Gomez said in an April 13 column for Angelus, the magazine and online news site of the Archdiocese of Los Angeles.

“When we know Jesus, we feel his desire to change the world,” Archbishop Gomez said, “to give homes to the homeless and food to the hungry, to visit the prisoner and welcome the stranger; we want to defend the most vulnerable — the child in the womb, the elderly and disabled.”