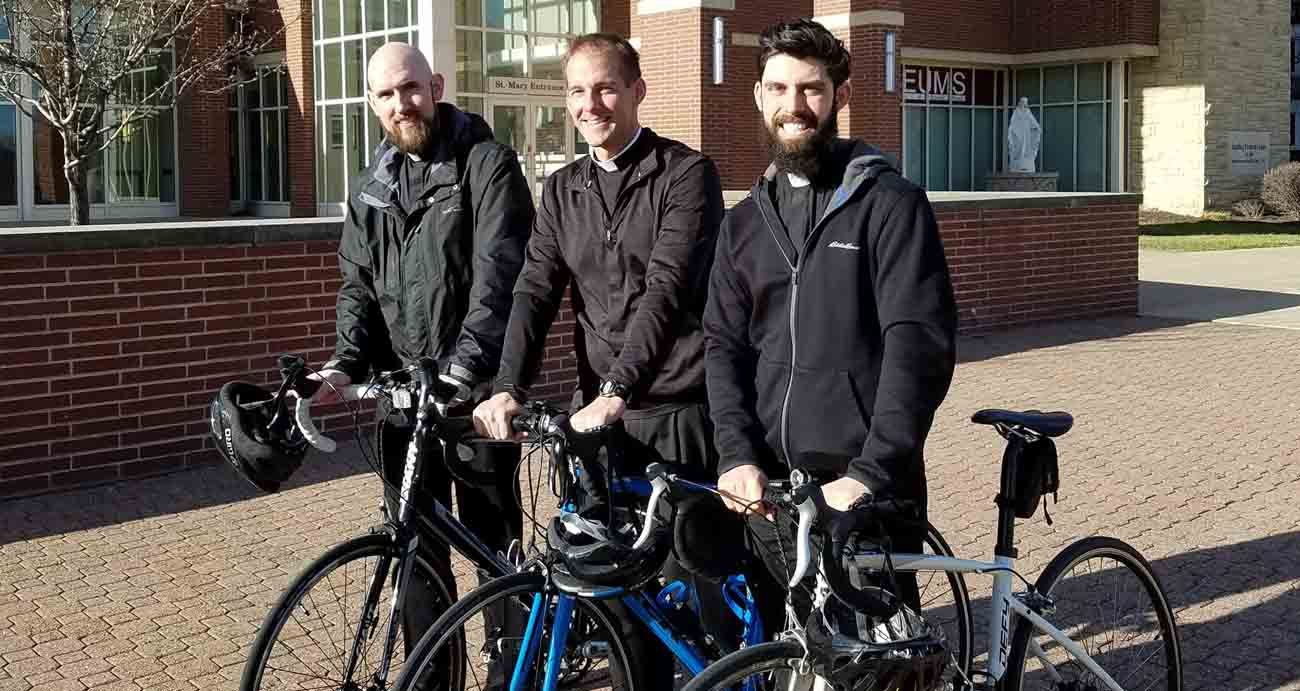 Three priests from the Diocese of Peoria, Ill., plan to ride their bicycles across the diocese, a trek of 350 miles, from April 24-28 to inspire prayers for vocations. The "Priests Pedaling for Prayers" are Fathers Tom Otto, Adam Cesarek, and Michael Pica. (CNS photo/courtesy Diocese of Peoria's Office of Priestly Vocations)

PEORIA, Ill. (CNS) — Being a priest has made Father Michael Pica, Father Adam Cesarek and Father Tom Otto so happy that they are preparing to share their joy with people from Rock Island to Danville — literally.

From April 24 to 28, the three priests will ride their bikes 350 miles across the Diocese of Peoria — the width of Illinois — to raise awareness for vocations and show people that priesthood is a wonderful life. Along the way, they plan to stop at schools and parishes to encourage prayers for vocations and tell the story of their own call to priestly service.

A passage from Matthew’s Gospel provides the theme for the journey and will grace the cycling jerseys they wear and the T-shirts they hand out: “Ask the master of the harvest to send out laborers for his harvest!”

“We love being priests. This is the absolute best thing that has happened to us in our lives and cycling is just sort of the vehicle that’s going to get us to these schools and these parishes to share that with people,” said Father Otto, who was ordained in 2013 and serves as parochial vicar at Immaculate Conception in Monmouth and St. Patrick in Raritan.

The idea came from Father Pica, who was ordained last May and assigned to St. Patrick Church of Merna in Bloomington and St. Mary in Downs. The three priests like to ride and as they were cycling during an event for young clergy last summer, he asked Father Otto and Father Cesarek if they would be willing to use their hobby to benefit vocations.

“There are people who bike across Iowa — what if we bike across the diocese?” he proposed, referencing the Annual Great Bicycle Ride Across Iowa, also known as RAGBRAI, sponsored by The Des Moines Register daily newspaper.

As they developed the idea, the three priests realized more money wasn’t the answer to promoting vocations. Instead of a fundraiser, they decided to make it a prayer-raiser.

He said they would be sending out prayer cards and asking the students and parishioners at each stop to consider what prayer or sacrifice they could offer to make vocations more plentiful.

“Prayer is powerful and prayer is effective and when we trust in that, when we pray with faith, God answers our prayers,” Father Otto said. “The more people we have praying and sacrificing, asking God to send us more priests, that’s going to directly help the young men who are being called to be priests to discover that and to say ‘yes’ to God’s call in their life.”

Father Cesarek said another important aspect of the ride is showing young people that “priests do exciting, cool things, too.”

“Yes, the most important things priests do are celebrating Mass and the sacraments and taking care of their people,” he said, “but this will let people see, especially young people, that priests do fun, normal stuff. As a kid, I never would have known that was the case.”

If he had witnessed something like this when he was 8 years old, he might have pursued his priestly vocation much earlier in life, said Father Cesarek, who was ordained in 2015 and is parochial vicar for St. Mary in Pontiac, St. Paul in Odell, St. Joseph in Flanagan, and St. John in Cullom.

Starting April 24, they will travel from East Moline to Monmouth, which is about 70 miles, and then from Galesburg to Peoria, about 60 miles, April 25.

The following day will be a distance day, with the intrepid cyclists expecting to travel at least 90 miles.

They will cover about 40 miles each of the next two days, going from Bloomington to Champaign and then finishing in Danville April 28.

Some priests, deacons and parishioners who are cycling enthusiasts have indicated that they would like to be part of the journey, if only for a few miles. Fathers Pica, Cesarek and Otto said they would make the ride “rain or shine.” The only thing that would take them off the road is lightning.

“It’s going to involve some suffering. We’ll have problems along the way, but that’s sort of the journey of life,” Father Cesarek said. “Hopefully the Lord uses this in powerful ways.”

Father Timothy Hepner, diocesan vocations director for recruitment, is confident that will be the case.

“These three priests are inspiring to me and to all of the faithful around the diocese,” said Father Hepner, “and it’s great to see other people getting on board to offer their sacrifices and prayers in union with them.”

PREVIOUS: Make persecution ‘difficult for others to ignore,’ cardinal says