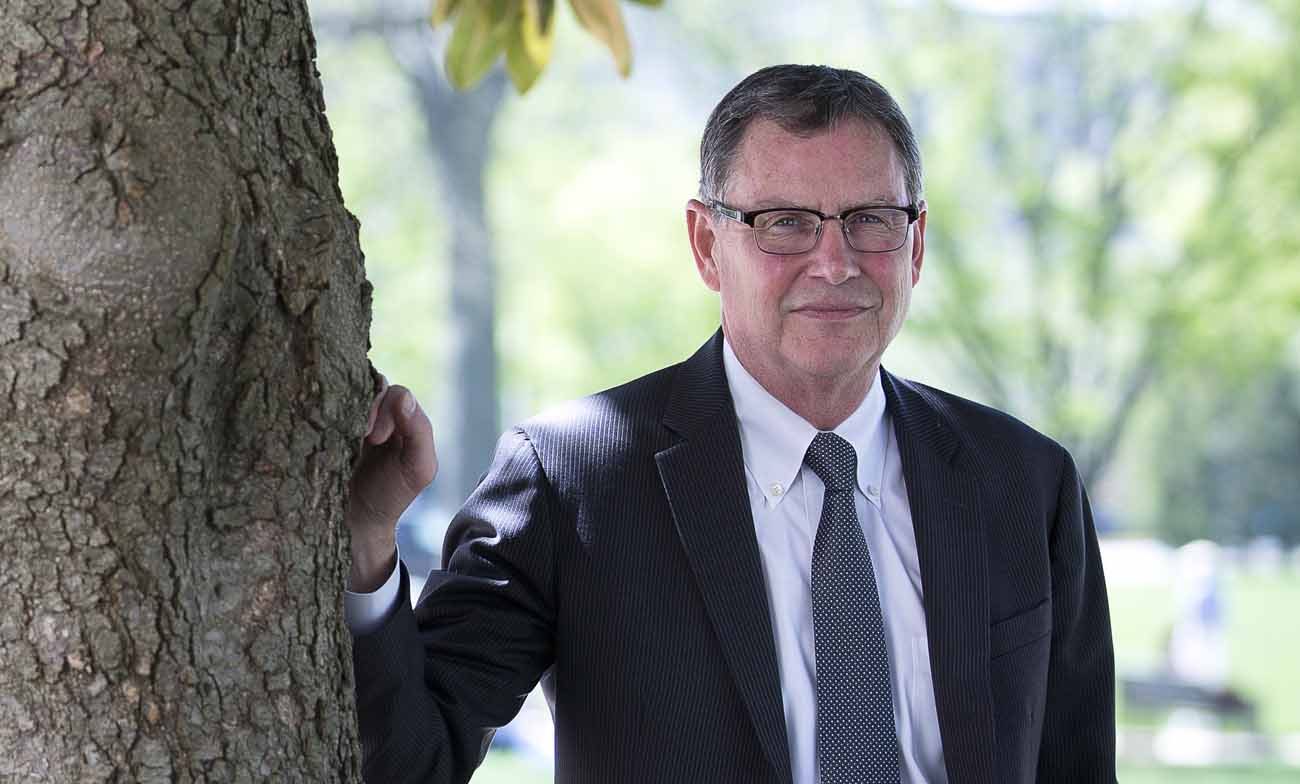 Stephen Schneck, director of the Institute for Policy Research and Catholic Studies, poses for a photo on the campus of The Catholic University of America in Washington April 11. Schneck was set to retire April 28. (CNS photo/Tyler Orsburn)

WASHINGTON (CNS) — For all his love of politics and the “frothy media excitement” that surrounds it, Stephen F. Schneck is hardly a political animal.

He’s more the thoughtful type, bringing a calm demeanor and insights formed by his Catholic faith to the high-volume and often contentious debates on important public policy issues since becoming director of the Institute for Policy Research and Catholic Studies at The Catholic University of America in 2005.

While he won’t have quite the stage the institute offered in exploring various aspects of the ever-changing political scene through symposia, lectures and guest columns, he is expecting to draw from a network of contacts nationwide to seek new opportunities to accentuate that politics must be a moral endeavor working for the common good.

Schneck admitted that such a basic standard in the country’s current polarized political environment may be difficult to achieve right now. But he’s not giving up and he will continue to share what he considers to be the key guiding principle for politics in any form. It’s a principle that he also hopes will reach the hearts and minds of those who have chosen politics as a career.

“At some point I came to realize that politics is the doing of civilization. It really is,” he told Catholic News Service in mid-April. “It’s not really about who’s ahead in the polls or who wins or loses. Politics in the broadest sense is about building civilization.”

It’s a concept that students, public officials, bishops and the broader public have heard from Schneck since he joined the university faculty in 1984 after completing work on a doctorate degree from the University of Notre Dame. Schneck, who describes himself as a political philosopher, said he also has worked to build the institute around that essential understanding with a healthy dose of Catholic social teaching mixed in.

“I see what we’re trying to do here (through politics) isn’t just about who gets what when and how,” he explained. “It’s not just about divvying up resources, but it’s really about building civilization. Politics, when it’s working, achieves that. When it does happen, it’s really magical.”

Schneck originally became director of the institute’s forerunner, the Life Cycle Institute, 12 years ago. The institute’s name changed in 2009 to more accurately reflect its mission as Schneck began transforming the program into the highly regarded think tank that it is today. Schneck also expanded the institute’s list of fellows to include experts from a wider array of disciplines and from other organizations and schools.

As the reputation of the institute grew, Schneck gained wider notice in the political realm as well. He was invited to meet with President Barack Obama and Vice President Joe Biden at times. Several institute fellows have testified on key issues on Capitol Hill.

Of course, CUA’s institute was not the only program to bring Catholic social teaching to public policy discussions. But coming from the U.S. Catholic Church’s official national university, the messages shared through the institute’s programs seemed to carry a bit more weight, sending a message to Capitol Hill and the White House that Catholic social thought was relevant to the key issues facing the country.

Schneck said such emphasis on church teaching had been the goal of CUA’s president at the time, now Bishop David M. O’Connell of Trenton, New Jersey. The bishop credited Schneck for wanting to “grapple with some of the substantive issues that were being faced by the church within the broader marketplace.”

“Steve articulated that purpose very well, to engage society and the political world and the movers and shakers in contemporary political life,” Bishop O’Connell told CNS. “Steve has a very good insight for that. He brought it forward at the right time.”

Schneck’s work in the classroom has been recognized as well. He has received several teacher of the year awards from the university.

“He’s been such a great university citizen,” Garvey said, citing a period in 2012 and 2013 when Schneck agreed to serve as acting dean of the National Catholic School of Social Service despite numerous other responsibilties. “He was someone who had immediate credibility with the faculty and did such a fabulous job.”

Schneck leaves his position with a couple of unattained goals. He said he would have liked the institute to develop its own capacity to conduct polling to measure public perception on key issues affecting the country. He also thinks history is important to understanding modern-day politics and having more historians in the ranks of institute fellows who could connect the dots from years past to today’s realities to create better understanding of the political process, he said.

For now, though, Schneck is ready to move on to the next phase of his career.

“I can’t imagine that I’m ready to abandon my effort to bring Catholic insights into American public life,” he said. “I have some offers to write columns for some Catholic magazines. I have a book that remains unfinished … that I’ll be turning back to.”

Schneck has been traveling around the country as he prepares for retirement, visiting friends at universities and meeting bishops with whom he has worked on institute programs to gain a better sense of how important the Catholic voice can be in influencing public policy choices. He thinks he may work to help bridge the polarizing gaps that exist across political party lines and within the church as well.

“If we can’t figure out a way to achieve solidarity or find a way of healing this rift, then I worry profoundly about both American political life and our church,” Schneck said. “This I think is the biggest task, the biggest challenge facing us. There are lots of challenges, but none of those challenges can be addressed until we address this and find a way to work together with one another.”

NEXT: Steelers chairman Rooney recalled for quiet strength based on his faith