Steelers chairman Rooney recalled for quiet strength based on his faith 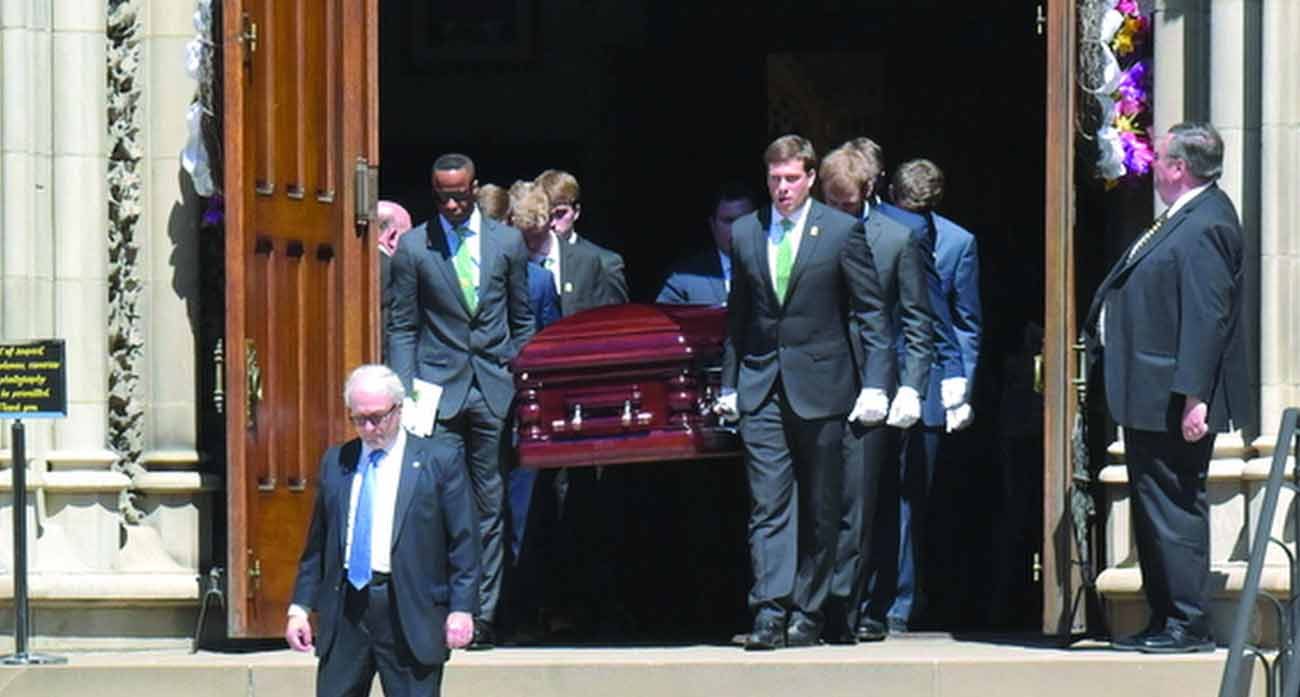 PITTSBURGH (CNS) — One reason there is such affection for Dan Rooney, said Cardinal Donald W. Wuerl of Washington, is that he was clearly a man of the people, a person of western Pennsylvania and a quintessential Pittsburgher.

“Whether he was Ambassador Daniel Rooney, Hall of Fame Pittsburgh Steelers president or just Dan, he reflected so well the qualities of this part of the world,” the cardinal said. “He worked hard, he was a loyal friend, a good neighbor, he took seriously his duties to his family, his obligations to the community, his commitment to the Steelers, his love of the game, the need to be straightforward, honest and caring. He was a Pittsburgher. He was the best of us.”

Cardinal Wuerl reflected on the beloved chairman of the Steelers in celebrating his funeral Mass April 17 at St. Paul Cathedral in Pittsburgh.

Bishop Zubik spoke of a man who was a friend to the rich and not-so-rich, a man who had great vision as a businessman.

Cardinal Wuerl had known Rooney for some 50 years from his time as a priest and bishop in the Diocese of Pittsburgh. In his homily, he spoke of “the wonderful story of a man with a huge and caring heart.”

It began, he noted, with the great love Rooney had for his wife, Patricia. The cardinal spoke of a man who held his family close to himself, and personified the Rooney family as the Steelers family.

He recalled visiting Heinz Field with Rooney a few weeks before construction was completed in 2001. While the workers were friendly in greeting the then-bishop of Pittsburgh, Cardinal Wuerl noted, their real desire was to get a picture with the Steelers chairman.

But as much as Rooney was involved in Pittsburgh history and the story of the Steelers, the cardinal spoke of how proud Rooney was of his Irish heritage. He pointed to Rooney’s efforts with the Ireland Fund that engaged both Protestant and Catholic youths in Ireland in educational efforts and community building programs.

Rooney’s appointment as U.S. ambassador to Ireland was not only something he cherished but carried out in a highly effective manner, Cardinal Wuerl said. Rooney visited every county in Ireland in his role, the cardinal said, and it wasn’t an exaggeration to say that he was beloved as much in Ireland as he was in Pittsburgh.

But through it all, Cardinal Wuerl said that Rooney never lost “his common-man touch or the sense of his roots.” He noted that when the two would speak by phone, the cardinal would answer, “Hello, Mr. Ambassador,” but Rooney always replied, “It’s Dan.”

“Dan, while he traveled all over the world, never really left the North Side,” Cardinal Wuerl said.

He spoke of Rooney’s commitment to St. Peter Parish as an expression of his love for his faith. While he never wore his faith on his sleeve, Cardinal Wuerl noted, he certainly carried it in his heart.

And while much has been made of Rooney’s sense of fair play and his respect for others and their dignity, he continued, the late Steelers chairman would be the first to pay tribute to his faith and the religious principles that grounded his life. The cardinal pointed to the “Rooney Rule,” which stipulates that NFL teams must interview at least one minority candidate for top coaching positions.

“He grew up learning on the streets of the North Side and the halls of North Catholic High School that you judge people by who they are, not the color of their skin or their national origin,” he said.

Rooney’s death, Cardinal Wuerl said, brings us “face to face” with the faith that guided his life.

Rooney is survived by Patricia, his wife of 65 years; four brothers; seven children; 20 grandchildren; and five great-grandchildren. His daughter Kathleen died in 1987, and his daughter Rita died in 2012.

NEXT: Special collection translates into missionary work for U.S. regions