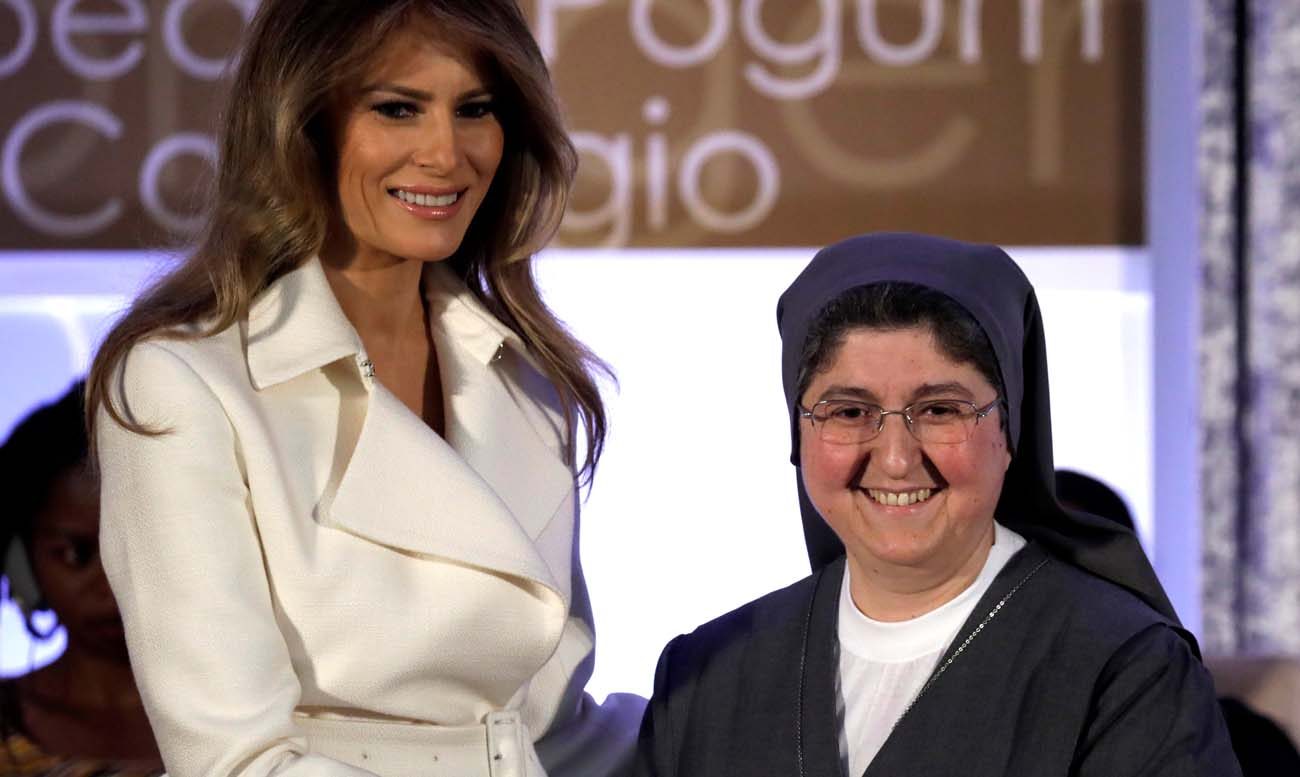 First lady Melania Trump presents Sister Carolin Tahhan Fachakh of Syria with the 2017 Secretary of State's International Women of Courage Award during an award ceremony at the State Department in Washington in this March 29, 2017. Sister Tahhan Fachakh is a member of the Daughters of Mary Help of Christians. (CNS photo/Kevin Lamarque, Reuters)

WASHINGTON (CNS) — A religious sister from Syria was one of 13 women honored March 29 by the U.S. Department of State with the Secretary of State’s International Women of Courage Award.

First lady Melania Trump presented the awards, which recognize women around the globe “who have shown exceptional courage and leadership in advocating for women’s rights, empowerment and justice, often at great personal risk,” said a news release.

Sister Carolin Tahhan Fachakh, a member of the Daughters of Mary Help of Christians, who lives in Aleppo, Syria, was recognized for working “tirelessly to support the needs of Syria’s most vulnerable populations, particularly internally displaced persons and children.”

“During a period of intense bombing around a neighborhood school, Sister Carolin selflessly ensured that the children were brought safely home to their parents,” the State Department said. “She has been a beacon of hope to both Muslims and Christians alike, while putting her own life at risk.”

Among the other honorees were:

— Natalia Ponce de Leon, a Colombian survivor of a chemical acid attack that burned her face and body who has undergone about 50 surgeries to get her life back.

— Fadia Najib Thabet, a child protection officer and reporter on human rights violations in southern Yemen, risked her life to protect the region’s children from al-Qaida and other terrorist militias.

— Veronica Simogun, founder of the Family for Change Association and advocate for women and girls in Papua New Guinea, has lived and worked in a country where two-thirds of women and girls have been victimized because of their gender.

“Ask yourself if you would have the fortitude of spirit, the courage of your convictions and the enormous inner strength required to stand up and fight against such overwhelming odds,” Trump told the audience. “Amazingly, each of our honorees has courageously answered ‘Yes’ to those questions.”

She called the honorees “true heroes” for being on the front lines to fight injustice. Trump said their brave actions are a reminder that “there is always hope whenever the human spirit is brought to bear in the service of others.”

PREVIOUS: Bill passes to allow states to redirect funds away from abortion clinics

NEXT: As evangelization tool, Alpha course lays foundation for discipleship