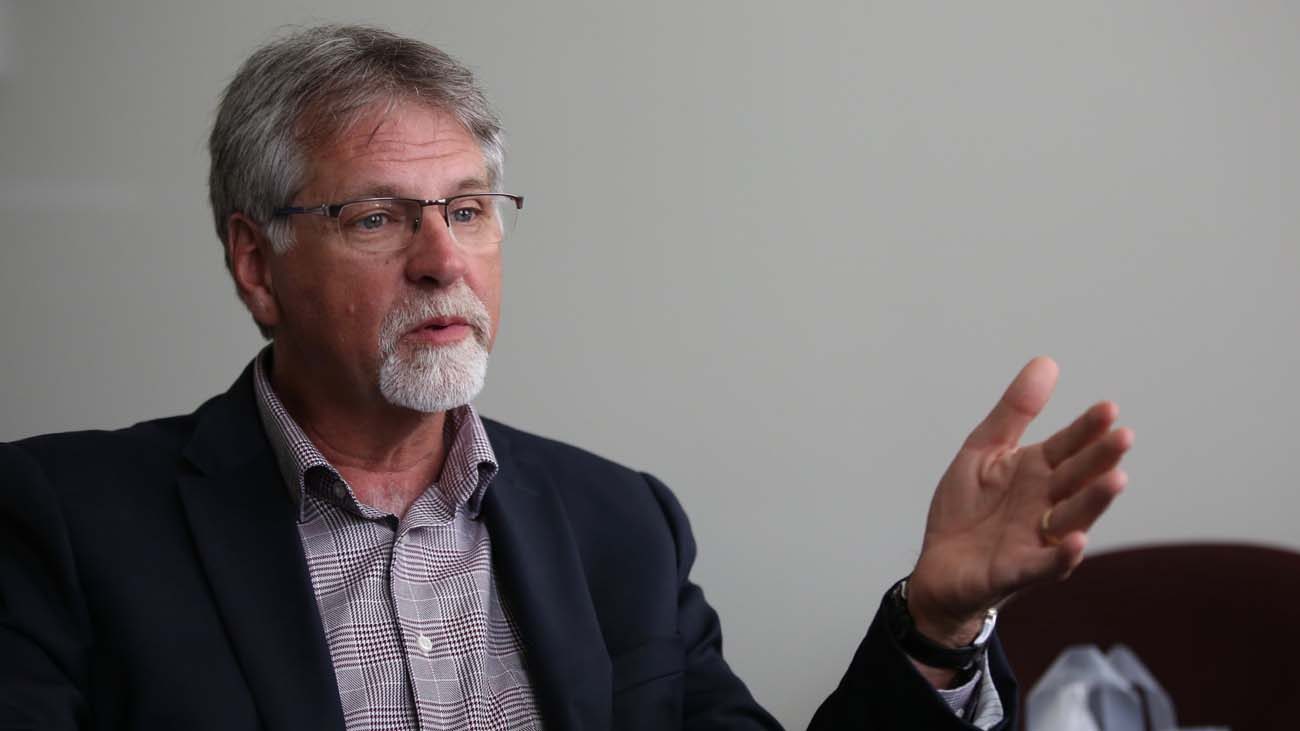 Deacon Steve Mitchell, who ministers in the Archdiocese of Detroit, is pictured in a Feb. 22 photo. He is the national director of Alpha for Catholics. Deacon Mitchell says Alpha, a worldwide Christian course, is a way "to explore life's biggest questions through the lens of Christian faith." (CNS photo/Dave Hrbacek, The Catholic Spirit)

“Why do I have three Super Bowl rings and still think there’s something greater out there for me?” Brady asked on “60 Minutes” in 2009. He later said, “There’s got to be more than this. … I wish I knew.”

Deacon Mitchell, who ministers in the Archdiocese of Detroit, conjectured that five Super Bowls still haven’t filled that desire for something “more than this.” A Michigan native who works to promote the Alpha course in a Catholic context, the deacon said it breaks his heart to hear Brady’s existential plight.

Deacon Mitchell described Alpha as a course “to explore life’s biggest questions through the lens of the Christian faith in a friendly, open and informal atmosphere through 10 interactive questions. No pressure, no follow-up, no charge.”

He spoke recently to more than 40 priests, parish faith formation staff members and volunteers in the Archdiocese of St. Paul and Minneapolis who gathered to learn about Alpha.

The course started at an Anglican church in London. An Anglican priest, the Rev. Nicky Gumbel, spread it to other churches in 1990. The course runs at churches across the world and has been adapted for use in the Catholic Church.

“Everything there is in the (Apostles’) Creed, which we believe,” Deacon Mitchell said.

Alpha can work in Catholic parishes because of its focus on the “kerygma,” the basic components of the Gospel message. In the Catholic context, Alpha includes bishops’ recorded talks about presenting the basics of the Gospel. While the course is the same one offered in other Christian churches, the environment is different.

“You’re inviting them to the Catholic Church,” Deacon Mitchell said. “If you don’t invite them, someone else (from another church) will.”

While Alpha has been designed to reach people of all ages, its design has been tailored to connect with a man in his mid-20s, who is typically going through a number of life transitions, and whom Deacon Mitchell considers part of the toughest demographic to reach. It also gets back to an essential component of a Catholic’s life.

Starting with the great commission, the call of Jesus to “make disciples of all nations,” the call of the Catholic Church has always been the salvation of souls, which begins with evangelization. Deacon Mitchell said evangelization starts with relationships, an experience he had in coming back to Jesus while wandering from the church as a young adult. Some friends encouraged him to take another look, leading him to a deeper prayer life and journey back to the church.

Alpha sets the table for spiritual nourishment with what Deacon Mitchell calls “radical hospitality.” It means putting a quality experience above and beyond coffee and doughnuts. It also means that volunteers provide a welcoming atmosphere even when visitors share things that don’t fit in at a parish.

“Heresy has to have a place at the table, in order for the seeker to feel welcomed and eventually come back,” he said.

Alpha covers 11 topics in 11 weeks, the first night starting with the question, “Is there more?” The course guides people through Jesus’ life and death, the virtue of faith, prayer, Scripture and God’s providence.

Alpha provides the resources free to use online and download, thanks to donors who in 2016 made it possible for parishes to access the program. The website is https://alphausa.org.

Bringing Alpha to a parish takes prayer, recruiting and training of a volunteer team. It also is necessary to pilot the program on a small scale once in the parish before rolling it out on a larger scale. It takes volunteers to work in the kitchen and be welcoming hosts. Deacon Mitchell emphasized keeping a good ratio of hosts to guests. He encourages volunteers to “be creative.”

He recommended starting the course following Christmas and Easter because of the higher Mass attendance at those times of the year.

“As they come, and they see it done with excellence, they say, ‘I can invite my friend to this,'” he told the group.

Follow-up programs such as Formed and Disciple exist for parishes to deepen discipleship after evangelization, he said.

“Discipleship and evangelization all happen at the speed of relationship,” Deacon Mitchell said.

NEXT: Committee in vote along party lines sends Gorsuch nomination to Senate