Atop Mount Nebo, Christians pray for those in Mideast facing violence 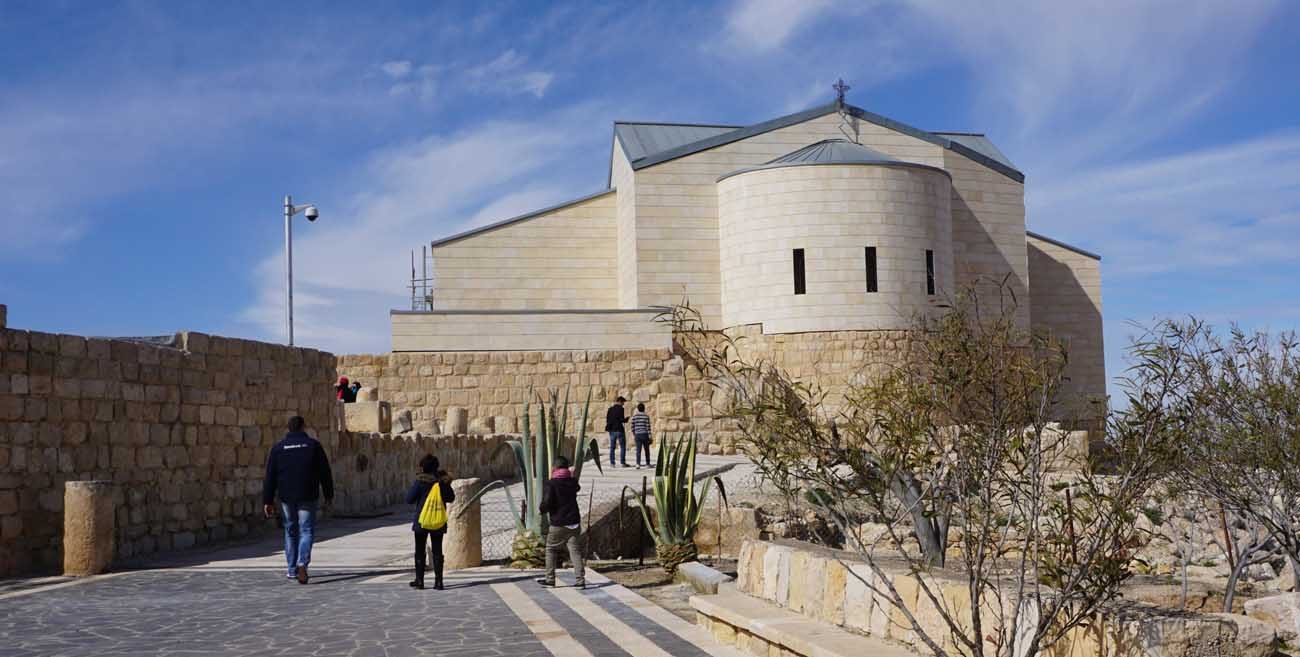 MOUNT NEBO, Jordan (CNS) — Christians of many denominations gathered for an Easter sunrise service atop Mount Nebo and prayed for peace and for Christians in Egypt, who were not celebrating as festively.

Many were thinking of the Palm Sunday twin suicide bombings targeting Christians at two Coptic Orthodox churches in Egypt.

Jordanian authorities stepped up security around churches and other sensitive areas in the aftermath of the assaults. Many Christians still consider Jordan a relatively safe haven compared to other Mideast countries because of the religious tolerance fostered by its moderate Muslim ruler, King Abdullah II.

The international English-language Easter service drew scores of Jordanians and others from around the world to the Franciscan-run basilica — built in 597 on a fourth-century church foundation — and its famed Byzantine mosaic pavements. It was the first such service after a decade of restoration prevented use of the church.

“It’s an honor and a blessing to worship here on Easter, particularly when there is so much difficulty and pain in neighboring countries,” American teacher Jennifer LaChonce told Catholic News Service.

One middle-aged Jordanian, who said she was born in Bethlehem, West Bank, and just gave her first name, Randa, told CNS: “We have always celebrated Easter here since I was 6 years old. The renovation took a very long time. We like being at Mount Nebo, especially facing the Holy Land.”

The Rev. Serag Mergerdichian, an Armenian Evangelical Church pastor who served in Aleppo, Syria, for 20 years, shook his head in sadness over the six-year conflict destroying his native country.

“Unfortunately, we were living in a golden age, and now we are living in the Stone Age,” he told CNS. 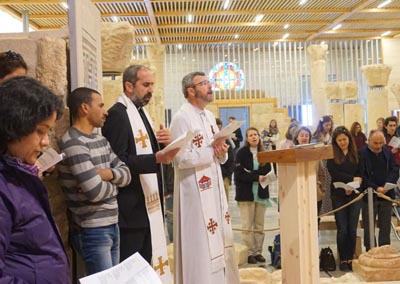 The Rev. Malcolm Forrest of the International Anglican Church of Amman, in white, presides over an Easter sunrise service April 16 at the Moses Memorial, a Franciscan basilica on Mount Nebo. (CNS photo/Dale Gavlak)

“Jesus is always alive and in him we have hope. So we try to encourage others to hold on to their faith in the risen and living Lord,” said Rev. Mergerdichian, who currently ministers in Beirut. “Let the prayer be God’s will, and God’s will is peace.”

Mount Nebo is believed by ancient tradition to be the site where Moses saw the Promised Land and died. A church and monastery, run by the Franciscan Custody of the Holy Land, are perched atop this 3,300-foot mountain facing the northern end of the Dead Sea. Drawing Christian pilgrims throughout the centuries, Mount Nebo is considered one of the most important pilgrimage, tourist and archaeological sites in Jordan and the Holy Land.

The Rev. Malcolm Forrest of the International Anglican Church of Amman participated in the Easter service.

“For many years, they (Anglicans) have come to Mount Nebo to celebrate Easter Mass here,” Franciscan Brother Riccardo told CNS.

However, in neighboring Egypt, Easter celebrations were somber and subdued, with many mourning 45 Coptic Christians killed in twin bombings April 9. The Islamic State group claimed responsibility for the bombings.

“There were plenty of people coming for the Easter services at the churches because they did not want to be intimidated,” Father Rafic Greiche, spokesman for the Egyptian Catholic bishops, told CNS by phone. “But there is a deep sorrow inside the hearts of the people.”

Father Greiche said the Catholic, Orthodox and Protestant churches in Egypt refused to receive government officials for Easter greetings, in part out of mourning and anger over security failures to protect Egypt’s ancient Christian community, among the oldest in the Mideast.

The Coptic Orthodox churches in Egypt’s southern city of Minya, where the highest Coptic Christian population is found, had announced there would be no Easter celebrations, but liturgical prayers held “without any festive manifestations.”

Under the shadow of heavy security, hundreds of mourners filed past a flower-strewn memorial at the Church of St. George in Tanta, the site of the first bombing on Palm Sunday. The church still shows substantial signs of damage. Egyptians bowed their heads and prayed in front of wreaths and crosses laid out to commemorate the dead.

In the Mediterranean port city of Alexandria, worshippers passed through a metal detector at the entrance to St. Mark’s Cathedral, the historic seat of the Coptic pope and the second of two sites attacked April 9. Coptic Orthodox Pope Tawadros II was in the cathedral when an explosion went off outside the church.

NEXT: Philippine archbishop rebukes faithful: ‘I am a Catholic but …’