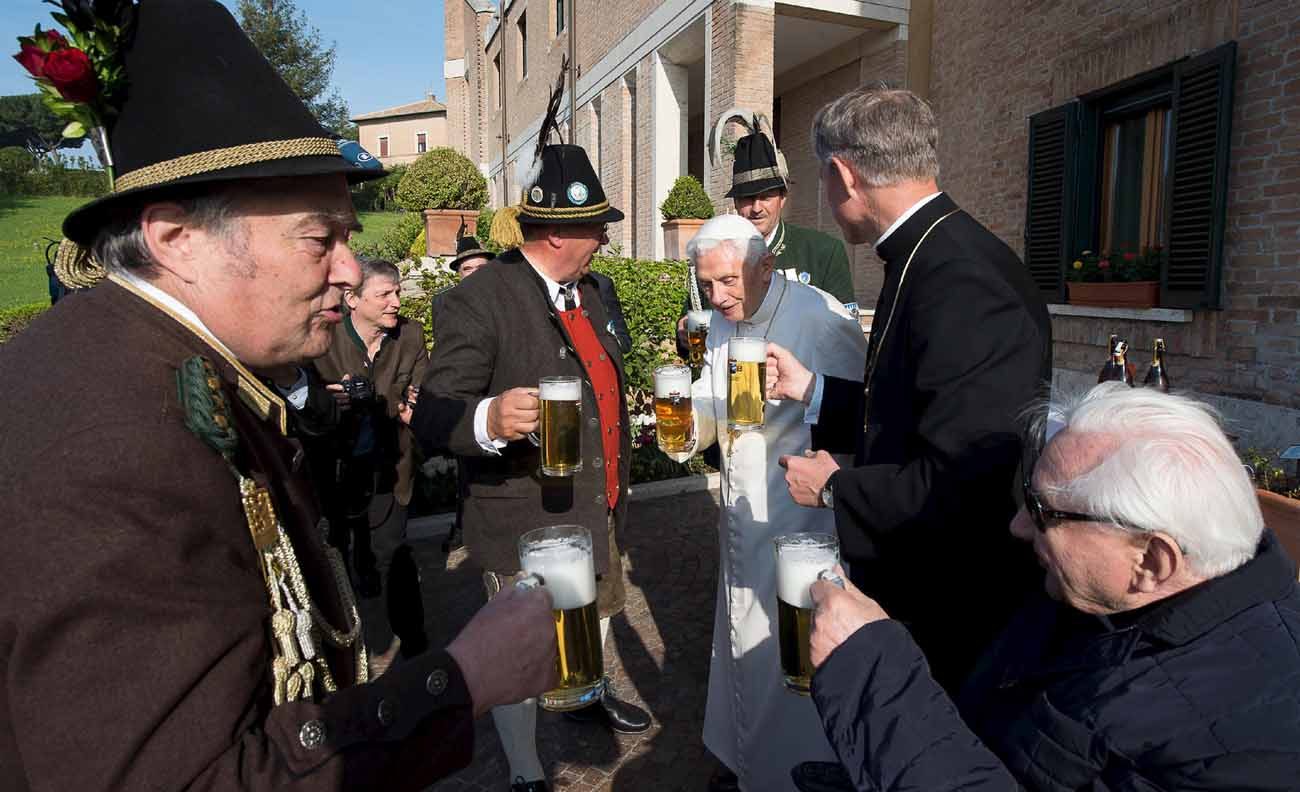 Retired Pope Benedict XVI makes a toast during celebrations marking his 88th birthday in 2015 at the Vatican. Before he was elected Pope Benedict XVI, Cardinal Joseph Ratzinger once wrote he was grateful for being born April 16, 1927, a day that fell during the church's most intense liturgical season. (CNS photo/L'Osservatore Romano)

VATICAN CITY (CNS) — Before he was elected Pope Benedict XVI, Cardinal Joseph Ratzinger once wrote that he was grateful for being born on a day that fell during the church’s most intense liturgical season.

Born and baptized on April 16, 1927, which was Holy Saturday that year, “my life from the beginning was immersed in the paschal mystery, which could not be anything other than a blessing,” he wrote in his book, “Milestones.”

This year, the retired German pope turns 90 on Easter Sunday — and like many past birthdays, it will be very low-key with a few visitors and a decidedly “Bavarian” touch, according to Archbishop Georg Ganswein, prefect of the papal household and personal secretary to the retired pope.

“This is the only thing he accepted,” the longtime aide told the Italian weekly television talk show, Matrix, “because he doesn’t want a big party.”

Cards and letters have been pouring in, the German archbishop added, and certainly there will be some presents, including a “Festschrift” — a collection of essays celebrating the work of a well-known scholar on an important occasion — in this case Pope Benedict and his 90th birthday.

Creating a commemorative volume is a popular German tradition among academics and one that the pope is very familiar with. He has received them before, including one from the University of Notre Dame in 2012 for his 85th birthday, which featured essays by theologians and scholars who reflected on the past 60 years of Joseph Ratzinger’s theology, writings and teachings.

This year, the Vatican publishing house and the Joseph Ratzinger-Benedict XVI Vatican Foundation pieced together a “Festschrift” titled after the pope’s episcopal motto, “Cooperatores Veritatis” (Co-workers of the truth).

It was written by all 13 winners to date of the “Ratzinger Prize,” an award to distinguished scholars in theology or related studies. They are an Anglican Biblicist, an Ambrosian priest; a French philosopher, a Polish theologian, a U.S. Jesuit, a Brazilian Jesuit, a Spanish theologian, a Cistercian abbot in Austria, a Lebanese scholar, a Greek Orthodox theologian, a French theologian, a German theologian and an Italian historian.

The essays, published in their original language, cover a wide range of topics such as the pope’s contributions to: understanding the church’s relationship with Judaism; seeing Christian-Islamic dialogue in light of Vatican II; Christianity and culture; and understanding Jesus of Nazareth through his trilogy — the first volume of which was released in 2007 on the pope’s 80th birthday.

While each author focused on a topic related to his or her specialized research, they folded in the impact or implications Ratzinger-Benedict’s teachings have had on their work.

One legacy the authors highlighted was how Joseph Ratzinger — the professor-theologian-Christian, and Benedict, the pope, sought to embrace and harmonize so many artificially divorced aspects of human existence: theory and practice; words and deeds; faith and reason; intelligence and feeling; science and religion; the material world and the transcendent; subjective experience and objective truth.

“Even with his shyness,” wrote Jesuit Father Mario De Franca Miranda, he showed the way toward “the realization of this difficult synthesis.”

Pope Benedict demonstrated that reason needs faith if questions about life and human existence are ever going to have a meaningful response and avoid irrational or fanatical beliefs, wrote the Brazilian theologian, who worked with Cardinal Ratzinger with the International Theological Commission.

Faith, too, demands reason because faith in God is always a free, rational, conscious response to experiencing God’s loving presence, he added.

Love is always the great mover and shaker, the priest wrote.

Love, not blind obedience, is what motivates an authentic desire to seek out and follow God, and reach out to one’s neighbor because it draws people out of their shells and changes them from within, letting them see the world with new eyes, he added.

That is why Pope Benedict always insisted evangelization is about attraction. Realizing God is love is attractive and it opens the heart up to faith — a trusting surrender to someone “who loves me and wants me to be happy.”

U.S. Jesuit Father Brian E. Daley, a patristics expert and professor of theology at the University of Notre Dame, looked at a topic near to Pope Benedict’s heart: what the church fathers said about faith and reason, and the role of love.

St. Augustine taught that authentic faith isn’t found in a “heavy tome,” but is accessed when one’s heart is set on fire with love, he wrote.

“Faith is not a blind surrender to the irrational,” rather it is the quest for true meaning, the “logos” and truth itself, the U.S. Jesuit said.

The 460-page commemorative volume gathers just a slice of the kind of rigorous research still being done today “in the light of faith,” and in the footsteps of a 90-year-old pope.

They are presented as fellow “co-workers of the truth,” whose widely diverse contributions, Father Lombardi wrote, “appear like so many arrows loosed from different vantage points, but all aimed at a single target” — experiencing the embrace of truth and love.

NEXT: Saving lives must be first concern of immigration policy, pope says