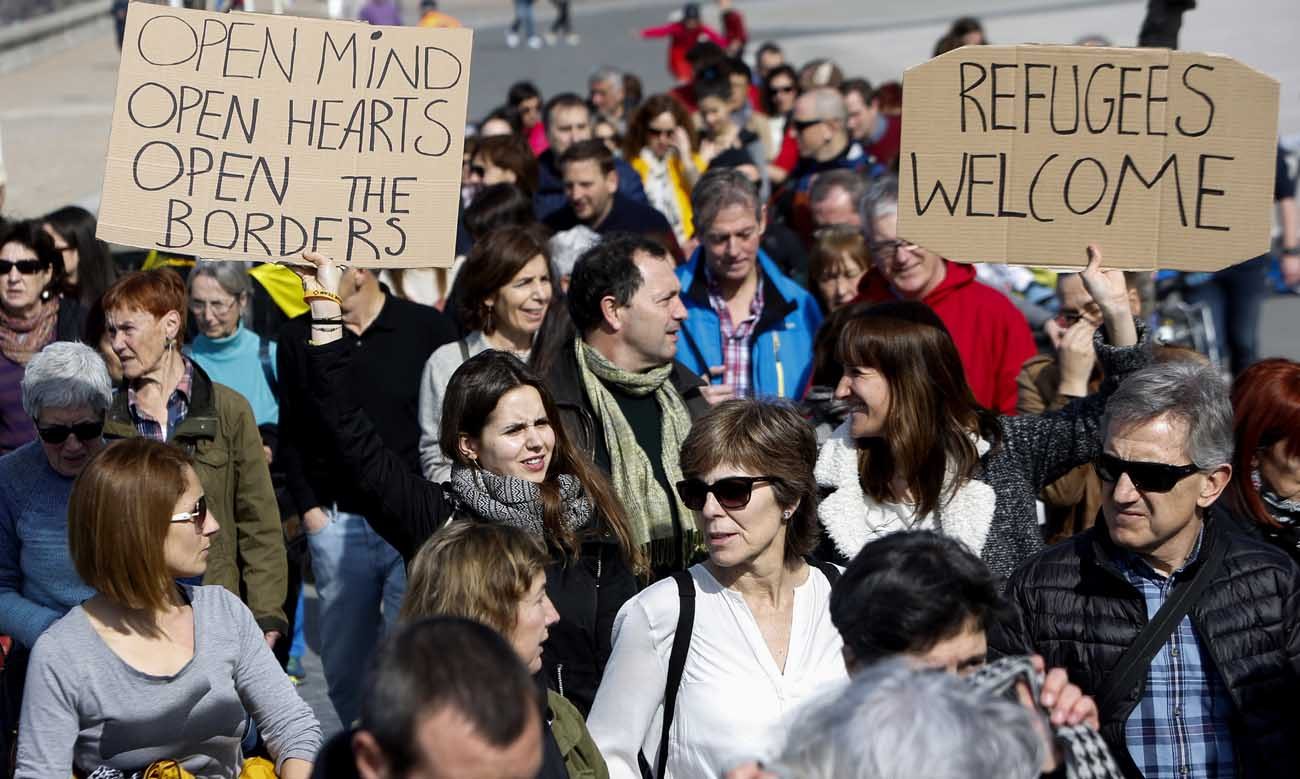 People take part in a Feb. 26 march to support refugees in San Sebastian, Spain. Members of the Catholic Church have an obligation to recognize the value of welcoming newcomers, Pope Francis said. (CNS photo/Javier Etxezarreta, EPA)

VATICAN CITY (CNS) — The defense of the life, dignity and human rights of migrants and refugees must come before any other question when enacting migration policies, Pope Francis said.

“The defense of human beings knows no limits,” the pope said in an interview with the journal of the Department for Civil Liberties and Immigration of the Italian Ministry of the Interior.

“Those in power,” he said, “must be both far-sighted and coherent in watchful respect for fundamental human rights, as well as in trying to end the causes which force civilians to flee.”

Of course, he said, a safe and humane approach to handling the current global migration crisis requires international cooperation and policies that “respect both those who welcome and those who are welcomed.”

Newcomers must respect the laws of their host countries and be assisted in integrating into the life of their new communities, he said in the interview published April 7. And members of the receiving community must be educated to understand the real causes of migration and the desperate situations of those who feel forced to flee their homes.

The news media play a big role, Pope Francis said. They should explain the human rights violations, violence, poverty and catastrophes that lead so many people to flee.

But, especially, he said, the media must report responsibly and not simply “indulge in negative stereotypes when talking about migrants and refugees.”

“Just think of the unfair terms often used to describe migrants and refugees,” the pope said. “How often do we hear people talk of ‘illegals’ as a synonym for migrants? This is unfair. It is based on a false premise, and it pushes public opinion toward negative judgments.”

Asked about his 2016 trip to refugee camps in Lesbos, Greece, with leaders of the Orthodox Church, Pope Francis said it was a sign of “fraternal responsibility.”

“We are all united in wanting to ensure a dignified life for every man, woman and child who is forced to abandon his or her own land,” the pope said. “There is no difference of creed that can outweigh this wish — in fact, quite the contrary.”

Pope Francis said he wished the political leaders of every nation would show the same kind of joint concern for “the cries of the many innocents who ask only for a chance to save their own lives.”

As for anti-immigrant feelings and fears among some Europeans, the pope urged people to remember what Europe was like after World War II.

Millions of Europeans immigrated to South America or the United States, he said. “It was not an easy experience for them, either. They had the burden of being seen as foreigners, arriving from afar with no knowledge of the local language.

“The process of integration wasn’t easy, but for the most part it ended in success,” Pope Francis said.

Countries that have grown and thrived over the centuries by accepting and integrating newcomers cannot forget that experience or pretend it will not be repeated today, he said.

For example, “Europeans contributed greatly to the growth of trans-Atlantic societies,” those in North and South America. “This is always the case: Any exchange of culture and knowledge is a source of wealth and should be valued as such.”

Members of the Catholic Church have an even greater obligation to recognize the value of welcoming newcomers, Pope Francis said. “We can see the peaceful integration of people from other cultures as a kind of reflection of its Catholicism. A unity which accepts ethnic or cultural diversity constitutes a dimension of church life, which in the spirit of Pentecost is open to all — open to embracing everyone.”

NEXT: Conference aims to give young people a voice ahead of synod, WYD