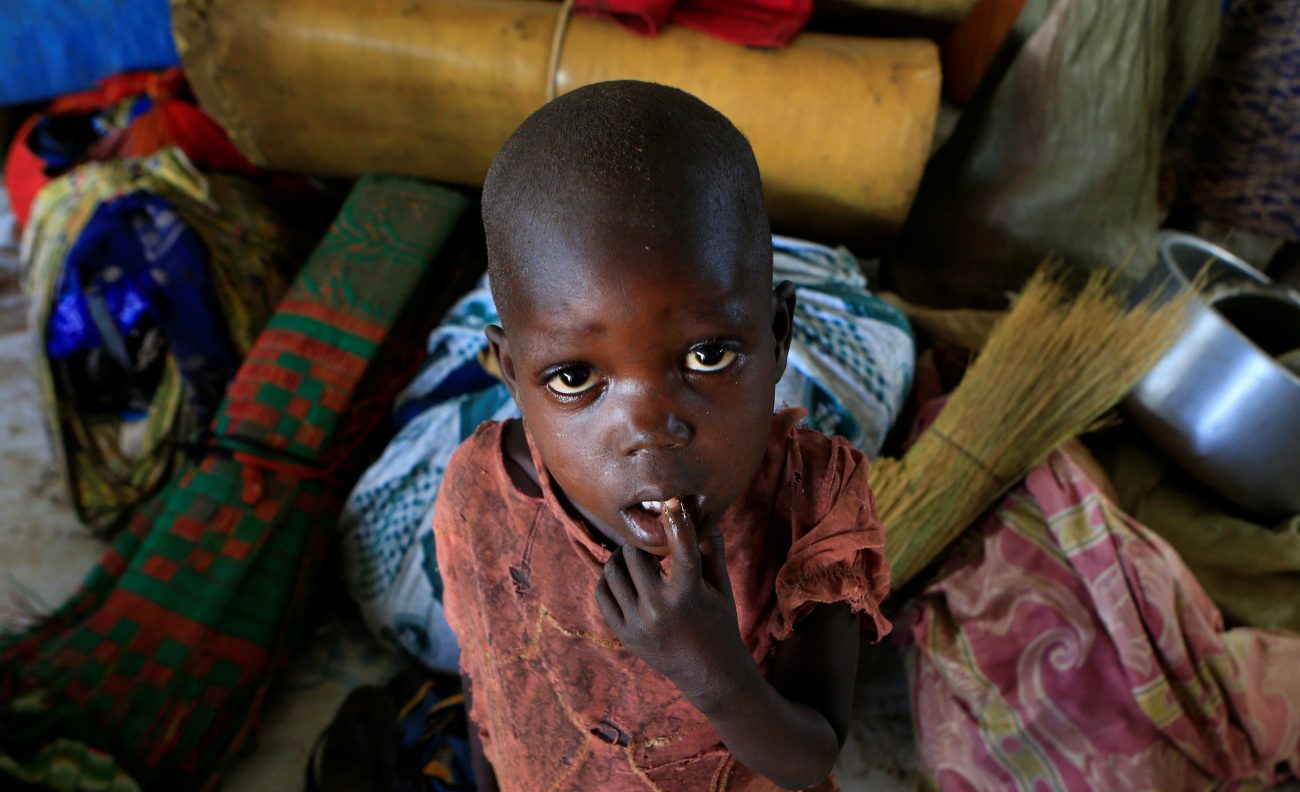 A boy from South Sudan stands next to his family's belongings April 5 at a camp for displaced people in Lamwo, Uganda. As civilians are increasingly targeted in South Sudan's civil war, a bishop urged prominent community leaders speak out. (CNS photo/James Akena, Reuters)

“You have the strength, the power, the influence and obligation to use whatever you have at hand to solve the problems facing the people” in the town of Wau and other parts of the greater Bahr el Ghazal region, Bishop Edward Hiiboro Kussala of Tombura-Yambio, president of the Sudan Catholic Bishops’ Conference, said in an April 6 letter to the elders of the region.

Urging the elders “to recognize the urgency and gravity of the situation,” the bishop told them that “Wau, your historical city, is now in a critical situation” without the “beauty and greatness” for which it was once renowned.

“The hatred and suffering” he witnessed on a March visit to Wau “brought me into uncontrollable tears,” Bishop Kussala said, noting that he had found “death, hate, hunger, huge displacement, intolerance, empty and destroyed infrastructure, senseless killings and disarray.”

Civil war broke out in 2013 after President Salva Kiir, a Dinka, fired his deputy, Riek Machar, a Nuer. Fighting has often split the country along ethnic lines.

According to Reuters news agency, fighting was renewed in Wau April 10 as militias aligned to the government were said to be going from house to house, searching for people from other ethnic groups.

Kiir was born in the Bahr el Ghazal region, which is widely viewed as a government stronghold.

“The moral authority of the elders can bring a significant and meaningful breakthrough in this extremely troubling” time, Bishop Kussala said.

“As one of the largest power blocs in South Sudan, also as elders of the region, you have a moral obligation to take action,” he said.

“Engage all stakeholders in the communities without preconditions” and “support all groups who seek peace through reconciliation,” he said.

Bishop Kussala also urged the elders to “allow room for people to speak out and listen,” noting that probes into atrocities and holding perpetrators to account can be done later, “but now is the time to stop” the war.

“Call urgently for immediate humanitarian intervention for the starving people in and outside Wau,” and “urge the authorities to open roads and support aid workers” in getting aid to those who need it, he told the elders.

Noting his appeal in March to the “great daughters and sons” of the Bahr el Ghazal region “to find strength in your history to revive the spiritual, cultural and political richness of Wau, which used to have an important influence on the entire nation of South Sudan,” Bishop Kussala said, “I now beseech you, please stop, retreat and move together to solve the problem.”

Noting that “attacks on innocent civilians seriously undermine the confidence in the once great people of Wau,” he urged that the memory of Bishop Rudolf Deng Majak of Wau, who died March 6, be honored by the region’s leaders forming “part of the reconstruction, reconciliation and reintegration of our country, which is still ravaged by the war against ourselves.”

The elders must take the lead “in finding an immediate solution to the suffering in Wau” and the region, and “must change the dynamic and preserve the possibility of peaceful resolution,” Bishop Kussala said.

“Only you have the power to change the course of your city for the better,” he said.

NEXT: CNEWA head: Next few months will decide Christians’ fate in scarred Iraq