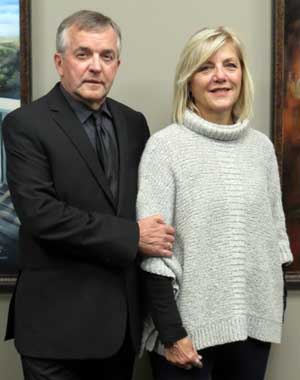 Phil and Mary Wrubleski of the the Diocese of Saskatoon, Saskatchewan, are pictured in a March 7 photo.  (CNS photo/Merv Hey)

SASKATOON, Saskatchewan (CNS) — Phil and Mary Wrubleski are eager to bring practical marriage enrichment opportunities to couples in the Diocese of Saskatoon.

The couple, who chair the diocesan marriage task force, are examining marriage mentoring, in which a younger couple is invited to meet monthly with a more-established couple in the parish who is trained to engage in helpful conversations about marriage, life and children.

The diocesan task force has been connecting with FamilyLife Canada, looking into the training required to prepare mentor couples for this role, said Phil Wrubleski. The strength of marriage mentoring is that it is low-key, relational and grounded in real-life experience, based on the idea that “most marriages don’t need an overhaul, just regular tuneups.”

Couples who have weathered difficulties have a lot to offer younger couples, said Mary Wrubleski. “Phil and I would not still be together had it not been for the crises we went through together. You develop tools, your marriage gets stronger.”

Sharing insights with younger couples in a social setting can plant seeds and provide critical support that helps a marriage grow rather than breaking up.

In recent years, the diocesan Marriage Task Force has led initiatives such as marriage enrichment evenings, re-examining marriage preparation materials, and leading discussions on marriage and family life in response to the world Synod of Bishops on the family.

Finding new ways to strengthen marriages in an era when programs such as Marriage Encounter have ebbed is a priority, said Phil Wrubleski.

Married couples seem to be getting into trouble earlier, said Mary Wrubleski, adding, “We need something more between Marriage Preparation and Retrouvaille (aimed at marriages in crisis).”

The Marriage Task Force is working with other Saskatchewan dioceses on a study guide on “Amoris Laetitia,” Pope Francis’ postsynodal apostolic exhortation on marriage and family life. In addition, the document will be featured at a provincial Catholic conference in Saskatoon next spring.

“Amoris Laetitia” is “a pastoral document,” said Phil Wrubleski. “It is timely and very brave.”

He said it does not shy away from the real challenges facing families, and it is filled with hope for healing and strengthening ordinary family life, aligning with Pope Francis’ image of the church as a field hospital, tending to wounds in the world.

“We need to remember how many people we meet and talk to have a situation that is real, that is difficult. They need to be listened to and loved,” Mary Wrubleski said.

The Wrubleskis also hope to attract other married couples from all areas of the diocese to participate in the work of the Marriage Task Force and move toward putting other ideas into action — including digital outreach.

“We want to offer people something to sink their teeth into, to get more things into motion,” said Phil Wrubleski.

NEXT: Interfaith group reports on Philippine drug-related killings to U.N.