Global Catholic population tops 1.28 billion; half are in 10 countries 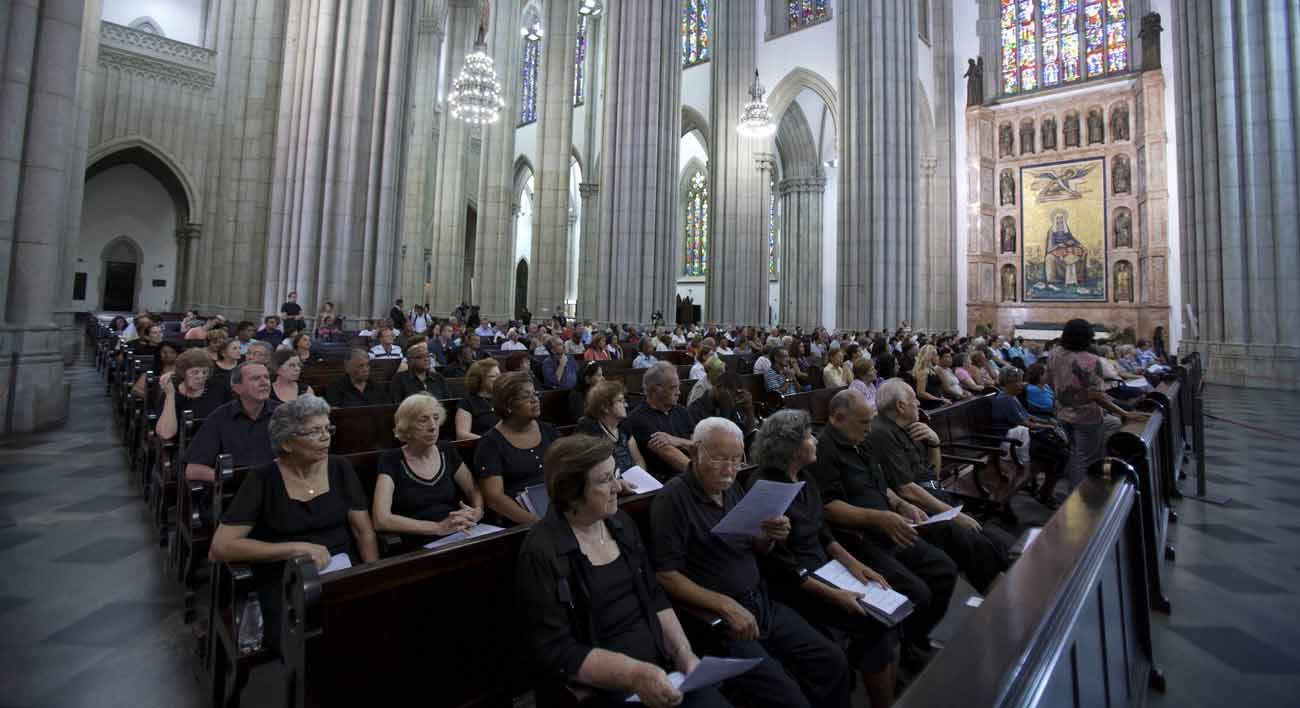 People attend Mass in 2013 at the cathedral in Sao Paulo. Brazil is one of 10 countries with the most Catholics that account for almost 56 percent of the world's Catholic population, the Vatican reported.(CNS photo/Sebasti o Moreira, EPA)

VATICAN CITY (CNS) — Taken together, the 10 countries with the most Catholics account for almost 56 percent of the world’s Catholic population, the Vatican reported.

The 2017 “Annuario Pontificio,” or Vatican yearbook, and a new edition of the Vatican Statistical Yearbook report that the countries with the most Catholics are, in order: Brazil, Mexico, Philippines, United States, Italy, France, Colombia, Spain, Congo and Argentina.

The number of baptized Catholics grew 1 percent in a year to reach 1.285 billion as of Dec. 31, 2015, the date to which the statistics in both books refer.

Looking at the period 2010-2015, the global Catholic population increased by 7.4 percent, the Vatican said. Africa continued to be the continent with the largest percentage growth, increasing by 19.4 percent over the same five-year period. The increase in Africa outpaced the growth of the general population.

Of the world’s 1.285 billion Catholics, it said, almost 49 percent live in North or South America, including the Caribbean. Europe is home to 22.2 percent of the global Catholic population; 17.3 percent are in Africa; 11 percent are in Asia; and just under 1 percent are in Oceania and the South Pacific.

The number of bishops and of permanent deacons were the only two of those categories to experience growth from 2014 to 2015. Potentially stalling a trend of annual growth that began in 2000, the number of priests in the world dropped by 136 during 2015. The increased number of diocesan and religious-order priests in Africa could not make up for the strong drop in Europe, which lost 2,502 priests in one year.

Looking at a statistically more relevant period, 2010-2015, the number of diocesan priests globally rose, while the number of priests belonging to religious orders fell.

The impact on Catholics in the pew is obvious, the Vatican said. In 2010 there were an average of 2,900 Catholics for every Catholic priest in the world; in 2015, the ratio had climbed to 3,091 Catholics per priest.

The number of seminarians in the world, the office said, “touched a maximum in 2011” and has since experience “a gradual contraction. The only exception remains Africa, which for the moment does not seem to be touched by the vocations crisis and can be confirmed as the geographical area with the greatest potential.”

NEXT: Venezuelan bishops call for civil disobedience in constitutional crisis