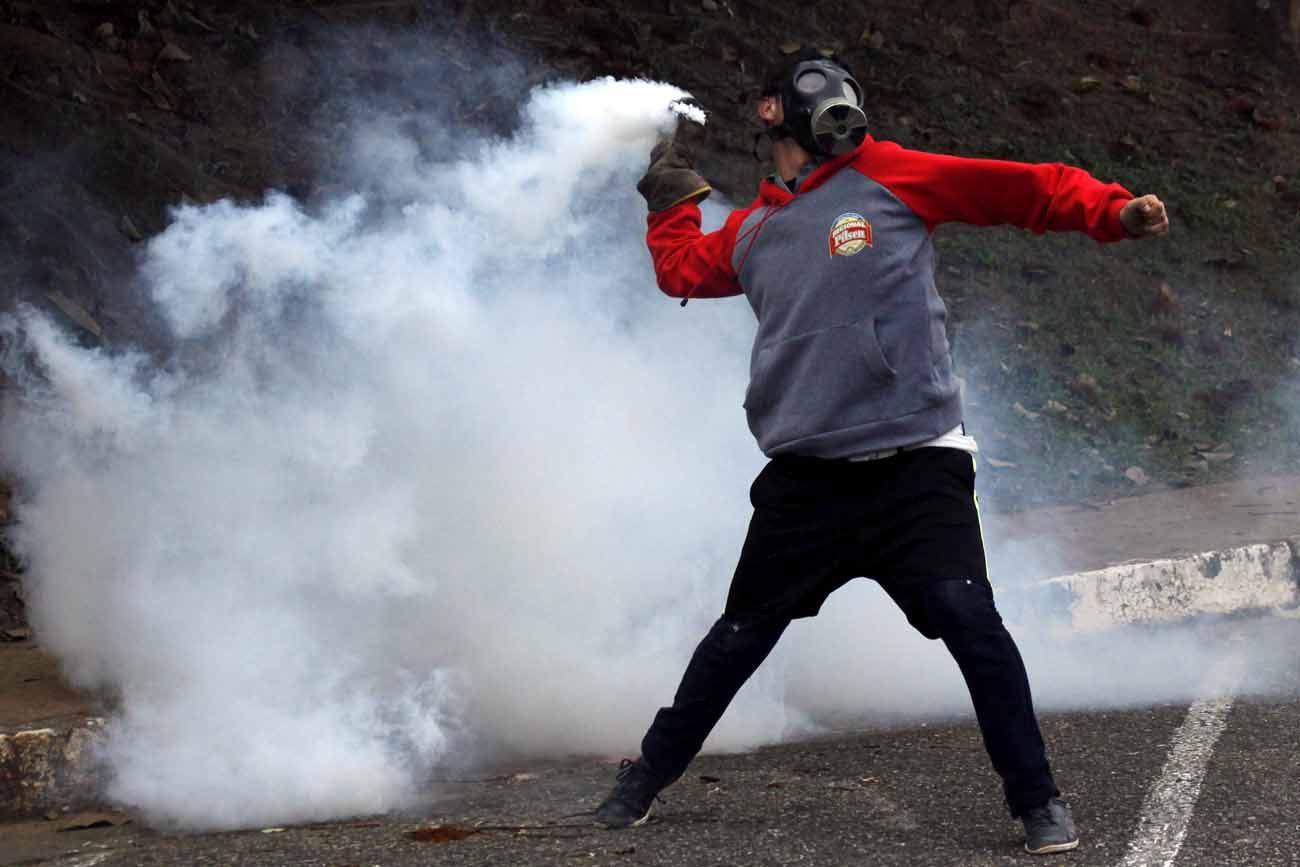 A demonstrator throws a tear gas canister back at police during an April 5 protest in San Cristobal, Venezuela. The nation's bishops have called for "peaceful civil disobedience" to restore constitutional order. (CNS photo/Carlos Eduardo Ramirez, Reuters)

CARACAS, Venezuela (CNS) — In response to a renewed constitutional crisis in the country, the Venezuelan bishops’ conference has called for “peaceful civil disobedience” to restore constitutional order.

“Venezuelans can’t remain passive, be intimidated, or lose hope,” the bishops wrote in an eight-point communique released March 31. “It’s time to ask ourselves seriously and responsibly if civil disobedience, peaceful demonstrations, and fair complaints directed at national and international bodies are the valid and opportune path forward.”

The statement followed a decision by Venezuela’s Supreme Court March 29 to strip the country’s opposition-controlled parliament of its powers. In two separate rulings, the court’s constitutional chamber ruled that it would assume legislative duties.

The decision provoked sharp condemnation from around the world, with many calling it a coup and a lurch toward authoritarianism and dictatorship. Critics claim the court, responding to government orders, aimed to eliminate the country’s only opposition-controlled branch of government. The court cited parliament’s disregard for previous court rulings, arguing the assembly remained in “contempt.”

The bishops’ statement called the action “morally unacceptable” and “reprehensible.” It also mentioned the move as a “precipice toward dictatorship.”

“A nation without a parliament is like a body without a soul. It is dead, and all possibility of opinion, divergent or contrary to those in power, disappears,” it said. “This opens the door to arbitrariness, corruption, and persecution.”

The memorandum is signed by the eight bishops and archbishops that make up the episcopal conference’s governing body. Contacted by Catholic News Service April 5, Archbishop Diego Padron of Sanchez of Cumana, conference president, declined to offer more information beyond the official statement.

The court ruling sparked outrage among opposition supporters in the country, who have long denounced a lack of separation of powers and the overreach of the executive branch. Opposition leaders have called it further proof that the country’s courts act as a rubber stamp to President Nicolas Maduro’s orders. It also reignited street protests, which had lost steam late last year.

On April 3, Maduro declared all of Holy Week, which begins April 9, as a public holiday for the Easter holidays.

In their memorandum, the bishops urged Venezuelan Catholics to observe the traditional Easter celebrations as a way to “maintain hope, joy, and solidarity, in the midst of natural differences common among human beings.”

But the statement also added that, “for Catholics the commemoration of the abuses against Jesus Christ is an urgent call to consciousness and to act in a peaceful but blunt way against the attacks of power.”

In addition to the political unrest, Venezuela has seen its economy in free fall. Reuters reported that in 2016, Venezuela’s inflation reached 800 percent and the economy shrank by 18.6 percent. The country, which relies on oil for 96 percent of its export income, has long lived through boom-and-bust cycles according to the price of oil. But many consider the current economic downturn, now in its fourth year, to be the worst the country has seen.

Shortages of food and medicine are common, and many poor and middle-class Venezuelans spend hours, sometimes full days, in lines outside of pharmacies and supermarkets, waiting for the limited goods to arrive. Some have even have started to turn to the city’s trash to look for food.

At a street protest April 1, Julio Borges, president of the National Assembly, told people, “Now more than ever, history is asking us to go to the streets and fight for our country.” He then led the thousands in attendance to a nearby highway, shutting it down in protest. Those protesters were met by lines of national guard and national police, who eventually shot tear gas to disperse the crowds.

Those scenes were repeated April 4 during the most violent clashes between protesters and police in years. Authorities deployed water cannons, rubber bullets, pepper spray, and tear gas to prevent thousands of demonstrators from advancing to downtown government buildings.

At least 20 have been injured in the ongoing unrest, including one person shot in the leg, and 18 have been arrested. Videos emerging on social media show police beating up protesters when they think cameras are not rolling. Demonstrators often use rocks to attack police lines.

PREVIOUS: Global Catholic population tops 1.28 billion; half are in 10 countries