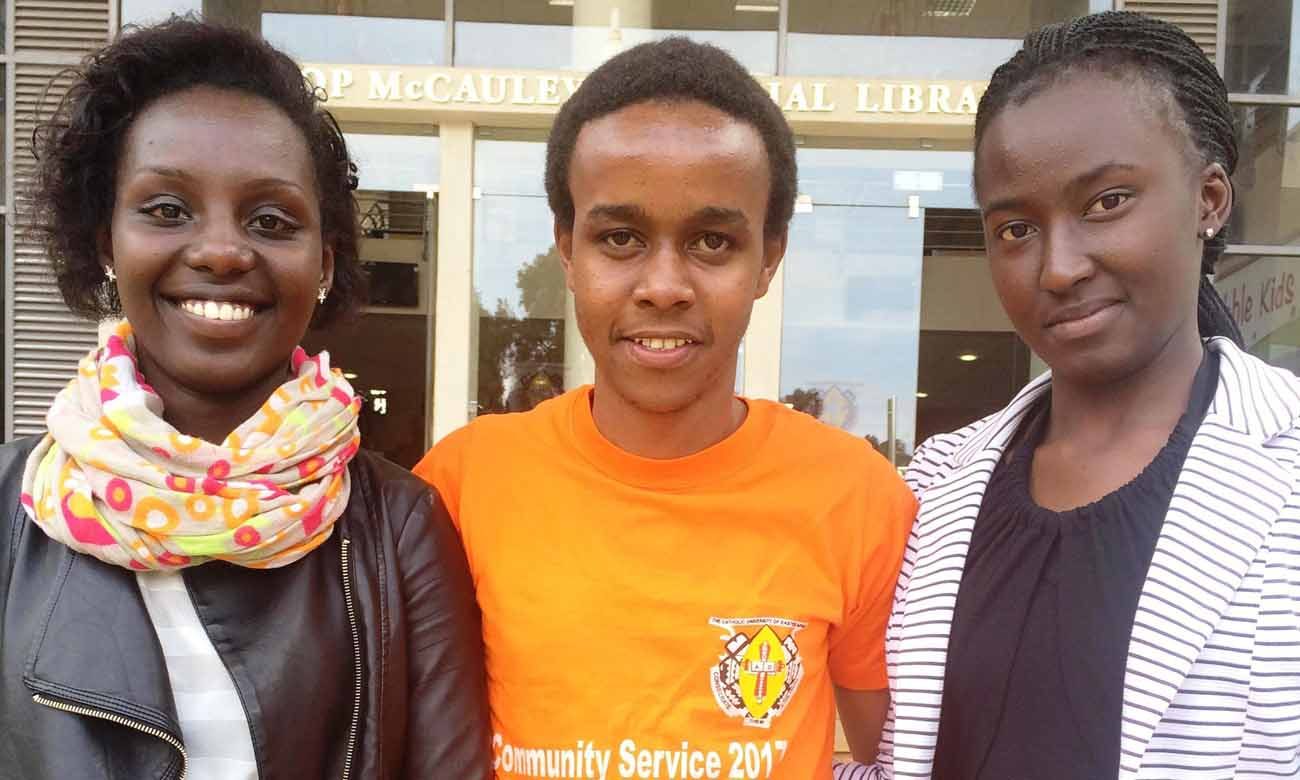 Karen Rono, Nelson Ng'ang'a and Betty Amutabi, students at the Catholic University of Eastern African in Nairobi, Kenya, pose for an April 12 photo on the campus. (CNS photo/Francis Njuguna) 7.

In the process, the students learned that even a small donation could go a long way to ease the threat of starvation facing thousands of people in arid parts of the country.

Karen Rono, 20, a third-year law student, contributed $50 to the cause, enough to buy several sacks of corn or rice. She said she also helped organize concerts to raise money for the effort.

Another law student, Nelson Ng’ang’a, 20, said that seeing images in various media of suffering people motivated him to support the effort.

“The local media has for some time been awash with news about the menace, sometimes with striking photos of emaciating people and their animals,” he said, describing scenes of people eating wild roots and animals dying of dehydration.

The weeklong campaign extended across the university’s four campuses in the region around the Kenyan capital.

The seriousness of the drought and its impact on rural communities was an obvious choice for the university’s annual charity appeal, said Justus Mbae, university vice chancellor.

Mbae sent the first truckload of food and supplies April 7 from the university’s main campus, known as Langata, waving a school flag as students watched.

“This year, the university chose to be in solidarity with our brothers and sisters affected by the drought,” he said. “This was in response to the call by the Catholic bishops and the government. We were called upon to live up to the community service pillar of our university and the call during this Lenten period.”

More than 20 million people in Kenya, Ethiopia, Somalia, South Sudan, Uganda and Tanzania are at risk of starvation if water, health care, shelter and food supplies are not provided, according to the United Nations Office for the Coordination of Humanitarian Affairs.

In March, the Archdiocese of Nairobi sent a convoy carrying 80 tons of food and $16,500 in cash to communities in the dioceses of Isiolo and Marsabit.

Aid agencies and the U.N. intensified efforts in mid-April to distribute food and supplies in a wide swath of the African continent.

Organizers of the university drive said they wanted to collect enough money and donations of materials to send 8 to 10 tons of food and supplies to the affected area in Kenya’s northern region.

Some students were pleased to be able to offer whatever assistance they could afford.

“I have managed to raise money that has afforded me to purchase two sacks maize (corn) flour. I thank God for this,” said Esther Wambui, 22, who is studying law.

Bob Oyoo, a business major, said he made a small contribution to the effort, enough to purchase about 4 pounds of rice. “This is all that I could afford as per now,” he said.

Elsewhere, Maryknoll Father Joseph Healey, an American missionary, told Catholic News Service that participants in the small Christian communities program with which he works raised about $300 in response to the crisis. He said members of the communities were moved after hearing about shortages of water and food and wanted to show solidarity with fellow Kenyans.

NEXT: In violent hot spot, Washington parishioner finds hope of the Resurrection