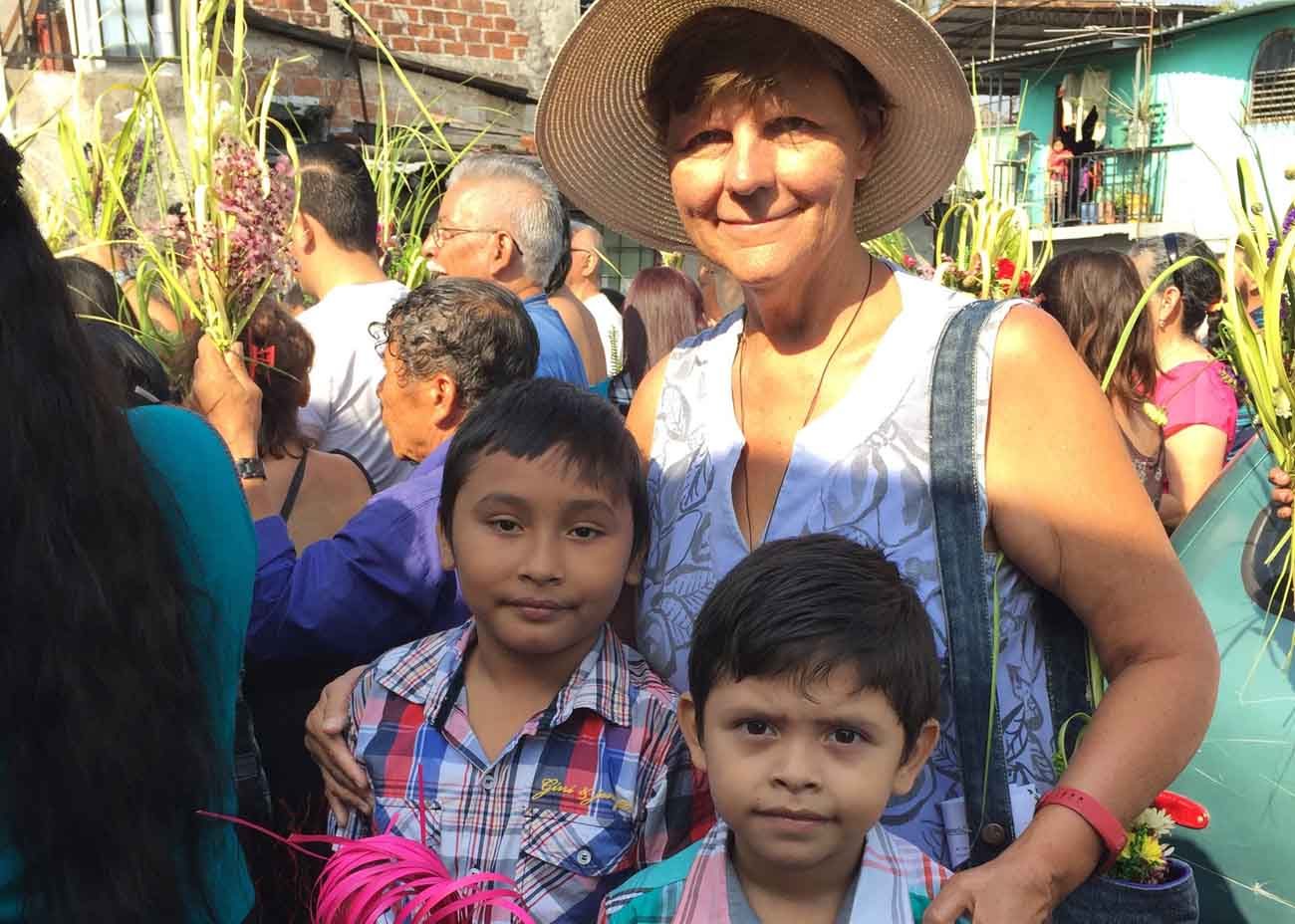 Margie Legowski, a member of Holy Trinity Catholic Church in Washington's, poses for a Palm Sunday photo April 9 with children from Holy Trinity's sister parish, Maria Madre de los Pobres Church in San Salvador, El Salvador. The sister parish is in one of the most dangerous zones of San Salvador, but it also offers great spiritual lessons of hope and love during Holy Week, says Legowski. (CNS photo/courtesy Margie Legowski)

SAN SALVADOR, El Salvador (CNS) — Far from the Easter baskets and dresses, the pastel-colored candy and the White House Easter egg roll, Washington resident Margie Legowski found herself anticipating her second Easter season surrounded by some of the most impoverished masses of El Salvador.

She decided to spend Holy Week 2017 in a section of San Salvador considered so violent by locals that it’s difficult to find a taxi to take you in or out.

Legowski, a parishioner at Holy Trinity Catholic Church in Washington’s tony neighborhood of Georgetown, said she has found that the place known as La Chacra is one of the top places she’d rather spend the holiest of days in Christianity.

There’s nothing like it, said Legowski, who mingled about with the locals of Maria Madre de los Pobres, or Mary Mother of the Poor Catholic Church, participating with them in religious processions with life-size statues of the saints through the streets of La Chacra, meditating with the neighborhood’s Catholic residents on the real-life Stations of the Cross they endure.

La Chacra is filled with those who identify with the pain and suffering associated with the Stations of Cross en route toward the Resurrection because they go through tougher challenges than most people in daily life.

Many of them have seen their children die in the rampant gang killings that plague their neighborhood almost daily.

They’ve seen the children, and other youth they’ve known, flee in the middle of the night, never to return after they’ve refused to join a gang against their will. They’ve seen their neighbors and friends suffer after gang members drop by their homes to collect “rent,” the name the vandals have given to the organized extortion, a monthly fee they impose on La Chacra’s poverty-stricken residents. They suffer marginalization by others in San Salvador who alienate them sometimes simply because of the place where they live.

“Every week is Holy Week here,” because of the suffering, said Legowski.

For more than 20 years, her Washington parish has had a “sister parish” relationship with Maria de los Pobres so the problems of La Chacra are well-known to Legowski and other Holy Trinity parishioners who make regular visits throughout the year to “accompany” their fellow Catholics at the Salvadoran parish. There’s a lot of joy and kinship that has developed between the two parishes that couldn’t be situated in more different environments.

The Jesuit-run Holy Trinity Church in Washington is surrounded by homes of some members of Congress, diplomats and other Washington notables. John F. Kennedy occasionally attended Mass there when he was U.S. president. Maria Madre de los Pobres’ claim to fame is that, because of its high homicide rate, it’s appeared in the pages of The New York Times and other publications whenever there’s a need to illustrate the depravity of gang violence in Latin America.

But the way Legowski sees it, the sense of community and faith found in La Chacra, makes it also a place to strengthen and fill one’s spiritual well.

She said saw a real-life Stations of the Cross in a recent incident in which a community member named Carlos was stripped, beaten, and left for dead, or in a mother mourning the murder of her son at the hands of local gangs.

In another church nearby, during a “migrant Via Crucis” focused on those who are forced to flee their native countries, she thought about Jesus’ suffering during one of the stations depicting one of the many Salvadoran women who have left the country for the U.S. looking for work. The scene at that particular station depicted an injured migrant near the U.S.-Mexico border. Like the biblical Veronica, who stepped in to wipe Jesus’ forehead when he was carrying his cross to Golgotha, another woman, a Veronica of sorts, stepped in to wipe the brow of the migrant.

“I now see the (Stations of the Cross) as something present in our lives, in the here and now, and not just a series of events that happened to one man 2,000 years ago,” she said.

Being in El Salvador during Holy Week and entering Resurrection Sunday here “has caused me to think very differently about the images I’d seen painted or carved on church walls throughout my childhood,” she said in an interview with Catholic News Service. Today, she sees what they mean as they pertain to situations unfolding before her eyes.

Just as Holy Trinity-Georgetown is part of her spiritual community, so is Maria Madre de los Pobres, and the worries of the parishioners there are her worries, too, she said. While she has seen a lot of suffering, she also has learned that the parish doesn’t allow other members of the community to bear his or her burdens alone. Maria Madre de los Pobres is a place, she said, “where the entire community reaches out to help carry the collective cross. It may be poor financially, but not socially.

“What I receive is a powerful sense of connection and community, in spite of my nascent (Spanish) language skills. When I later encounter someone with whom I walked and prayed, we smile and nod at each other. We are now one,” she said.

And that’s where, in the midst of all suffering, she has discovered the great lesson of Christianity : “There is hope of change, of resurrection,” she said.