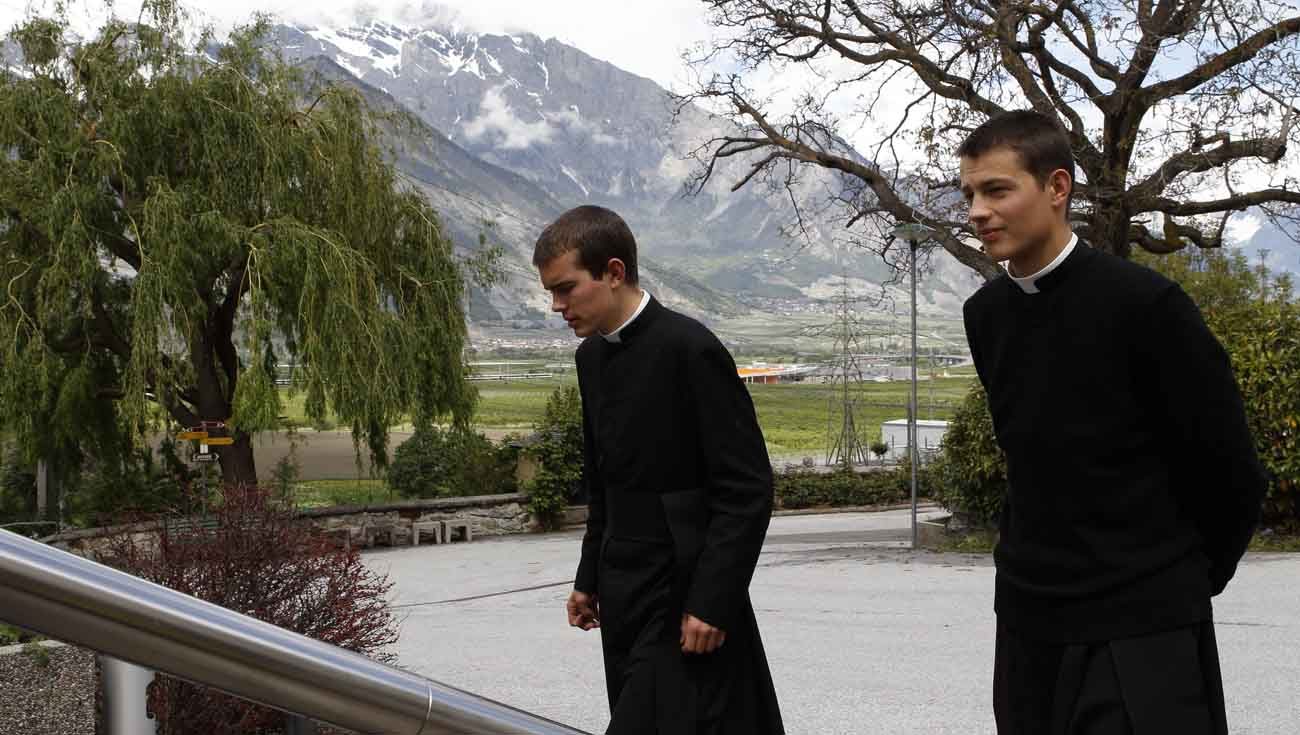 Seminarians walk on the grounds of the Society of St. Pius X seminary in Econe, Switzerland, in this May 9, 2012, file photo. Continuing initiatives aimed at a reconciliation with the Priestly Society of St. Pius X, Pope Francis has made it possible for bishops to ensure the validity of marriages celebrated in the traditionalist communities. (CNS photo/Paul Haring)

VATICAN CITY (CNS) — Continuing initiatives aimed at a reconciliation with the Society of St. Pius X, Pope Francis has made it possible for bishops to ensure the validity of marriages celebrated in the traditionalist communities.

A letter published by the Vatican April 4 said the pope will allow Catholic bishops to appoint priests to assist at SSPX marriages and formally receive the consent of the couples. The nuptial Mass then would be celebrated by the SSPX priest.

In addition, Pope Francis gave bishops the option of granting an SSPX priest the necessary faculties to officiate validly over the marriage rite “if there are no priests in the diocese” available to do so.

The provisions are meant to ensure the validity of the sacrament and “allay any concerns on the part of the faithful,” said the letter published by the Pontifical Commission “Ecclesia Dei,” which is responsible for the Vatican’s ongoing talks with the Society of St. Pius X.

The commission is led by German Cardinal Gerhard Muller, prefect of the Congregation for the Doctrine of the Faith, who signed the letter March 27.

For decades, the Vatican and leaders of the traditionalist society, founded by Archbishop Marcel Lefebvre, have been seeking a way to fully reintegrate the members of the society back into the life of the Catholic Church.

During the Year of Mercy, Pope Francis made special provisions to recognize as valid the absolution offered by SSPX priests through the sacrament of confession. After the Holy Year ended, the pope extended that provision “lest anyone ever be deprived of the sacramental sign of reconciliation through the church’s pardon.”

Pope Francis met in April 2016 with Bishop Bernard Fellay, superior general of the society. The meeting seemed to signal progress in reconciling the group with the church.

“Despite the objective persistence of the canonical irregularity in which, for the time being, the Society of St. Pius X finds itself,” the commission said in its new letter, the provisions approved by the pope on marriages should alleviate “any uneasiness of conscience on the part of the faithful regarding the validity of the sacrament of marriage.”

The commission also said it relied on the cooperation of the church’s bishops to ensure that “the process toward full institutional regularization may be facilitated” between the church and the traditionalist society.

In a statement released the same day, the society said it was grateful to the pope for his “pastoral solicitude” so that “all the faithful who want to marry in the presence of a priest of the Society of St. Pius X can do so without any worries about the validity of the sacrament.”

“The priests of the Society of St. Pius X will strive faithfully, as they have done since their ordination, to prepare future spouses for marriage according to the unchangeable doctrine of Christ about the unity and indissolubility of this union before receiving the parties’ consent in the traditional rite of the holy church,” the society said.

Vatican talks with the society began under St. John Paul II and continued throughout the papacy of now-retired Pope Benedict XVI.

St. John Paul had excommunicated Bishop Fellay and other leaders of the society in 1988 when they were ordained without papal permission by Archbishop Lefebvre, who died in 1991. Pope Benedict lifted the excommunications in 2009, opening the way for more regular talks.

The talks have focused particularly on the teaching of the Second Vatican Council and especially its documents on religious liberty, ecumenism, liturgy and relations with other religions.

NEXT: More must be done to combat child trafficking, Vatican official says