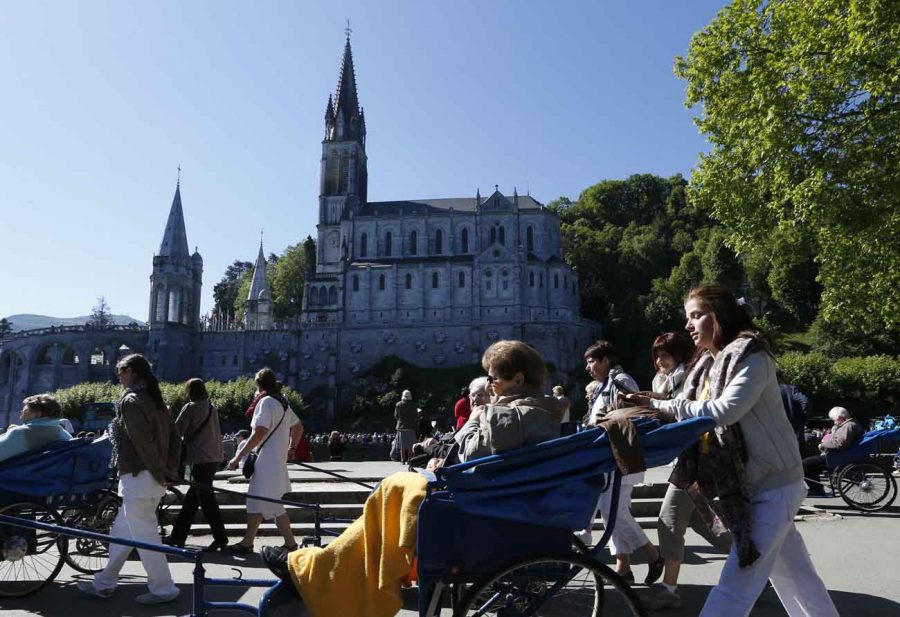 Caregivers push pilgrims in wheelchairs in 2014 at the Shrine of Our Lady of Lourdes in France. (CNS photo/Paul Haring)

VATICAN CITY (CNS) — Highlighting Catholic shrines’ potential to strengthen the faith of Catholics and draw people to Christianity, Pope Francis transferred responsibility for coordinating the activity of shrines to the Pontifical Council for Promoting New Evangelization.

“Despite the crisis of faith impacting the modern world, these places still are perceived as sacred spaces where pilgrims go to find moments of rest, silence and contemplation in the midst of a life that is often frenetic,” Pope Francis said in a document published April 1.

Issued “motu proprio,” or on his own authority, the document moves responsibility for Catholic shrines from the Congregation for Clergy to the council for new evangelization.

While in most cases, religious orders or dioceses run Catholic shrines, the Vatican still has responsibility for providing some regulation and, especially, encouragement of their pastoral activities.

The papal document specifies the pontifical council now will be responsible for: approving the designation of international shrines; studying and promoting the evangelizing activity of shrines; organizing and supporting national and international meetings to promote common pastoral initiatives; promoting specialized training of shrine workers; and ensuring that pilgrims are offered the spiritual support they need to grow from their pilgrimage.

“Here they experience in a profound way the closeness of God, the tenderness of the Virgin Mary and the company of the saints,” the pope wrote. “It is an experience of true spirituality that cannot be undervalued without demeaning the action of the Holy Spirit and the life of grace.”

Many shrines, he said, have been so popular for so long that they are part of the life and identity of families, communities and even nations.

In addition, Pope Francis said, Catholic shrines are known as places that “throw open their doors to the sick, persons with disabilities and, above all, to the poor, the marginalized, to refugees and migrants.”

PREVIOUS: Scars of past wounds give strength for the future, pope says

NEXT: Vatican releases itinerary for papal trip to Egypt