Scars of past wounds give strength for the future, pope says 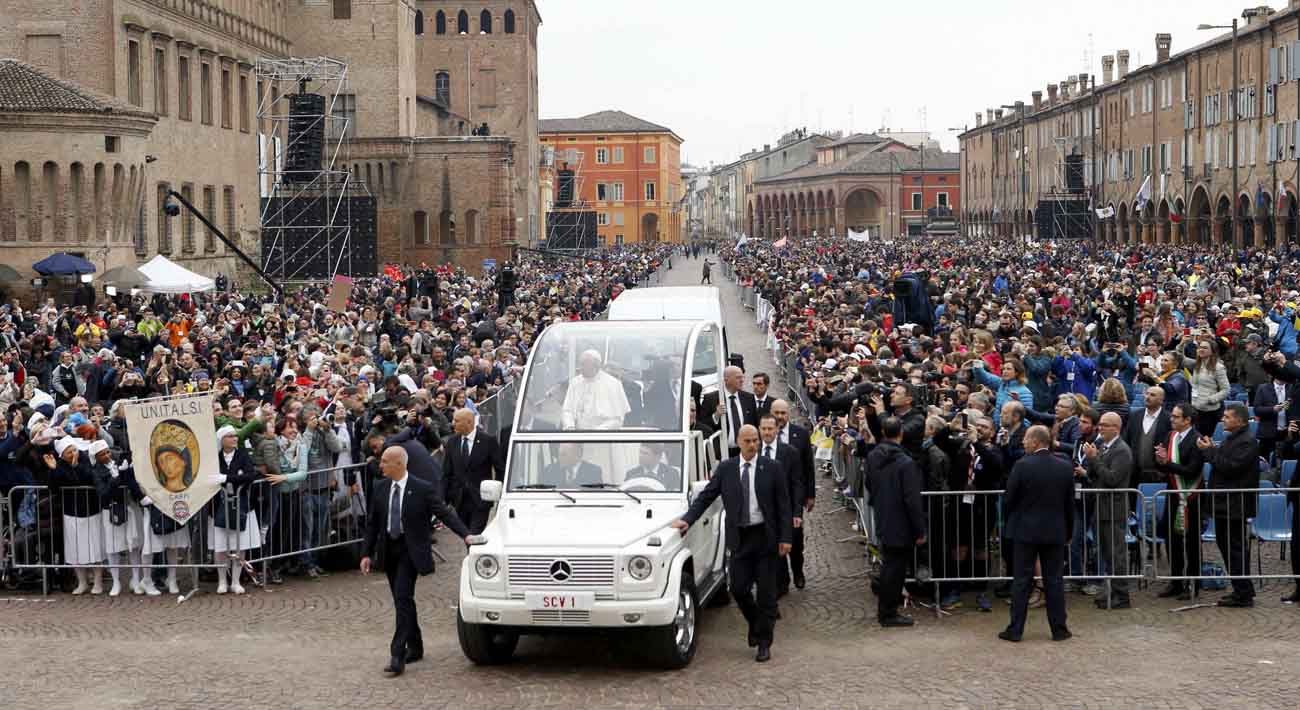 ROME (CNS) — While the wounds of past trials have healed, the scars that remain will serve as a reminder of strength and courage for future generations, Pope Francis told survivors of an earthquake.

Visiting Carpi and Mirandola April 2, nearly five years after a 5.8-quake rocked the northern Italian region of Emilia-Romagna, the pope said his visit was a sign of “closeness and encouragement” as the people continue to rebuild their homes and their lives.

“Looking at these scars, you will have the strength to grow and to make your children grow in that dignity, in that strength, in that spirit of hope, in that courage that you had in the moment you received those wounds,” he said.

The pope spoke to the survivors, who were gathered in the small square outside the Mirandola cathedral, which is still covered in scaffolding and where broken stones are still piled on the ground.

Before addressing the people, he laid a bouquet of yellow and white flowers on the cathedral’s main altar, closing his eyes in prayer then lifting his hand in blessing.

Pope Francis told the people of Mirandola that he wanted to remember the victims, their families and all those “who continue to live in precarious situations.”

“May the Lord let each one of you feel his support,” the pope said. “I wanted to leave on the altar of the cathedral a bouquet of flowers in memory of those who died in the earthquake.”

The pope’s visit to the region began earlier in the day when he arrived by helicopter in the neighboring town of Carpi, which also was devastated by the 2012 earthquake.

Thousands of people, many who had been gathered since dawn, packed the central square as the pope, riding in his popemobile, waved to the excited well-wishers.

Celebrating Mass in the square, the pope said the Sunday Gospel story of Jesus raising Lazarus from the dead was a reminder of the “God of life, who conquers death.”

The pope noted that even Jesus, who prays and weeps at the tomb, shares in the sufferings of those who mourn when “everything seems finished.”

“This is the heart of God: far from evil, yet close to those who suffer. He doesn’t make evil magically disappear but shares in the suffering, he makes it his own and transforms it.”

However, the pope continued, Jesus does not let himself be led by the sadness of his friend’s death nor allow himself to “be captured by the emotional, resigned environment surrounding him.” Instead, he prays with confidence to God.

“Thus, in the mystery of suffering — before which thought and progress crash like flies on a window — Jesus offers us the example of how to act,” he said. “He does not escape the suffering that pertains to this life, instead he doesn’t let himself be imprisoned by pessimism.”

Christians, he added, are called to decide in their own lives which side they want to be on.

Departing from his prepared remarks, Pope Francis encouraged the people of Carpi to not fall into the temptation of remaining alone, disheartened and in mourning like those who gave up hope after Lazarus’ death.

“This is the atmosphere of the tomb,” the pope said. “The Lord wants to open the path of life, that of the encounter with him, of trusting in him, of the resurrection of the heart, the path of ‘Get up! Get up! Come forth!’ This is what the Lord asks of us and he is close to us so we can do it.”

NEXT: Pope asks council for evangelization to oversee Catholic shrines