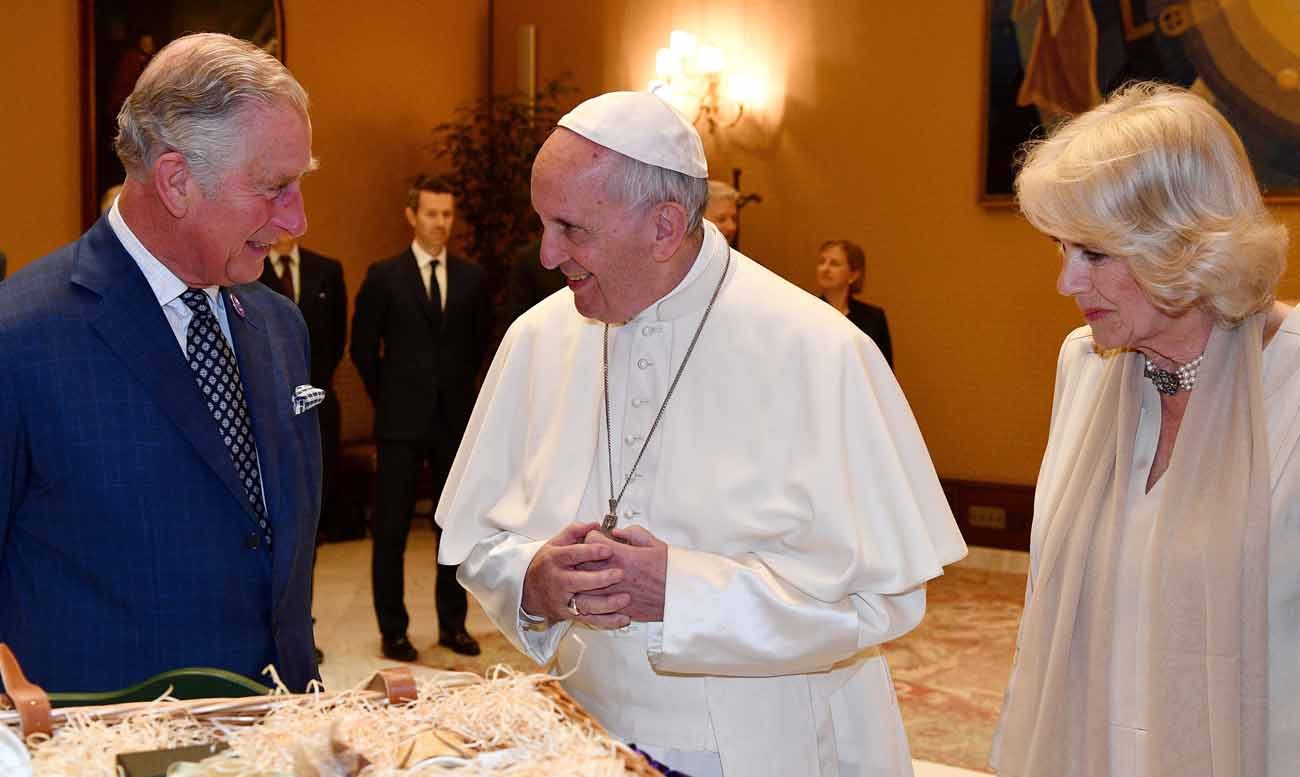 Pope Francis talks with Britain's Prince Charles and his wife, Camilla, Duchess of Cornwall, during a private audience April 4 at the Vatican. (CNS photo/Vincenzo Pinto, pool via Reuters)

VATICAN CITY (CNS)  — Britain’s Prince Charles and his wife Camilla, the duchess of Cornwall, met April 4 with Pope Francis at the Vatican.

The pope and the British royals spoke privately for 27 minutes. The Vatican did not issue a statement about the topics covered in the private conversation.

Following their private meeting, Prince Charles introduced the 15 members of a delegation accompanying him. Among them was Arthur Edwards, a Catholic who has served as the official photographer of the royal household.

“He is an important man. He has followed us for 40 years,” the prince told Pope Francis.

After the presentation, Prince Charles confessed to the pope that it was “difficult to know what to give your Holiness.”

He presented the pope with a gift basket full of produce from the Royal Gardens at Highgrove, their private residence.

“It may come in handy. Somebody else might like it. It’s all homemade things I produce,” Prince Charles told the pope.

For his part, Pope Francis presented Prince Charles with a bronze sculpture of an olive branch in a white box and told him that it was “a symbol of peace.”

“Wherever you go, may you be a man of peace,” he told the prince.

Pope Francis also gave the royal couple hardbound copies of two apostolic exhortations, “Amoris Laetitia” (“The Joy of Love”) and “Evangelii Gaudium” (“The Joy of the Gospel”). He also gave them a copy of “Laudato Si’, on Care for Our Common Home,” his 2015 encyclical on the environment.

“These are works of mine,” Pope Francis said, to which the prince jokingly replied: “Are they in English?”

“You are very generous. A great treat,” Prince Charles said.

After meeting the pope, the royal couple met with Cardinal Pietro Parolin, Vatican secretary of state. According to the British embassy to the Holy See, “The environment was a theme of the visit, and His Royal Highness joined a round-table discussion with senior Holy See officials on the subject.”

Before meeting the pope, the prince and duchess were given a private tour of the Vatican Secret Archives, where they were welcomed by Archbishop Jean-Louis Brugues, archivist and librarian of the Vatican Library.

The royal couple were shown original rare documents relating to the once-complicated history between the Catholic Church and Britain.

Among the documents they were shown was the last letter written by Mary, Queen of Scots before her execution in 1587 for treason.

They were also shown a letter written in 1555 by Queen Mary I and King Philip II regarding the restoration of the Catholic Church in England.

PREVIOUS: Peruvian court: Indigenous communities must be consulted before drilling

NEXT: Pope horrified by ‘unacceptable massacre’ in Syria