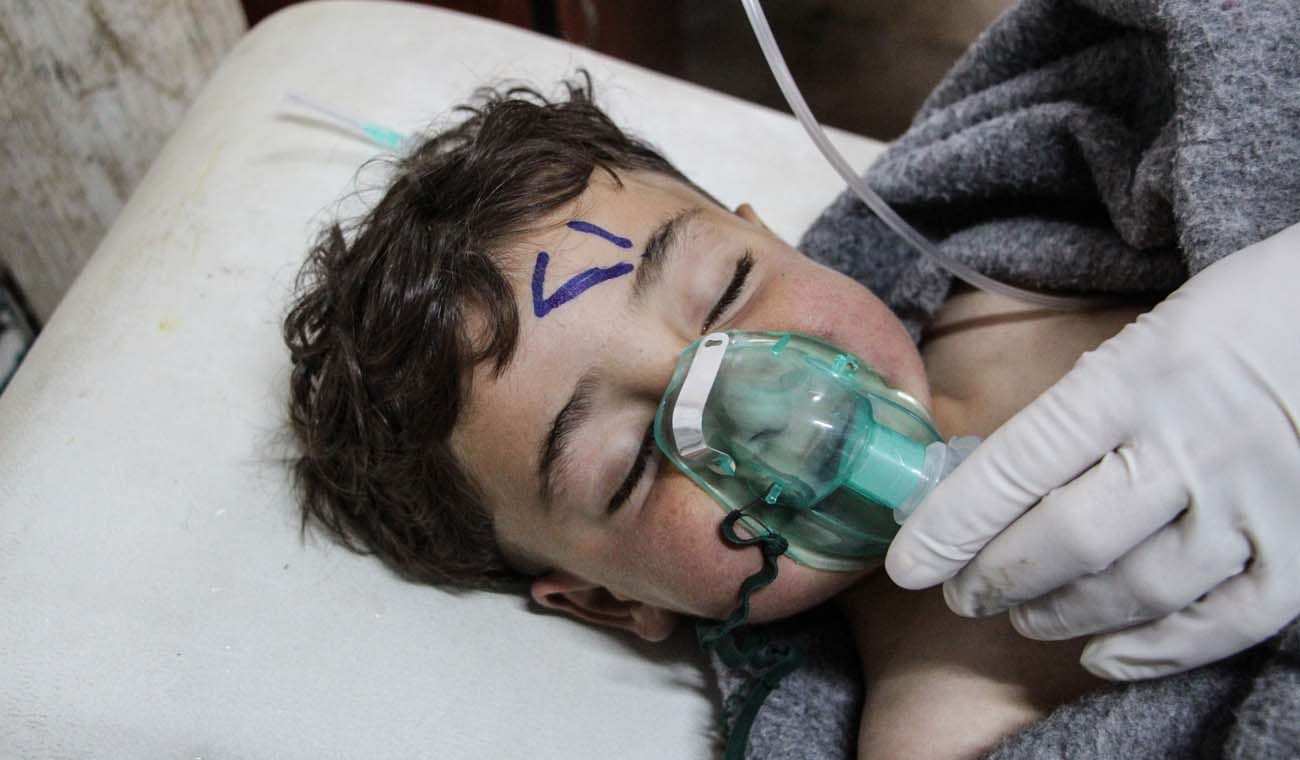 A child receives treatment inside a field hospital in Idlib, Syria, after an April 4 chemical attack. Pope Francis strongly condemned the attack, which left more than 70 people, including at least 10 children, dead. (CNS photo/EPA)

“We are horrified by the latest events in Syria. I strongly deplore the unacceptable massacre that took place yesterday in the Idlib province, where dozens of civilians, including many children, were killed,” the pope said April 5 before concluding his weekly general audience in St. Peter’s Square.

Images of dead men, women and children lying on the streets provoked international outrage following the attack April 4 in a rebel-held area.

Western leaders have accused Syrian President Bashar Assad and the country’s military of perpetrating the attack, based on reports that warplanes dropped chemical bombs in the early morning.

According to The New York Times, the Syrian military denied attacking the town and said the attack was caused by insurgents who blame the Syrian government for similar attacks “every time they fail to achieve the goals of their sponsors.”

Pope Francis encouraged those helping with relief efforts in Idlib province, and he appealed to world leaders to put an end to the violence.

“I appeal to the conscience of those who have political responsibility at the local and international level, so that this tragedy may come to an end and relief may come to that beloved population who for too long have been devastated by war,” the pope said.

The attack occurred the same day representatives from more than 70 countries were gathering in Brussels for an April 4-5 conference on resolving the humanitarian crisis in Syria and to discuss ways to support a peaceful resolution to the conflict.

Archbishop Paul Gallagher, Vatican secretary for relations with states, was among the representatives and addressed the conference April 5.

The Holy See, he said, “remains deeply concerned about the tremendous human suffering, affecting millions of innocent children and other civilians who remain deprived of essential humanitarian aid, medical facilities and education.”

He called for humanitarian laws to “be fully respected,” especially “with regard to the protection of civilian populations” and the “conditions and treatment of prisoners.”

“The Holy See invites all parties to the Syrian conflict to spare no effort to end the seemingly endless cycle of violence, to restore that sense of solidarity that is the basis of social cohesion and peaceful coexistence,” Archbishop Gallagher said.

The pope also said his thoughts and prayers were with the victims of the bombing of a metro station in St. Petersburg, Russia, that killed 14 people and left 50 wounded.

Chaos erupted April 3 when a bomb was detonated in a subway train. Police said the bomber was Akbarzhon Dzhalilov, a Russian citizen born in Kyrgyzstan. Following the attack, security forces said a second bomb was found at a nearby station, but it had failed to explode.

“As I entrust to God’s mercy those who have tragically died, I express my spiritual closeness to their families and to all who suffer because of this tragic event,” Pope Francis said.

In an April 5, statement, the U.S. Conference of Catholic Bishops in Washington backed the pope’s condemnation and his call to the international community and said they were praying for “and end to the carnage in Syria.” They said the chemical attack “shocks the soul.”

“The many innocent lives targeted by these terrible tools of war cry out for humanity’s protection,” it said. “In this season of Lent when Christians draw near to the suffering of Christ, let us match the horrific indifference shown for innocent life with a fervent prayer for love to break through the evil.”

The statement was issued by the USCCB’s president and vice president, Cardinal Daniel N. DiNardo of Galveston-Houston and Archbishop Jose H. Gomez of Los Angeles.

They said they would pray that God will help those who suffer and bring them consolation.

NEXT: South African bishops: Zuma resignation would not solve all problems