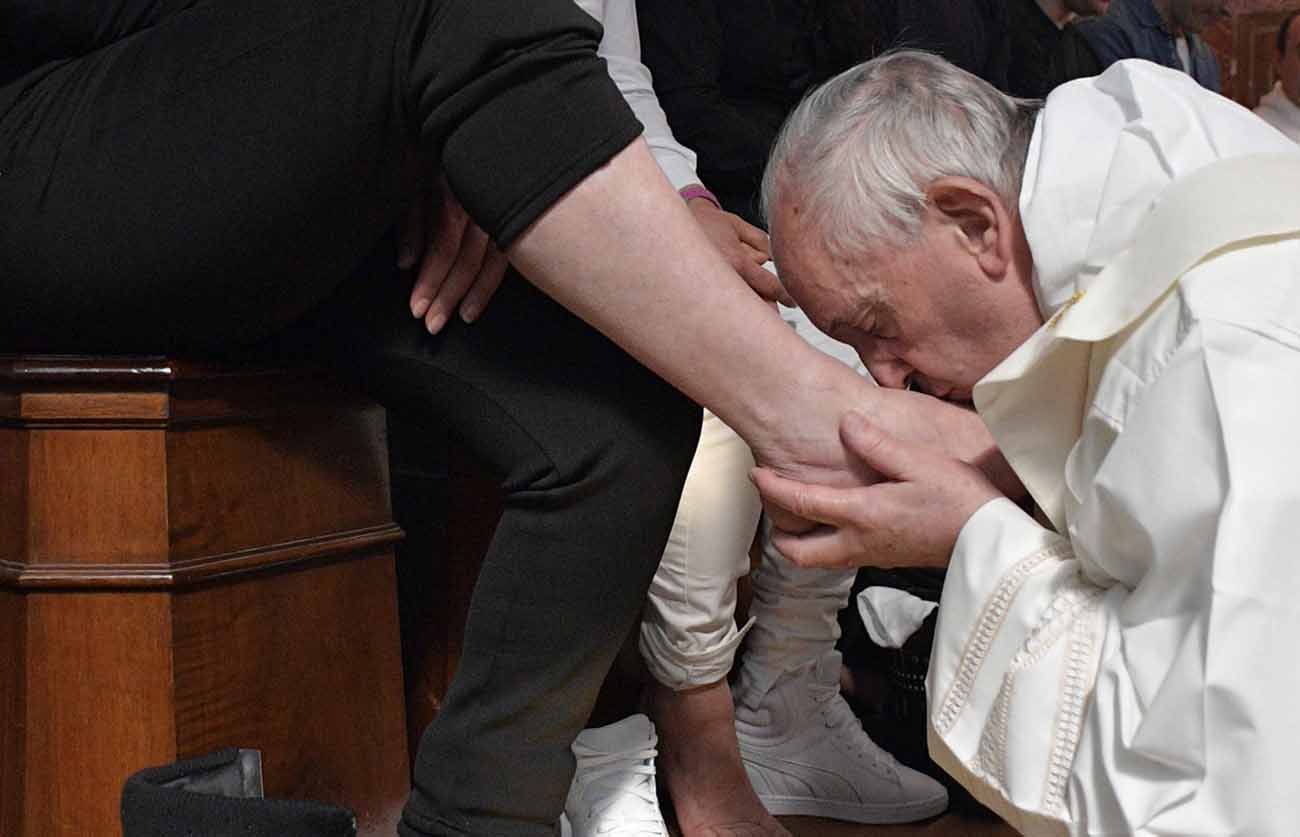 Pope Francis kisses the foot of an inmate April 13 at Paliano prison outside of Rome as he celebrates Holy Thursday Mass of the Lord's Supper. The pontiff washed the feet of 12 inmates at the maximum security prison. (CNS photo/L'Osservatore Romano)

VATICAN CITY (CNS) — In a gesture of service toward marginalized people, Pope Francis washed the feet of 12 inmates, including three women and a man who is converting from Islam to Catholicism.

Although in Jesus’ time, washing the feet of one’s guests was performed by slaves, Jesus “reverses” this role, the pope said during the Holy Thursday Mass of the Lord’s Supper April 13 at a prison 45 miles from Rome.

“He came into this world to serve, to serve us. He came to make himself a slave for us, to give his life for us and to love us to the end,” he said.

Pope Francis made his way by car to a penitentiary in Paliano, which houses 70 men and women who testified as a witness for the state against associates or accomplices.

To protect the safety and security of the prisoners, only a live audio feed of the pope’s homily was provided by Vatican Radio as well as selected photographs released by the Vatican.

The Vatican said April 13 that among the 12 inmates who participated in the foot washing ceremony, “two are sentenced to life imprisonment and all the others should finish their sentences between 2019 and 2073.”

In his brief homily, which he delivered off-the-cuff, the pope said that upon his arrival, people greeted him saying, “‘Here comes the pope, the head of the church.'”

“Jesus is the head of the church. The pope is merely the image of Jesus, and I want to do the same as he did. In this ceremony, the pastor washes the feet of the faithful. (The role) reverses: The one who seems to be the greatest must do the work of a slave,” he said.

This gesture, he continued, is meant to “sow love among us” and that the faithful, even those in prison, can imitate Christ in the same manner.

“I ask that if you can perform a help or a service for your companion here in prison, do it. This is love, this is like washing the feet. It means being the servant of the other,” the pope said.

Recalling another Gospel reading, in which Jesus tells his disciples that the greatest among them must be at the service of others, Pope Francis said Christ put his words into action by washing his disciple’s feet and “it is what Jesus does with us.”

“For this reason, during this ceremony, let us think about Jesus. This isn’t a folkloric ceremony. It is a gesture to remind us of what Jesus gave us. After this, he took bread and gave us his body; he took wine and gave us his blood. This is the love of God,” the pope said.

Vatican Radio reported that several other inmates took an active role in the liturgy, including four who served as altar servers. Other inmates prepared homemade gifts for the pope, among them were two dessert cakes, a handcrafted wooden cross and fresh vegetables grown in the prison garden.

The evening Mass was the second of two Holy Thursday liturgies for Pope Francis. The first was a morning chrism Mass in St. Peter’s Basilica.

NEXT: Papal preacher: Victory belongs to one who triumphs over self, not others