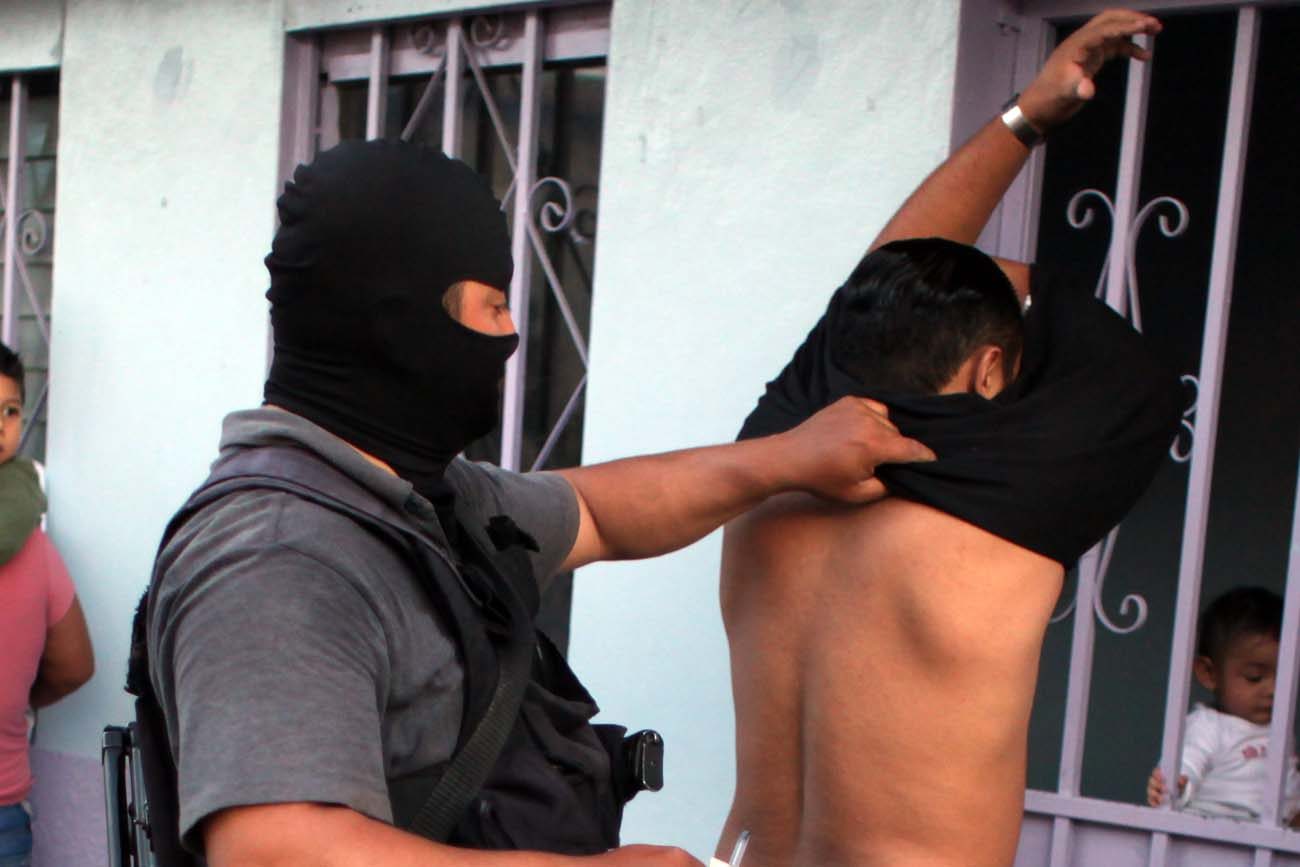 A member of the Honduran police arrests a man during anti-gang operations in 2012 in an area controlled by gang members in Tegucigalpa, Honduras. (CNS photo/Gustavo Amador, EPA)

MEXICO CITY (CNS) — An international organization that works to prevent conflict urged the United States not to institute mass deportations or harsh anti-migration measures without checking on the conditions in the Central American countries to which it is returning migrants.

The report from the International Crisis Group also called for officials to reconsider crackdowns on criminal gangs in countries in the so-called Northern Triangle of Central America — Guatemala, Honduras and El Salvador — which currently register some of the world’s highest homicide rates and alarming numbers of internally displaced people.

“At a time when the prospect of mass deportations from the U.S. risks exacerbating social anomie and criminal activity in the Northern Triangle, establishing ways to defuse extreme violence and minimize the harms of (gang) activity … is essential,” said the report, released April 6.

“Repressive and militarized policies toward the gangs have proved not merely ineffective, but counterproductive,” said the report, titled, “Mafia of the Poor: Gang Violence and Extortion in Central America.”

“Assorted crackdowns have not taken account of the deep social roots of the gangs — which provide identity, purpose and status for youths who are unaccommodated in their home societies — (and) failed to recognize the counterproductive effects of security measures that have given gangs prisons in which to organize and confirmation of their identity as social outcasts.”

Catholics working on development and social justice issues in the region concurred with the report, saying the deportees find few opportunities and social stigmatization, while heavy-handed attempts at attacking the gangs — popular approaches with populations being preyed upon and forced to pay criminal extortion — have led to human rights violations and accusations of extrajudicial killings.

“It taxes the capacity of the government to reintegrate these people back into society and be able to protect the citizens, and there’s a big stigma to being deported (because) everyone assumes if you were deported, there must be some reason” such as a criminality, said Rick Jones, Catholic Relief Services’ deputy regional director for global solidarity and justice for Latin America and the Caribbean.

“Deportees usually end up unemployed, and some of them join the ranks of criminal organization,” added Jesuit Father Ismael Moreno, director of Radio Progreso in Honduras. “What deportations do is worsen the situation.”

Immigration has marked the region for decades, though Father Moreno says a flood of migrants left Honduras before the Jan. 20 U.S. presidential inauguration. The numbers then dropped, although he sees signs of migration picking up again because “the situation of violence and internal displacement is worsening.”

Since 2014, Central America has also experienced an increase in the number of unaccompanied minors and entire families fleeing the region. Observers say this is because gangs forcibly recruit adolescents into their ranks and demand that young females become gangster girlfriends.

Father Moreno said he and those working with him have focused on training and accompanying young people and mothers. He was critical of officials attacking the gangs.

Attempts at controlling the gangs have proven difficult. The two big gangs in El Salvador, the Mara Salvatrucha (MS-13) and Barrio 18, agreed to a truce in 2011. The government did not recognize the existence of the truce, but the agreement did reduce the murder rate.

The truce unraveled in 2014 and the murder rate soared again, topping 80 per 100,000 residents. Gang activities also disrupt daily life in other ways, according to the report; for instance, passing from one gang-controlled area to another often is impossible.

The gangs also depend on extortion for income, especially in El Salvador. Thugs murder those who do not pay extortion fees and prompt those without money to become internally displaced. Despite their extensive extortion activities, the gangs are not believed to be wealthy.

Some priests have worked with gangs and even achieved local truces, while bishops in both El Salvador and Honduras have been involved in higher-level investigations.

The Crisis Group said there was a role for the Catholic and evangelical churches due to the “relatively high levels of trust that religious organizations enjoy” and the fact “they are often called on to search for spaces for dialogue with gangs.”

PREVIOUS: Conference aims to give young people a voice ahead of synod, WYD