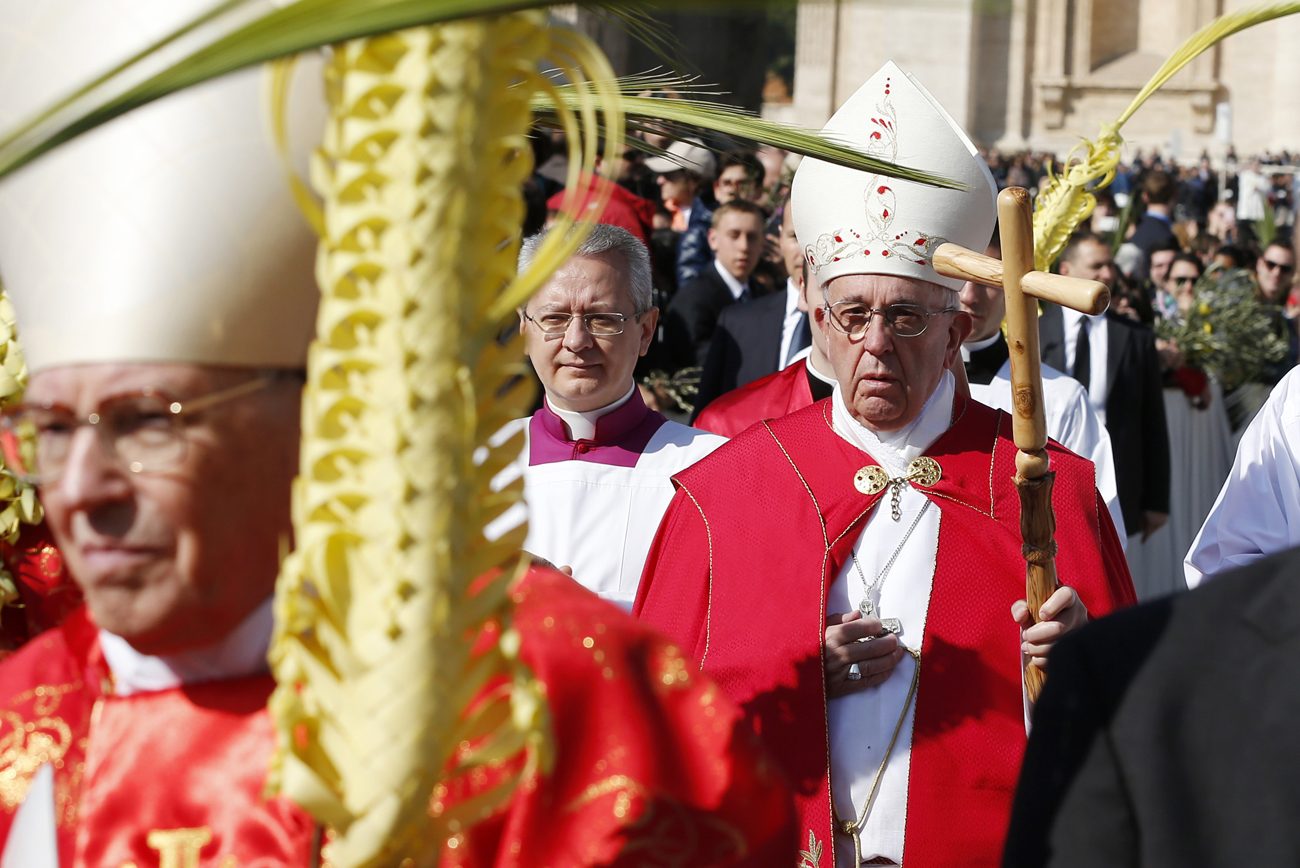 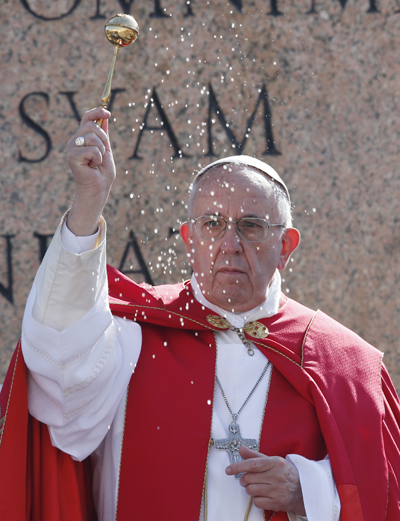 Pope Francis blesses with holy water as he leads a service at the obelisk at the beginning of Palm Sunday Mass in St. Peter’s Square at the Vatican March 20. (CNS photo/Paul Haring) See POPE-PALM-SUNDAY March 20, 2016.

VATICAN CITY (CNS) — Jesus does not ask that people only contemplate his image, but that they also recognize and love him concretely in all people who suffer like he did, Pope Francis said.

Jesus is “present in our many brothers and sisters who today endure sufferings like his own — they suffer from slave labor, from family tragedies, from diseases. They suffer from wars and terrorism, from interests that are armed and ready to strike,” the pope said April 9 as he celebrated the Palm Sunday Mass of the Lord’s Passion.

In his noon Angelus address, the pope also decried recent terrorist attacks in Sweden and Egypt, calling on “those who sow terror, violence and death,” including arms’ manufacturers and dealers, to change their ways.

In his prayers for those affected by the attacks, the pope also expressed his deepest condolences to “my dear brother, His Holiness Pope Tawadros, the Coptic church and the entire beloved Egyptian nation,” which the pope was scheduled to visit April 28-29.

At least 15 people were killed and dozens more injured April 9 in an Orthodox church north of Cairo as Coptic Christians gathered for Palm Sunday Mass; the attack in Sweden occurred two days earlier when a truck ran through a crowd outside a busy department store in central Stockholm, killing four and injuring 15 others.

The pope also prayed for all people affected by war, which he called, a “disgrace of humanity.”

Tens of thousands of people carrying palms and olive branches joined the pope during a solemn procession in St. Peter’s Square under a bright, warm sun for the beginning of Holy Week.

The pope, cardinal and bishops were dressed in red vestments, the color of the Passion, and carried large “palmurelli,” bleached and intricately woven and braided palm branches. Hundreds of young people led the procession into St. Peter’s Square and later, youths from Poland handed the World Youth Day cross to young representatives from Panama, where the next international gathering will be held in January in 2019.

In his homily, the pope said that the day’s celebration was “bittersweet.”

“It is joyful and sorrowful at the same time” because the Mass celebrates the Lord’s entrance into Jerusalem as the people and disciples acclaim him as king, and yet, the Gospel gives the account of his passion and death on the cross.

Jesus accepts the hosannas coming from of the crowd, but he “knows full well that they will soon be followed by the cry, ‘Crucify him!'” the pope said.

Jesus “does not ask us to contemplate him only in pictures and photographs or in the videos that circulate on the internet,” but to recognize that he is present in those who suffer today, including “women and men who are cheated, violated in their dignity, discarded.”

“Jesus is in them, in each of them, and, with marred features and broken voice, he asks to be looked in the eye, to be acknowledged, to be loved,” the pope said.

We have no other Lord but him: Jesus, the humble King of justice, mercy and peace.

Jesus enters the city of Jerusalem as the true Messiah, who is a servant of God and humanity, the pope said. He is not a dreamer peddling illusions, a “new age” prophet or con man; he takes on the sins and sufferings of humanity with his passion.

Jesus never promised honor and success would come to those who follow him, rather, the path to final victory requires picking up the cross and carrying it every day, Pope Francis said.

“Let us ask for the grace to follow Jesus faithfully, not in words but in deeds. Let us also ask for the patience to carry our own cross, not to refuse it or set it aside, but rather, in looking to him, to take it up and to carry it daily,” he said. 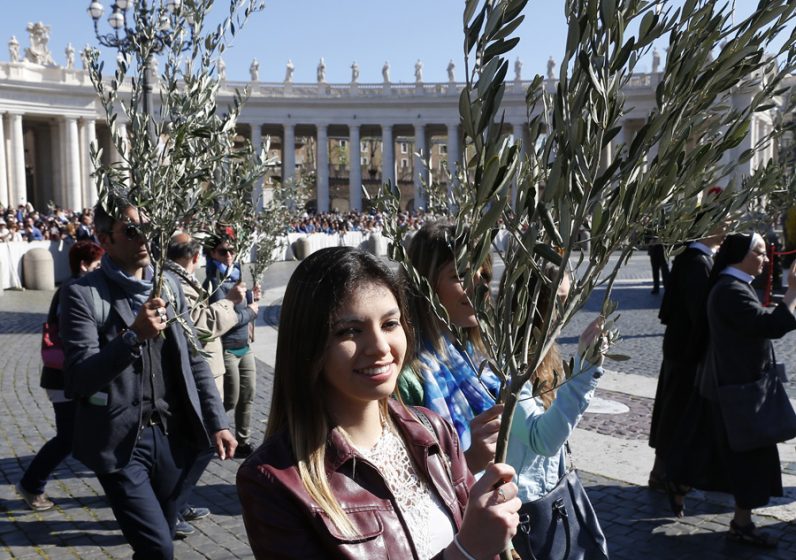 NEXT: Pope: Scientists must defend creation from distorted use of biotech