Risen Christ calls all to follow him on path to life, pope says 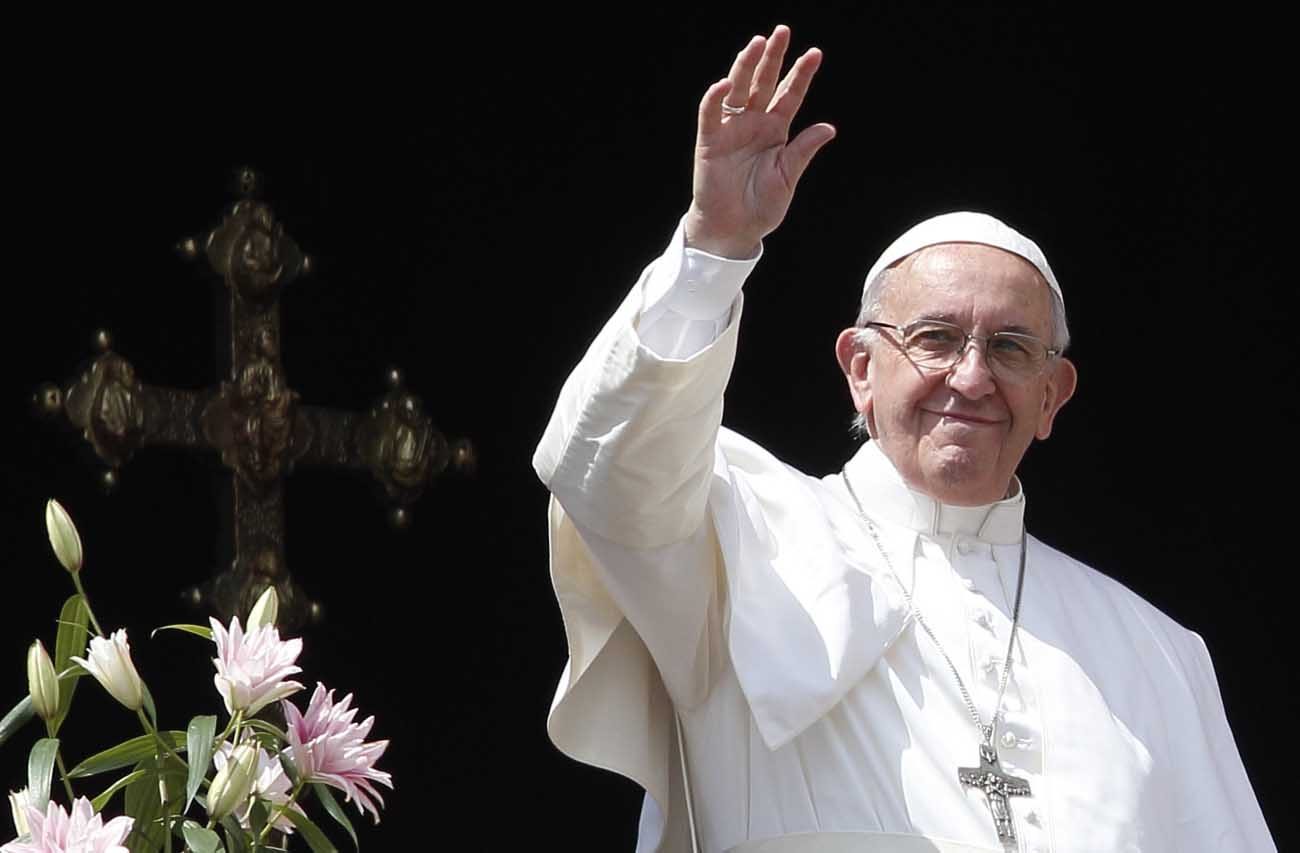 Pope Francis greets the crowd after delivering his Easter message and blessing "urbi et orbi" (to the city and the world) from the central balcony of St. Peter's Basilica at the Vatican April 16. (CNS photo/Paul Haring)

VATICAN CITY (CNS) — Jesus is the risen shepherd who takes upon his shoulders “our brothers and sisters crushed by evil in all its varied forms,” Pope Francis said before giving his solemn Easter blessing.

With tens of thousands of people gathered in St. Peter’s Square April 16, the pope called on Christians to be instruments of Christ’s outreach to refugees and migrants, victims of war and exploitation, famine and loneliness.

For the 30th year in a row, Dutch farmers and florists blanketed the area around the altar with grass and 35,000 flowers and plants: lilies, roses, tulips, hyacinths, daffodils, birch and linden.

Preaching without a prepared text, Pope Francis began — as he did the night before at the Easter Vigil — imagining the disciples desolate because “the one they loved so much was executed. He died.”

While they are huddling in fear, the angel tells them, “He is risen.” And, the pope said, the church continues to proclaim that message always and everywhere, including to those whose lives are truly, unfairly difficult.

“It is the mystery of the cornerstone that was discarded, but has become the foundation of our existence,” he said. And those who follow Jesus, “we pebbles,” find meaning even in the midst of suffering because of sure hope in the resurrection.

Pope Francis suggested everyone find a quiet place on Easter to reflect on their problems and the problems of the world and then tell God, “I don’t know how this will end, but I know Christ has risen.”

Almost immediately after the homily, a brief but intense rain began to fall on the crowd, leading people to scramble to find umbrellas, jackets or plastic bags to keep themselves dry.

After celebrating the morning Easter Mass, Pope Francis gave his blessing “urbi et orbi,” to the city of Rome and the world. 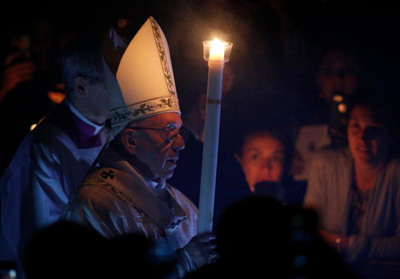 Pope Francis carries a candle as he arrives to celebrate the Easter Vigil in St. Peter’s Basilica at the Vatican April 15. (CNS photo/Paul Haring)

Before reciting the blessing, he told the crowd that “in every age the risen shepherd tirelessly seeks us, his brothers and sisters, wandering in the deserts of this world. With the marks of the passion — the wounds of his merciful love — he draws us to follow him on his way, the way of life.”

Christ seeks out all those in need, he said. “He comes to meet them through our brothers and sisters who treat them with respect and kindness and help them to hear his voice, an unforgettable voice, a voice calling them back to friendship with God.”

Pope Francis mentioned a long list of those for whom the Lord gives special attention, including victims of human trafficking, abused children, victims of terrorism and people forced to flee their homes because of war, famine and poverty.

“In the complex and often dramatic situations of today’s world, may the risen Lord guide the steps of all those who work for justice and peace,” Pope Francis said. “May he grant the leaders of nations the courage they need to prevent the spread of conflicts and to put a halt to the arms trade.”

The pope also offered special prayers for peace in Syria, South Sudan, Somalia, Congo and Ukraine, and for a peaceful resolution of political tensions in Latin America.

The pope’s celebration of Easter got underway the night before in a packed St. Peter’s Basilica.

The basilica was gently illuminated only by candlelight and the low light emanating from cellphones capturing the solemn procession.

The bells of St. Peter’s pealed in the night, the sound echoing through nearby Roman streets, announcing the joy of the Resurrection.

One by one, the catechumens approached the pope who asked them if they wished to receive baptism. After responding, “Yes, I do,” they lowered their heads as the pope poured water over their foreheads.

Among them was Ali Acacius Damavandy from the United States who smiled brightly as the baptismal waters streamed down his head. 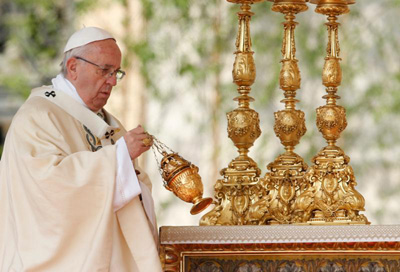 In his homily, reflecting on the Easter account from the Gospel of St. Matthew, the pope recalled the women who went “with uncertain and weary steps” to Christ’s tomb.

The pope said the faces of those women, full of sorrow and despair, reflect the faces of mothers, grandmothers, children and young people who carry the “burden of injustice and brutality.”

The poor and the exploited, the lonely and the abandoned, and “immigrants deprived of country, house and family” suffer the heartbreak reflected on the faces of the women at the tomb who have seen “human dignity crucified,” he said.

However, the pope added, in the silence of death, Jesus’ heartbeat resounds and his resurrection comes as a gift and as “a transforming force” to a humanity broken by greed and war.

“In the Resurrection, Christ rolled back the stone of the tomb, but he wants also to break down all the walls that keep us locked in our sterile pessimism, in our carefully constructed ivory towers that isolate us from life, in our compulsive need for security and in boundless ambition that can make us compromise the dignity of others,” he said.

Pope Francis called on Christians to follow the example of the woman who, upon learning of Christ’s victory over death, ran to the city and proclaimed the good news in those places “where death seems the only way out.”

Presiding over the Stations of the Cross Good Friday, April 14, at Rome’s Colosseum, Pope Francis offered a prayer expressing both shame for the sins of humanity and hope in God’s mercy.

A crowd of about 20,000 people joined the pope at the Rome landmark. They had passed through two security checks and were watched over by a heavy police presence given recent terrorist attacks in Europe.

At the end of the service, Pope Francis recited a prayer to Jesus that he had composed. “Oh Christ, our only savior, we turn to you again this year with eyes lowered in shame and with hearts full of hope.”

The shame comes from all the “devastation, destruction and shipwrecks that have become normal in our lives,” he said, hours after some 2,000 migrants were rescued in the Mediterranean Sea. The shame comes from wars, discrimination and the failure to denounce injustice.

Turning to the sexual abuse crisis, Pope Francis expressed “shame for all the times we bishops, priests, consecrated men and women have scandalized and injured your body, the church.”

But the pope also prayed that Christians would be filled with the hope that comes from knowing that “you do not treat us according to our merits, but only according to the abundance of your mercy.”

Christian hope, he said, means trusting that Jesus’ cross can “transform our hardened hearts into hearts of flesh capable of dreaming, forgiving and loving.”