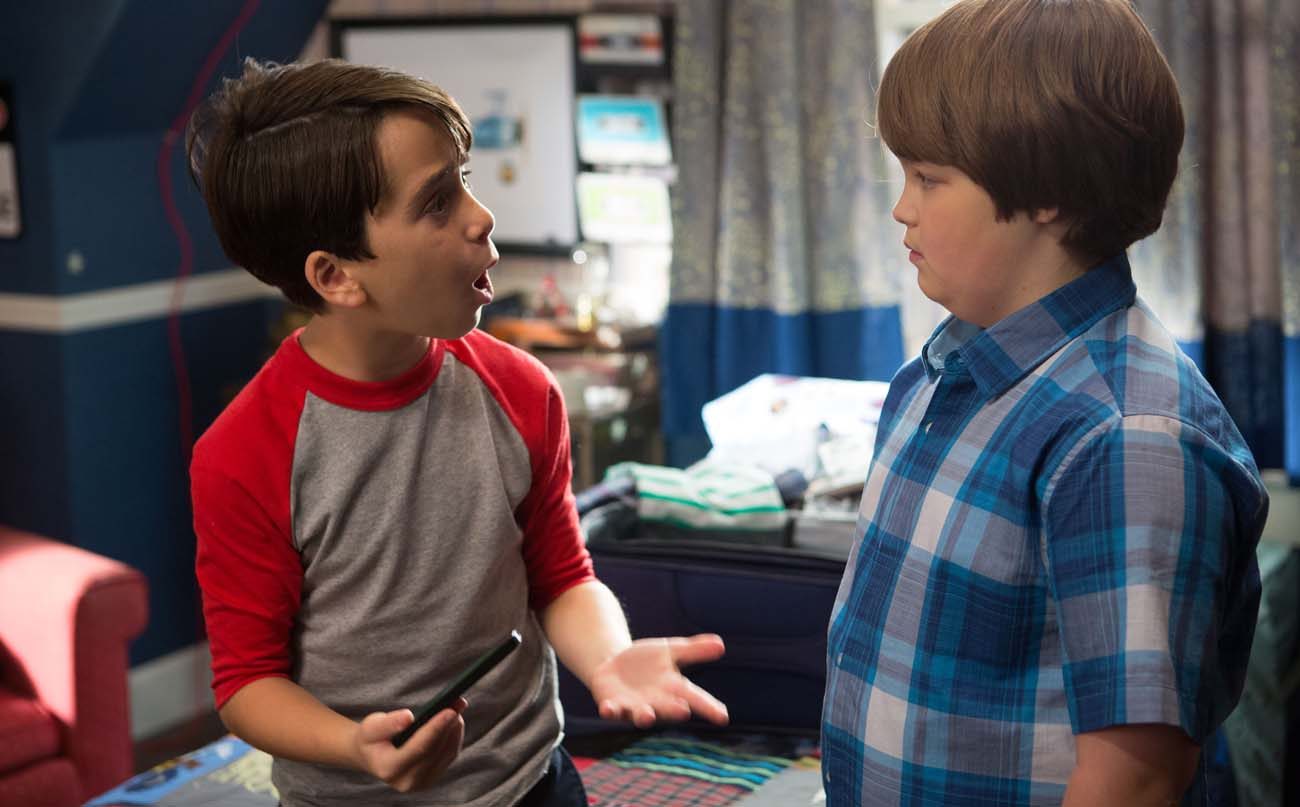 Jason Drucker and Owen Asztalos star in a scene from the movie "Diary of a Wimpy Kid: The Long Haul." (CNS photo/Fox)

NEW YORK (CNS) — For better or worse, bathroom-themed gags have long been a staple of kids’ movies. But the family road comedy “Diary of a Wimpy Kid: The Long Haul” (Fox) carries this trend to excess.

Together with a noticeable lack of creative drive, writer-director David Bowers’ reliance on scatological humor blights his adaptation of the eponymous novel by Jeff Kinney, the fourth installment of a screen franchise that began in 2010.

As his family sets off on a cross-country journey to attend his great-grandmother’s 90th birthday celebration — a trip his mother Susan (Alicia Silverstone) hopes will foster family unity — mild-mannered middle schooler Greg Heffley (Jason Drucker) worries that being confined together in a car for hours on end will have the opposite effect on his often-quarreling clan.

He also rails against Mom’s ban on the use of electronics during the trip, a prohibition his overworked father, Frank (Tom Everett Scott), likewise finds it difficult to obey. Still, Greg has a plan to turn this unwelcome outing to his own advantage.

Recently shamed by an embarrassing video that went viral, Greg plots with his older brother, Rodrick (Charlie Wright), to retrieve his reputation by being taped in the company of online celebrity Mac Digby (Joshua Hoover). Digby is scheduled to appear at Player’s Expo, a gaming convention being held not too far off the Heffleys’ planned route.

The event that has made Greg notorious is typical of the excretion-focused humor that’s too often front and center as the film ambles along to little purpose. As the result of a misadventure too involved to recount in detail, Greg winds up with a dirty diaper stuck to one hand. His frantic — and unsuccessful — efforts to fling it away are captured by a host of cellphone cameras, and infamy awaits.

On the trip, though, Greg suffers other indignities of a similar nature. He winds up concealed behind a shower curtain while the person from whom he’s hiding relieves himself inches away. Later, on the road again and with no exit for miles, Greg is forced to use an empty bottle to answer nature’s call.

It doesn’t take the acumen of a Sherlock Holmes to detect that depending on such incidents for laughs is a symptom either of laziness or an impoverished imagination. Whatever their source, the prominence and frequency of these scenes prevents endorsement of this sometimes queasy sequel for viewers of all ages.

The film contains much distasteful potty humor and brief adult wordplay. The Catholic News Service classification is A-II — adults and adolescents. The Motion Picture Association of America rating is PG — parental guidance suggested. Some material may not be suitable for children.

PREVIOUS: Teen-love drama ‘Everything, Everything’ puts cynics to the test

NEXT: Movies with Catholic themes to hit cinemas, video