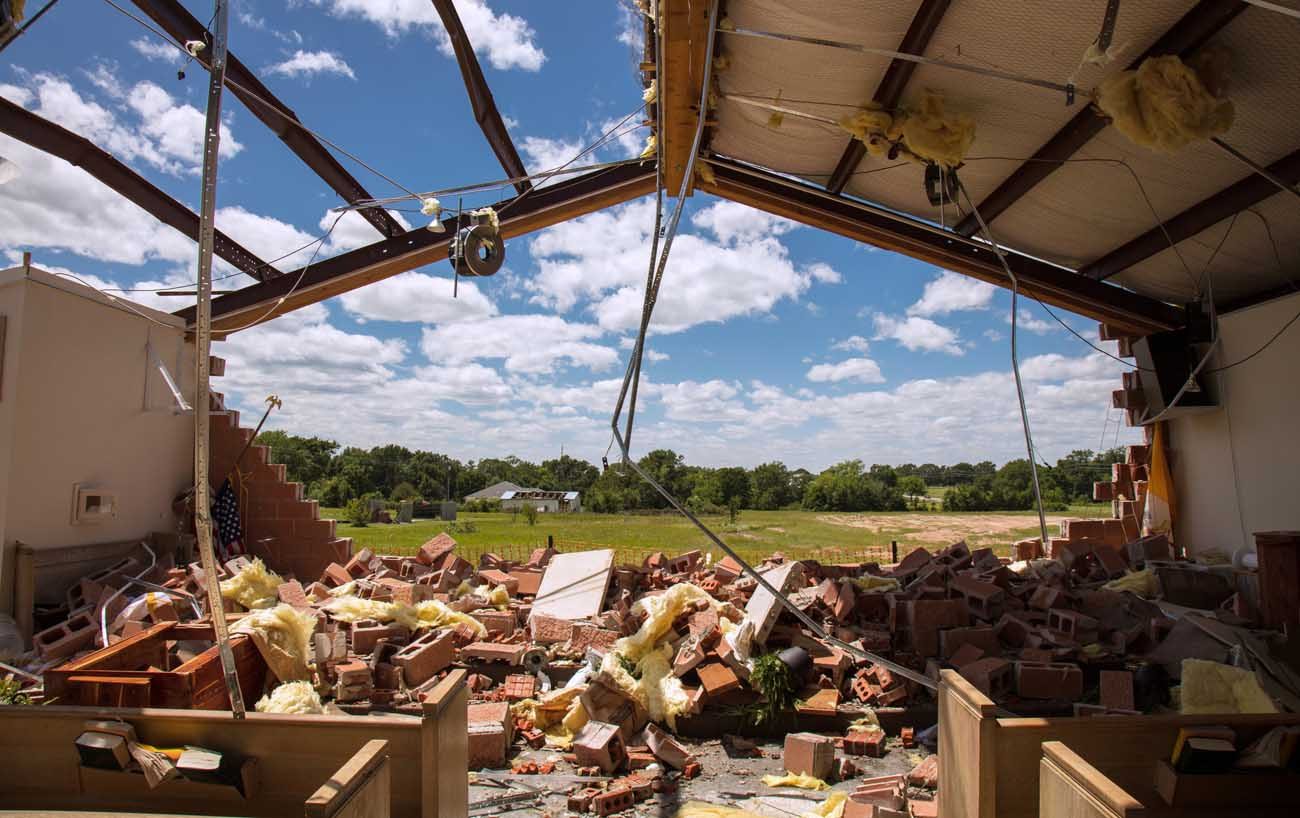 St. John the Evangelist church in Emory, Texas, is seen April 30 after a tornado hit the area a day earlier. (CNS photo/courtesy Diocese of Tyler)

WASHINGTON (CNS) — In the insurance world, extreme weather events such as tornadoes are often referred to as “acts of God.”

But in the small Texas town of Emory, about 50 miles northwest of Tyler and 70 miles east of Dallas, some 45 people are considering it an act of God that they survived a twister that took out all of their church except for the hallway in which they were huddled.

The providential event took place the evening of April 29, as severe storms tore through Texas, Oklahoma and Arkansas on a northeasterly path that killed at least 13 people in three states.

The youth ministry at St. John the Evangelist Parish in Emory was hosting a dinner honoring the parish’s graduating high school seniors in conjunction with the parish’s Knights of Columbus council and its ladies’ guild.

“I got a phone call from Maggie (Conder), the volunteer in the office,” youth minister Monica Hughes told Catholic News Service May 1. “I almost didn’t answer, because I didn’t want to interrupt the speaker.” But Hughes knew Conder was monitoring the paths of storms in Texas, and “she wouldn’t have interrupted unless it was important,” Hughes said.

It was: “The tornado that hit Canton was heading straight for us,” she recalled.

Hughes said she and her husband both tried to pull up weather radar on their cellphones without luck. Then Hughes made the decision to tell teens and adults to move to the church hallway. The decision, she said, was based on “this instinct when you learn when you’re a child — you go to the hallway and you cover your head.”

There was some grumbling by the teens but everyone complied, Hughes remembers. “It’s the innermost place of the building,” she said of the hallway. “Everything else had exterior walls. On my way, I went around and I locked all the exterior doors to the building — just one little extra step to keep the wind from ripping them open.”

Thirty seconds after Hughes got into the hallway after completing her rounds, ” my husband said, ‘It’s hitting.’ He saw the roof of the sanctuary rip off — one piece. We saw the doors fly open into the sanctuary space. My husband grabbed the door and he held on with everything (he had) to the other,” Hughes said. “What I saw was people covering each other, comforting each other — parents covering small children, teenagers huddling together. We began to pray.”

The parish’s deacon, Marcelino Espinosa, was at one end of the hallway as he began a rosary; Hughes was at the other end beginning the Divine Mercy chaplet.

“We didn’t have this horrible fear, we felt protected,” she told CNS. “The whole time that we were in there and we were holding those doors, I felt that Jesus was over us … whispering to me, ‘It’s OK, I’ve got you.'”

She added, “I described it … as a Passover. The tornado came, and it his us with full force and it was over.”

After a quick assessment of the damage, the group decided to stay put as another storm was bearing down on them. Firefighters coming after the second storm advised them to evacuate as the combination of a downed power line and a gas leak threatened catastrophe, Hughes said.

Once outside, they saw the church was destroyed — except for the hallway. The pastor’s house nearby was spared, save for a damaged backyard fence. One irony in the storm: Hughes’ 22-year-old daughter, who was at the dinner as well, had been evacuated in March from Peru where flooding and landslides wiped out destroyed entire communities. “And now we had to pluck her out of a tornado,” Hughes said.

“It’s a miracle,” declared the pastor, Father Victor Hernandez. “People could experience the hands of God protecting them. He was not at the dinner, having been summoned to celebrate Mass in Pittsburgh, Texas, about 75 minutes from Emory. On his drive back, “I heard the sirens go off and I wanted to be with my community,” he said.

Parishioners celebrated Mass as usual April 30, but outside on parish property. “We’re going to come out of this stronger than ever,” Father Hernandez said. “We are going to have a new building and church, which was not in our plans. We are going to move bigger and faster.”

PREVIOUS: Mary’s message of hope to be celebrated in small Wisconsin town