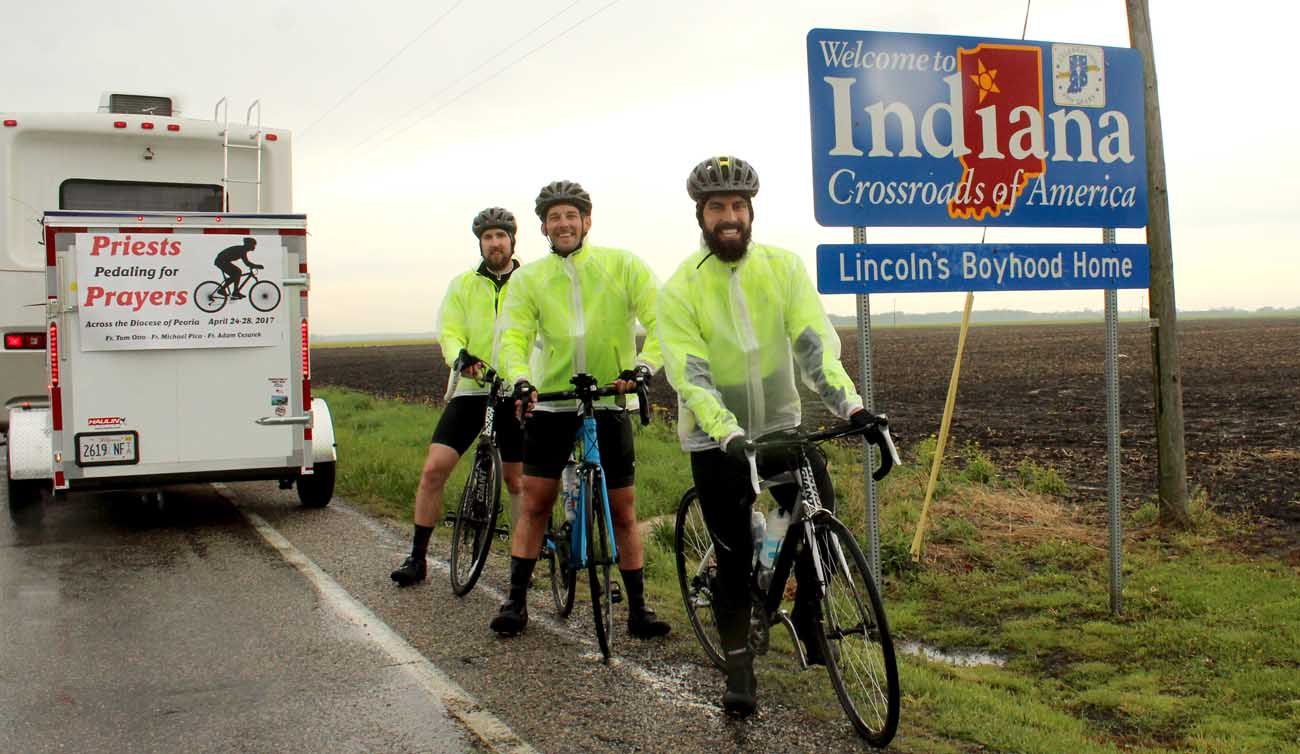 After riding a little more than 340 miles over five days, Father Michael Pica, Father Adam Cesarek and Father Tom Otto stand just inside Indiana April 28, bringing "Priests Pedaling for Prayers" to a close. Behind them is one of the support vehicles that accompanied them on the journey to raise prayers for and awareness of vocations. (CNS photo/Jennifer Willems, The Catholic Post)

PEORIA, Ill. (CNS) — After riding bicycles a little more than 340 miles over five days, three young priests of the Diocese of Peoria sailed across the Indiana state line April 28, bringing Priests Pedaling for Prayers to a close.

“It does seem a little surreal,” Father Tom Otto said at journey’s end. “Things like this seem insurmountable when you begin, but maybe like life, you focus on the short-term goals. … That makes it doable. Take one little bit at a time and before you know it, you’ve done something pretty incredible.”

The effort to raise prayers for vocations began April 24 when Father Otto, Father Michael Pica and Father Adam Cesarek dipped their rear tires in the Mississippi River, which marks the border between Iowa and Illinois. They were sent forth with the blessing of students at Our Lady of Grace Catholic Academy in East Moline, who lined both sides of the street outside the school to cheer them on.

Along the way, they stopped to talk with students and parishioners at 15 schools and churches about the need for vocations to the priesthood and consecrated life, as well as good, holy marriages “from which all vocations come.”

They also celebrated Mass, took part in Holy Hours for vocations, stopped to pray at the Bishops’ Mausoleum in St. Mary’s Cemetery in West Peoria, and visited with people at potluck gatherings, dinners and receptions arranged by the vocation apostolates or Knights of Columbus councils in each area.

At most stops, they received pledge cards from children and adults with promises of prayer, sacrifice and good deeds to support them on the ride and ask God for an increase in vocations.

“What’s been really neat to see is the goodness of the people of our diocese. That’s been, for me, absolutely the most powerful part,” said Father Cesarek, who is parochial vicar at four faith communities in central Illinois.

“The overwhelming support we had from each and every place we went, the joy that each place had and the excitement that they maintained … really invigorated me and gave me an incredible hope for our diocese,” he said.

He said the trio were inspired by the good, holy people they encountered, including the priests of the Diocese of Peoria, many of whom were on hand for their visits and offered them hospitality for the night.

“There were things that surprised us along the way,” said Father Otto, parochial vicar at two parishes and a chaplain for students at Monmouth College. “The fact that every school and every parish did something different for us was a nice surprise.”

The pedaling priests found a drumline waiting for them at Costa Catholic Academy in Galesburg, a parade with students from St. Mary School in Pontiac and St. Paul School in Odell walking or biking with them, and signs, streamers and tunnels of enthusiastic students at others. When they arrived at Schlarman Academy in Danville, near the Indiana border, students were holding a large “Finish Line” banner they had signed.

Father Pica, parochial vicar at three parishes in McLean and DeWitt counties, credits the welcome at the schools with “pumping us up and getting us ready to go, giving us momentum to do the ride.”

That was especially important on April 26, when the priests did their “century” ride — 100 miles in one day. In all, they were on the road for 20 hours and 45 minutes, averaging about 17 miles an hour.

Each priest had a tough day, but it wasn’t the same day so they were able to support and encourage whoever was struggling. They prayed the rosary and Divine Mercy chaplet and caught up with each other when the wind was at their backs and they were able to ride side by side.

“There’s moments of quiet, which is all right, too,” Father Cesarek said. “There are moments of suffering out there. I was kind of keeping in mind particular people, some of the kids in our school who are suffering with cancer, offering that suffering for them.”

They emphasized that they aren’t the only priests willing to suffer and go the extra mile for their people.

“There are so many priests out there who will do anything and everything and they don’t get recognition for it,” Father Pica said. In fact, these men prefer to remain behind the scenes.

Would they do it again?

“Ask us in a couple months,” Father Otto said, laughing.

“Without question,” Father Cesarek said, “we would all be open to it again, if the Lord wills it.”

NEXT: The better educated, the less religious? Not so for Christians