Afghan women left everything behind — except their sewing skills 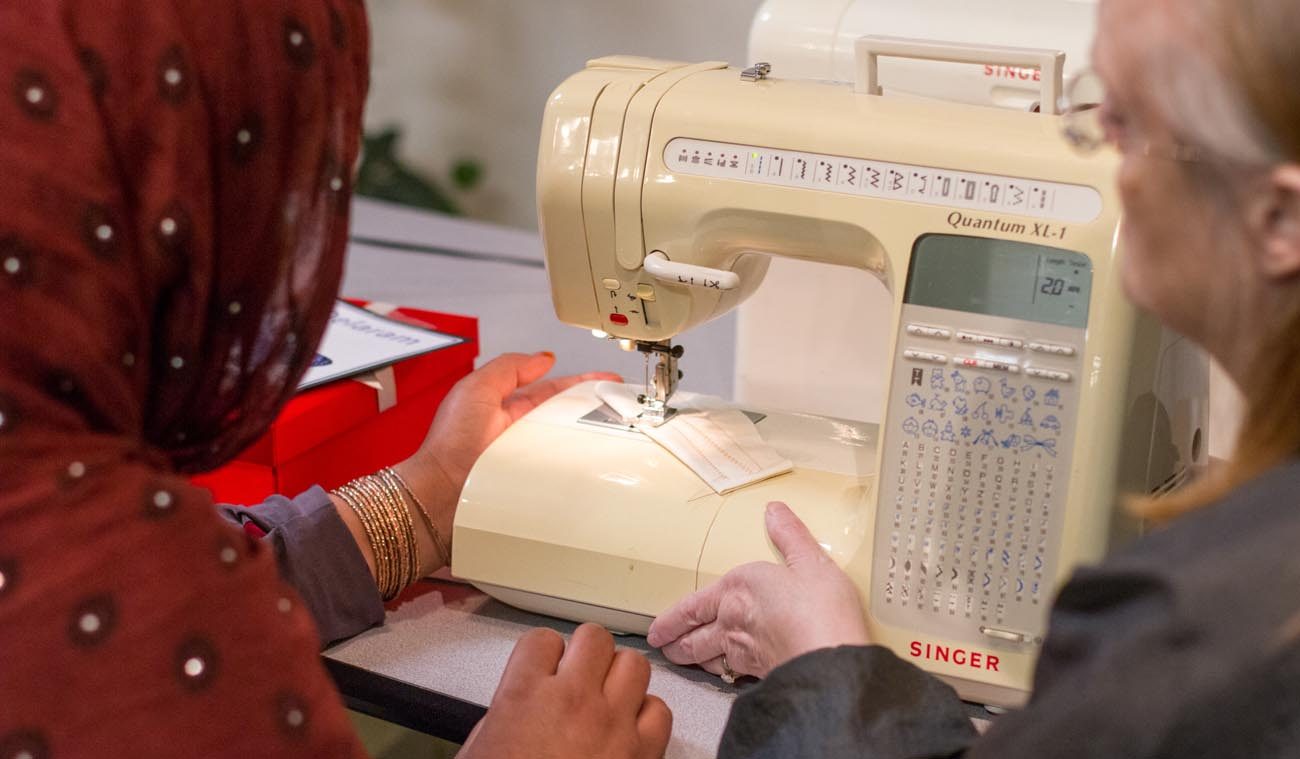 A volunteer works with a refugee from Afghanistan to help her learn how to use a sewing machine during an April 27 training session at a Catholic Charities program in Fredericksburg, Va. (CNS photo/Ashleigh Buyers, Catholic Herald)

FREDERICKSBURG, Va. (CNS) — Before Mahnaz left Afghanistan with her husband and four sons, she carefully packed beautiful black, red and white curtains in the few suitcases she could bring along to her new life in a country 7,000 miles away.

They would be something familiar from her native land once she was surrounded by strangers whose language she didn’t speak. But to her dismay, the curtains didn’t fit the windows of her new home in Fredericksburg when she arrived a few months ago.

“The curtains were special to me because I thought I might not be able to find them here,” Mahnaz said, speaking in Dari through an interpreter.

In Afghanistan, she could have easily made new curtains on one of the three sewing machines she owned — one a gift from her mother, another from her mother-in-law, and the third a wedding present. So when Mahnaz heard that the Catholic Charities Office of Migration and Refugee Services in the Diocese of Arlington had distributed donated sewing machines to 14 women and one man last year, she hoped for one of her own.

At the end of April, Mahnaz and nine other women studying English at the Fredericksburg office of Catholic Charities received sewing machines. Now they can sew for themselves and sew items to sell at craft fairs.

Many of the women, whose names have been changed for security reasons, are in the United States on special immigrant visas for the families of Afghan interpreters whose lives were in danger because they served the U.S. embassy or military.

“I’ve been a sewer since I was 8 or 9,” Schwerin told the Arlington Catholic Herald, the diocesan newspaper. “My mom taught me, and I know a lot of these ladies come with a lot of creative talent.”

She hoped the machines would help the women, most of whom have never worked outside the home, supplement their income and build their self-esteem.

“I really believe in these women and I want them to feel good about the beautiful things they make,” Schwerin said.

Unlike Mahnaz, the majority of women are used to sewing by hand, not on a machine. After one basic lesson, the first group taught themselves enough to sew clothes — without patterns. The lone man in the group found a job as a tailor, while the women formed a group, Love 2 Sew, and began selling makeup bags, purses, duvet covers and quilts at farmer’s markets.

“We knew these women had these skills, but we had no idea to what extent,” said Laurel Collins, associate director of the Fredericksburg office.

The second group of women gathered April 27 for a basic lesson on the machines. It was a challenging process because some of the machines did not have manuals. Mahnaz, working with an antique black Singer machine, wound thread around a hook and then looped it around downward into a smaller loop. Fariba, a mother of seven, worked on a more modern machine that made a gentle whirring noise.

After some time spent turning knobs and pushing buttons, she took a break. She said she was planning to make “a thousand things … for myself and kids as well.” She’ll start out with pillow and mattress covers.

As for Mahnaz, “I need to make curtains for my home.”

Stachyra Lopez is social media coordinator for the Arlington Catholic Herald, newspaper of the Diocese of Arlington