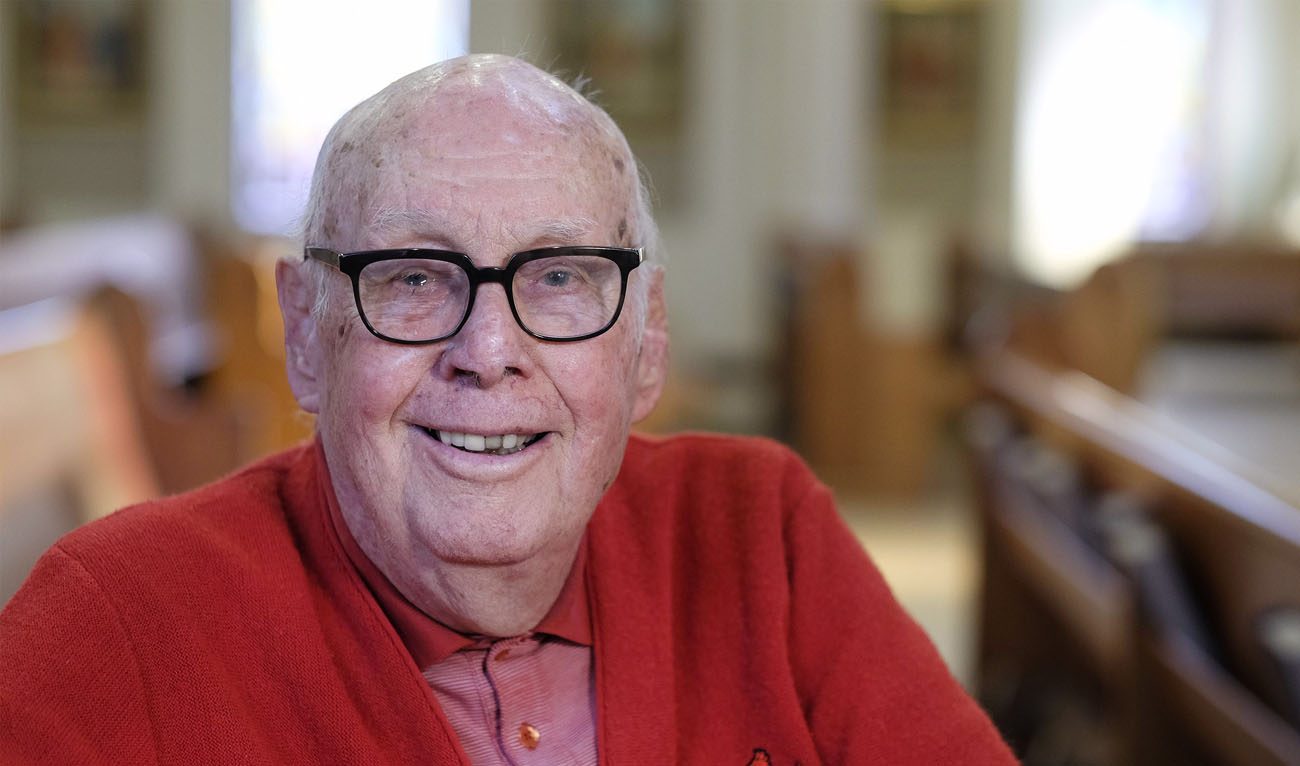 Dr. Leo Samson, 96, poses for a photo at Sacred Heart Church in Ida Grove, Iowa, May 5. In June he turns 97 and marks 91 years as an altar server. (CNS photo/Jerry L Mennenga)

The first is his 97th birthday. The second claim to fame is starting his 91st year of serving as an altar “boy.”

Samson and his wife, Peg, became daily Massgoers following his retirement in 1985. Peg died in 2013 at age 93 and her husband continued attending weekday Mass.

Samson had approached the pastor at the time, Father Gerald Fisch, in the early 1990s, when it was clear there was a scarcity of altar servers.

“I asked if he would like some help on the altar,” Samson said. “He was just tickled to death, so I asked the next pastors, Father (David) Hemann and Father (Richard) Ball if they would like my help and they said yes.”

But his tenure as an altar server began way before that. Samson recalled being invited to serve at the altar immediately following his first Communion at St. John Church in Onawa.

“Father Louis Savage took two of us second-graders and two third-graders to one side and said, ‘I’m going to show you how to be altar servers,'” he told The Catholic Globe, newspaper of the Diocese of Sioux City.

Samson went on, “I remember I wasn’t very big or very tall and in those days, you had to move the Epistle book and the Gospel book and it was a chore to reach up to the lectern and move those heavy books.”

Serving at Mass back then meant learning all the Latin, Samson noted. 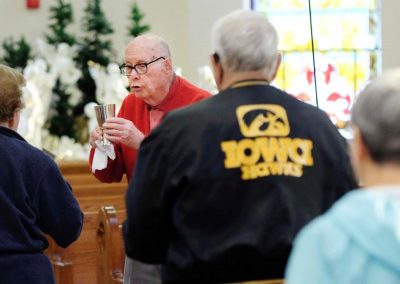 Samson continued as an altar server until he graduated from high school in 1938. He attended Creighton University in Omaha, Nebraska, graduating from dental school in 1945, and enlisting in the Navy as a dentist in World War II. Samson was stationed in California, where he met Peg, who was a Navy nurse. Peg was honorably discharged in 1946. She and Leo were married that same year in Pennsylvania.

The couple made their home in California, until Samson’s 1947 discharge from the service, then lived in West Point, Nebraska, before moving to Ida Grove in 1950. The dentist remained with the Naval Reserve until 1969.

The greatest joy Samson receives from serving at the altar is that of being helpful to the pastor.

“I also get the satisfaction of experiencing Christ in that way at Mass,” he said. “It’s hard to explain the joy you have doing this.”

Sporting a bright red sweater and khaki pants at the first Friday Mass May 5, Samson was entirely at ease in the sanctuary, be it preparing the altar or ringing the bells during the consecration. He even relaxes the pastor, Father Ball.

“He brings a sense of joy that young people just do not,” the priest said. “We teach the young servers to be solemn and reverent and that’s what they are — to the point they seem too scared to be joyful.”

“I was in the choir for about 40 years and I have lectored and cantored,” he said.

What seemed to elude him was the priesthood, Samson mused.

“Father Savage and Msgr. (Percy) Gearen tried to steer me in that direction, but I never had that call,” he said. “The stronger call was my high school coach, who told me I had good eye-hand coordination and I should be a dentist.”

PREVIOUS: Afghan women left everything behind — except their sewing skills

NEXT: Word of God, church need each other, cardinal tells Bible conference