As Trump and the pope meet, peace offerings in person and via Twitter 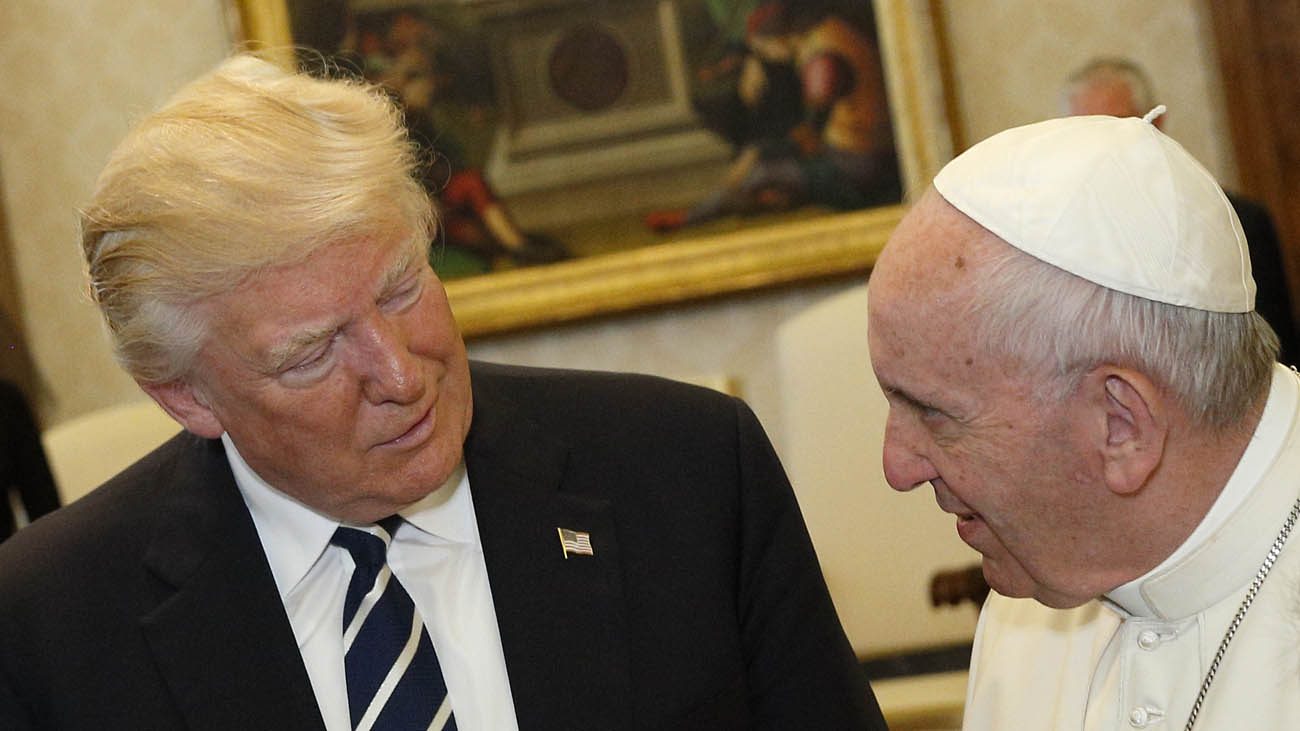 Pope Francis talks with U.S. President Donald Trump during a private audience at the Vatican May 24. (CNS photo/Paul Haring)

WASHINGTON (CNS) — Though there are few details about what was said when Pope Francis and Donald Trump talked privately May 24, much was made online about the U.S. president’s wide smile and the pope’s more serious stance as the two posed for public photos at the Vatican.

The pope showed his trademark smile when he met the president’s accompanying family members — his wife, daughter and son-in-law — after their meeting, which was described as “cordial” by the Vatican.

But away from the cameras, in the public arena of ideas about how the world should work, the two men have clearly been at odds on a long list of subjects such as immigration, the environment, how to fight poverty, using militarization instead of diplomacy, to name a few.

“We know that His Holiness and President Trump differ strongly on a number of issues, particularly treatment of migrants and the environment, and (the pope’s) expression and body language while receiving Trump conveyed seriousness and concern,” Michele Dunne of the Carnegie Endowment for International Peace in Washington told Catholic News Service. “Still, the two leaders worked hard to hold a constructive meeting and to find common ground — which they did, particularly as regards the need for peace in the Middle East and protection of Christians there.”

Signaling some openness to the pope’s thinking, Trump is said to have uttered, “I won’t forget what you said,” as he left their private session.

Cardinal Timothy M. Dolan of New York, in an interview with CNN shortly after the meeting, said he wouldn’t be surprised if the pope got some of his points across to the president.

“I mean, this is a man who has come across as the greatest prophet in protection of the poor and vulnerable and marginalized throughout the world. So, that he would speak of those values and principles, I’m sure he did,” Cardinal Dolan said about the pope during CNN’s “New Day” morning show.

The New York archbishop said the pope probably speaks about the same topics to other world leaders, but “I think he especially would to the president of the strongest, mightiest power on the face of the earth.”

“When you have these two leaders today, you got the leader of the greatest moral and spiritual authority in the world, the pope, and you got the leader of the strongest, natural, earthly power, that the two of them would work hand-in-glove, that they would have more that brings them together than divides them, that’s good for world peace,” Cardinal Dolan said. “That by the way has been pretty much been the history of American relations with the Holy See and I would have hoped that would continue today in the meeting between the president and the pope.”

But others like Massimo Faggioli, a church historian and professor of theology at Villanova University in Philadelphia, said it’s also important to look at what wasn’t officially said.

“It should not surprise that some issues were not mentioned in the Holy See statement, such as the environment,” Faggioli said in an email to CNS. “Areas of disagreement are never mentioned in this kind of official final statements.”

And disagreements are plenty between the two — and quite public. Trump, while on the campaign trail, criticized the pope after the pontiff said in 2016 that “a person who thinks only of building walls, wherever they may be, and not building bridges, isn’t Christian.” Questioning a person’s faith is “disgraceful,” Trump said in response. Trump supporters attacked the pope via Twitter by saying the Vatican had walls around it. Just days before meeting with the pope, during a May 18 news conference, Trump said “Walls work, just ask Israel.”

And the disagreements began long before the two knew they would cross paths or knew much about the other. Trump tweeted in 2013 that paying for your own hotel bill in person was not “Pope-like” after the pontiff stopped by a church-run hotel to settle the bill at the facility where he’d been staying prior to his election. But on Twitter, in the same venue Trump had previously used to lob insults at the pontiff, he tweeted after their historic meeting: “Honor of a lifetime to meet His Holiness Pope Francis. I leave the Vatican more determined than ever to pursue PEACE in our world.”

Dunne, of the Carnegie Endowment for International Peace, said that “while they are likely to differ again in the future, today’s meeting poured balm on a wounded relationship.”

NEXT: Guidebook helps delegates prepare for Convocation of Catholic Leaders