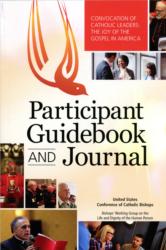 This combination guidebook and journal has been developed to help delegates prepare for the Convocation of Catholic Leaders gathering in Orlando, Fla., set for July 1-4. (CNS)

WASHINGTON (CNS) — The 3,000 people attending the upcoming Convocation of Catholic Leaders are being seen as members of diocesan teams who will return home to act on what they see and learn while discussing the church’s role in a changing social landscape.

A combination guidebook and journal has been developed to help the delegates prepare for the gathering in Orlando, Florida, set for July 1-4.

The 68-page book offers activities for the diocesan teams as they meet during the weeks leading to the gathering, allowing them to reflect and pray on Scripture and the teachings of Pope Francis, particularly his apostolic exhortation “Evangelii Gaudium” (“The Joy of the Gospel”).

“To get something done, we want people to have prepared as teams before they come in to get more out of (the convocation),” said Jonathan Reyes, executive director of the U.S. bishops’ Department of Justice, Peace and Human Development and a convocation planner. “What you get out of this is what you put into it.”

The booklet is being sent to each registered participant to the invitation-only event. It also is available online to anyone interested in learning more about the convocation at bit.ly/2rR6OTY.

Reyes told Catholic News Service that the guidebook encourages team members to plan which sessions to attend that fits with the goals of their diocese in building a church built on mercy and missionary discipleship.

“In the ideal world, it’s forming a team that brings together people from the peripheries who are not normally together. This book is what’s going to help them think as a team before they get there. It gives them some things to reflect on together,” he explained.

“We’re trying to make clear that this isn’t the kind of thing you attend passively and that bishops and leaders are meant to be integrated in a conversation of the whole church together and experience the conference not as the bishops over there, the laypeople over here. It’s actually meant to be everyone mixing together in conversation,” Reyes added.

The guidebook offers numerous Scripture citations and references to passages from the pope’s exhortation. Delegates are encouraged to read some of the passages and pray about what they mean for their particular role in the convocation and the church at home.

A separate section includes space for journal entries based on the discussion of each day of the convocation. The idea, Reyes said, is to allow participants the opportunity to reflect in the moment and then return to their writings when they return home.

“It’s spiritual preparation as well,” Reyes said of the book. “It’s deeply scriptural and there’s a lot of “Evangelii Gaudium” as well as some other key church documents from the bishops. It’s a lot of Scripture and a lot of Pope Francis.”

The convocation is meant to guide people to build the church that Pope Francis is calling people to shape, Reyes added.

“We didn’t want to create a program. This (convocation) is for people to design or think through together what mission looks like. Pope Francis says again and again, ‘Don’t do the same old things.’ You want to think creatively. So we’re not going to put together a program, but people are going to experience, hopefully, in a way that gives them a way forward, a vision for their own,” he said.

Meanwhile, more than $500,000 had been pledged to support scholarships for people attending the convocation. Reyes’ department and the Catholic Campaign for Human Development have allocated $100,000 each in financial assistance. The Black and Indian Mission Office has pledged another $300,000.

The goal of such scholarships is to allow diverse voices to be on hand in Orlando, Reyes said.

“If there’s a Francis inspiration in this, it’s let’s not just talk, (but) act,” he told CNS. “So we are pushing action, action, action through proper preparation.”

PREVIOUS: As Trump and the pope meet, peace offerings in person and via Twitter