Bishops among first signatories to pledge to end death penalty 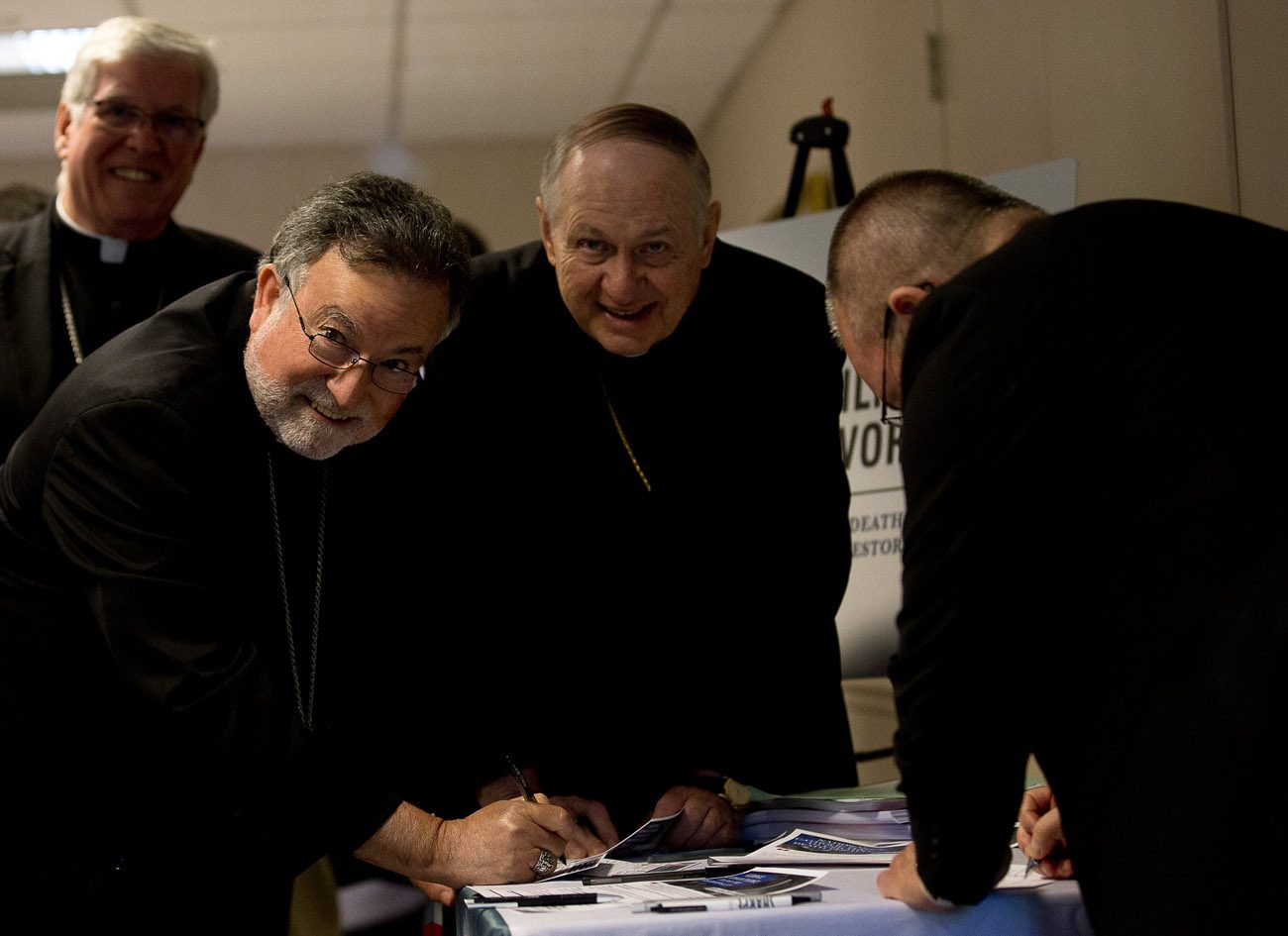 Bishop Jaime Soto of Sacramento, Calif., and Bishop Richard E. Pates of Des Moines, Iowa, pose for a photo while singing pledges to end the death penalty at the U.S. Conference of Catholic Bishops building in Washington May 9. (CNS photo/Tyler Orsburn)

WASHINGTON (CNS) — Bishops attending a meeting were among the first to sign the National Catholic Pledge to End the Death Penalty at the U.S. bishops’ headquarters building May 9.

Each person taking the pledge promises to educate, advocate and pray for an end to capital punishment.

“All Christians and people of goodwill are thus called today to fight not only for the abolition of the death penalty, whether legal or illegal, and in all its forms, but also in order to improve prison conditions, with respect for the human dignity of the people deprived of their freedom,” Pope Francis has said. This quotation kicks off the pledge.

The pledge drive is organized by the Catholic Mobilizing Network.

“The death penalty represents a failure of our society to fulfill the demands of human dignity, as evidenced by the 159 people and counting who have been exonerated due to their innocence since 1973,” the organization says on the pledge sheet following space for someone’s signature.

Quoting from the Catechism of the Catholic Church, the network added, “The death penalty is not needed to maintain public safety, punishment must ‘correspond to the concrete conditions of the common good and (be) more in conformity to the dignity of the human person.'”

After capital punishment was halted nationwide briefly in the 1970s, more than 1,400 people have been executed since it resumed 40 years ago, according to the Catholic Mobilizing Network. “The prolonged nature of the death penalty process can perpetuate the trauma for victims’ families and prevents the opportunity for healing and reconciliation called for in the message of Jesus Christ.”

The idea for the pledge campaign took root in January, said Catholic Mobilizing Network executive director Karen Clifton in an interview with Catholic News Service. It is supported in part by a $50,000 grant from the U.S. bishops’ Catholic Communication Campaign.

Clifton said Arkansas’ bid to execute eight death-row prisoners in a 10-day span in April — four were ultimately put to death — “exacerbated the situation and showed it as a very live example of who we are executing and the reasons why the system is so broken,” she said.

Penalties for crime are “supposed to be retributive, but also restorative. The death penalty is definitely not restorative,” Clifton said. Those on death row are not the worst of the worst, they’re the least — the marginalized, the poor, those with improper (legal) counsel,” she added.

Bishop Frank J. Dewane of Venice, Florida, chairman of the U.S. bishops’ Committee on Domestic Justice and Human Development, said he and his fellow bishops have voiced their views strongly with Gov. Rick Scott of Florida, where capital punishment is legal and where prisoners have been executed.

Bishop Dewane, in recalling Pope John Paul II’s successful personal appeal to the governor of Missouri to spare a death-row inmate’s life during the pope’s visit to St. Louis in 1999, said the episode offers hope. “It’s a great example,” he added. “You never know how your words will be taken, or accepted.”

Bishop Jaime Soto of Sacramento, California, who was one of a number of bishops who signed the pledge following a daylong meeting May 9 at the U.S. bishops’ headquarters building in Washington, said the church’s ministry to prisoners is another source of hope. “It’s the ministry of companionship that’s so important,” he noted.

Bishop Soto said the ministry of accompaniment is also necessary to the victims of crime. He recalled an instance when a priest of his diocese, who was expected to attend a meeting of priests, had to bow out “because he had to bury someone who had been killed by violence in his neighborhood. … We are not recognizing that the futility of the death penalty system.”

Capuchin Father John Pavlik, president of the Conference of Major Superiors of Men, told CNS that networking is a key tool in the toolbox in spreading information opposing the death penalty. CMSM, he said, has a person on staff to monitor issues surrounding justice and peace, and has consistently communicated capital punishment information to CMSM members.

Father Pavlik said he takes inspiration from an Ohio woman whose child was murdered decades ago. The killer was arrested, tried and convicted on a charge of capital murder, “and she has spent the last 25 years advocating against the execution of this man.” The priest also voiced his distaste at the “disregard for life” shown in Arkansas, which he said had tried to execute eight death-row prisoners in such a short time because “the drug (used in the fatal injection) was going to expire.”