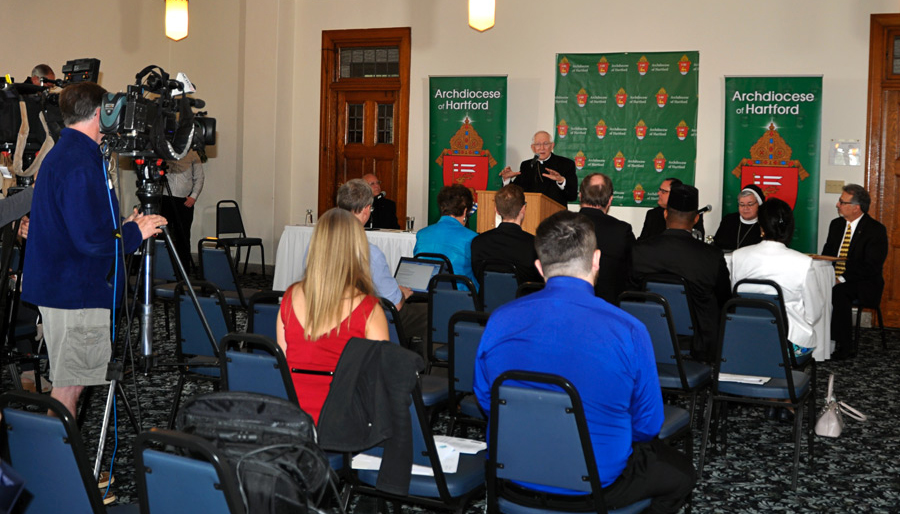 Archbishop Leonard P. Blair addresses the media during an announcement of the new pastoral plan for the Archdiocese of Hartford on May 7 at the Archdiocesan Center at St. Thomas Seminary in Bloomfield. (Photo by Shelley Wolf, the Catholic Transcript)

BLOOMFIELD, Conn. (CNS) — The new pastoral plan that the Archdiocese of Hartford announced May 7 involves a number of parish closings and mergers.

The changes, announced during a news conference at the Archdiocesan Center at St. Thomas Seminary, will leave the archdiocese with 127 parishes, down from its current total of 212. It also calls for 144 parishes to merge into 59 newly named parishes and for 68 parishes to remain unchanged, said Father James Shanley, vicar of the Office of Pastoral Planning.

Church officials cited the changing demographics, lower Mass attendance and fewer priests as drivers for the new plan. They also said change brings an opportunity to breathe new life into the practice of the faith.

“This is ultimately not a question simply of resources and material concerns,” Hartford Archbishop Leonard P. Blair said. “This is a question about the church’s mission. We have always said that the hope here is for a revitalized, more vibrant church life.”

The plan is the result of a two-year consultative pastoral planning process that involved meeting with priests and parishioners to respond to their needs and concerns and to incorporate them into the final plan.

Additionally, more than 40 priests are also being reassigned, the archbishop said.

“It is complex precisely because we are not trying to apply a cookie cutter to every situation,” he added.

The Archdiocese of Hartford serves nearly 550,000 Catholics. The cities in the archdiocese, where Catholics have moved out to the suburbs and new immigrant groups are coming in, will be most impacted by upcoming changes.

Archdiocesan Catholics were told about the plan during weekend Masses from letters sent to parishes by Archbishop Blair and read by priests. In the letter, the archbishop urged parishioners to “be good neighbors to our fellow Catholics” and to reach out in love to one another.

“The archdiocese is not a structure as much as it is a family of faith,” he said at the news conference. “That is what we are.”

The 26 church buildings slated for closure may be repurposed for other parish ministries such as soup kitchens, or may be sold, based on the needs of the parish and with approval from the archbishop. If buildings are sold, “the assets follow the people,” Father Shanley said.

The church leaders acknowledged the emotional challenge of letting go of former parishes and church buildings but stressed the need to see this step as a necessary path to renewal.

“To try and hold onto something, a structure or a skeleton that no longer corresponds to the realities of today ultimately can be discouraging and diminishing,” the archbishop said. “The point is to revitalize the mission, to really have a sense of bringing people more closely together.”

The speakers cited three recent parish mergers that had begun ahead of schedule as hopeful signs of what can come from newly formed parishes.

Archbishop Blair also pointed to recent changes in its central offices as positive steps, including the publication of an archdiocesan magazine instead of a newspaper.

“It fits the mission,” he said, noting that the new publication shares individual’s stories of faith and puts a spotlight on what parishes and people are doing to promote it.

The archdiocese is also placing more emphasis on youth and campus ministries and recently created a new Office of Faith and Culture to address its diversity of cultures.

“It is an historic moment. This is not the end of something, this is the beginning,” he stressed. “New beginnings bring fresh life … because when people can create something instead of just hanging onto things as they’ve been. There’s a certain energy and a grace to that.”

Wolf is a reporter for the Catholic Transcript, Hartford’s archdiocesan magazine.

NEXT: Bishops among first signatories to pledge to end death penalty