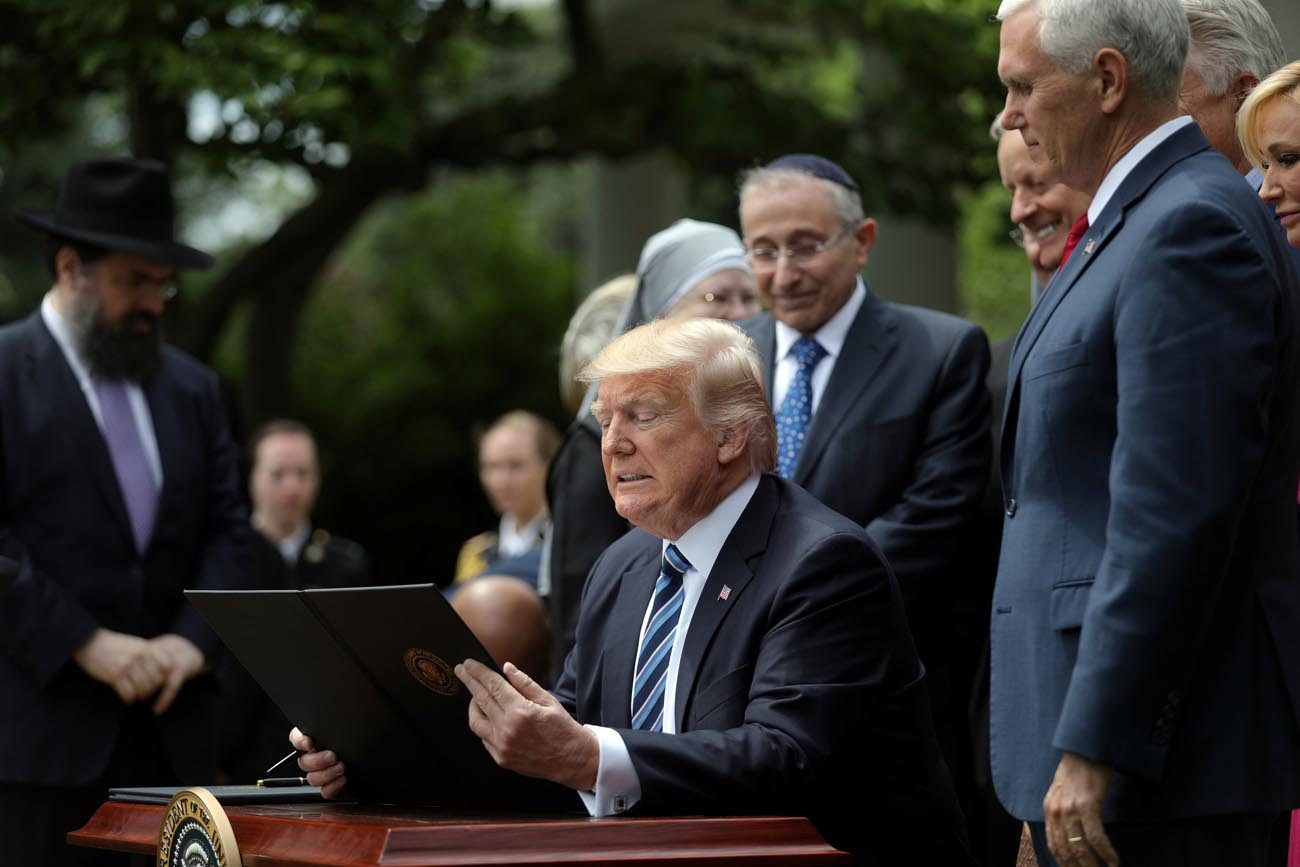 President Donald Trump prepares to sign his Executive Order on Promoting Free Speech and Religious Liberty during the National Day of Prayer event at the White House in Washington May 4. (CNS photo/Carlos Barria, Reuters)

WASHINGTON (CNS) — Many religious leaders viewed President Donald Trump’s executive order on religious freedom, which he signed in a White House Rose Garden ceremony May 4, as a step in the right direction.

In the ceremony for National Day of Prayer prior to signing the executive order, Trump told the assembled religious leaders: “We’re taking big steps to protect religious liberty” and he assured them the government “won’t stand for religious discrimination.”

Three religious leaders, including Washington Cardinal Donald W. Wuerl, offered prayers during the ceremony. Just prior to the event, Cardinal Wuerl and Cardinal Daniel N. DiNardo of Galveston-Houston, president of the U.S. Conference of Catholic Bishops, met with Trump about the order.

In a statement issued after the order was signed, Cardinal DiNardo said the executive order “begins the process of alleviating the serious burden of the HHS mandate,” referring to the mandate issued by the federal Department of Health and Human Services requiring most religious employers to provide coverage of artificial birth control for their employees even if they morally oppose it.

But Cardinal DiNardo also stressed that the U.S. bishops will “have to review the details of any regulatory proposals.”

The text of the order, “Promoting Free Speech and Religious Liberty,” states that cabinet offices “shall consider issuing amended regulations, consistent with applicable law, to address conscience-based objections to the preventive-care mandate.”

During the White House ceremony, Trump told some of the Little Sisters of the Poor in the crowd: “Your long ordeal will soon be over.” The sisters are just one of the groups that challenged the federal contraceptive mandate all the way to the U.S. Supreme Court.

Mother Loraine Marie Maguire, superior of the Little Sisters’ Baltimore province, said in a statement that the sisters are “grateful for the president’s order and look forward to the agencies giving us an exemption so that we can continue caring for the elderly poor and dying” without fear of government punishment.

Another aspect of the order is a weakening of what Trump called the “unfair” Johnson Amendment during the May 4 event. The 1954 amendment bans churches and nonprofit organizations of all types from participating in partisan political activity at the risk of losing their tax-exempt status.

Trump told the religious leaders that the order’s attempt to lessen restrictions of the amendment will be “giving our churches their voices back.”

The order states the Treasury Department shall ensure and “respect and protect the freedom of persons and organizations to engage in religious and political speech.”

It also calls for department officials to “not take any adverse action against any individual, house of worship, or other religious organization” for speaking about “moral or political issues from a religious perspective.”

Cardinal DiNardo, in his statement, stressed that in recent years, “people of faith have experienced pressing restrictions on religious freedom from both the federal government and state governments that receive federal funding.”

He noted that church agencies have specifically experienced such a restriction in adoption, education, health care and other social services, where he said “widely held moral and religious beliefs, especially regarding the protection of human life as well as preserving marriage and family, have been maligned in recent years as bigotry or hostility.”

“But disagreement on moral and religious issues is not discrimination; instead, it is the inevitable and desirable fruit of a free, civil society marked by genuine religious diversity,” he added.

The White House did not release the full text of the order prior to the signing. A draft of the order was leaked to the Nation magazine soon after Trump’s inauguration and included much stronger language.

Regarding the new order, Cardinal DiNardo said the bishops will “continue to advocate for permanent relief from Congress on issues of critical importance to people of faith,” noting that religious freedom is “a fundamental right that should be upheld by all branches of government and not subject to political whims.”

Richard Garnett, professor of law at the University of Notre Dame, said in an email to Catholic News Service that the order will likely be viewed as a commitment from the administration that it wants to protect religious liberty. “In terms of specifics, however, the order does very little and does not address a number of pressing and important questions.”

Dominican Sister Donna Markham, president and CEO of Catholic Charities USA, also welcomed the order and said the organization “looks forward to reviewing the details” of it with the hope that applying it will “allow Catholic Charities agencies to continue to serve all their clients in accordance with their inherent dignity while at the same time preserving the freedom of these agencies to serve in conformity with our beliefs.”

PREVIOUS: Pope Francis to meet Trump at Vatican May 24