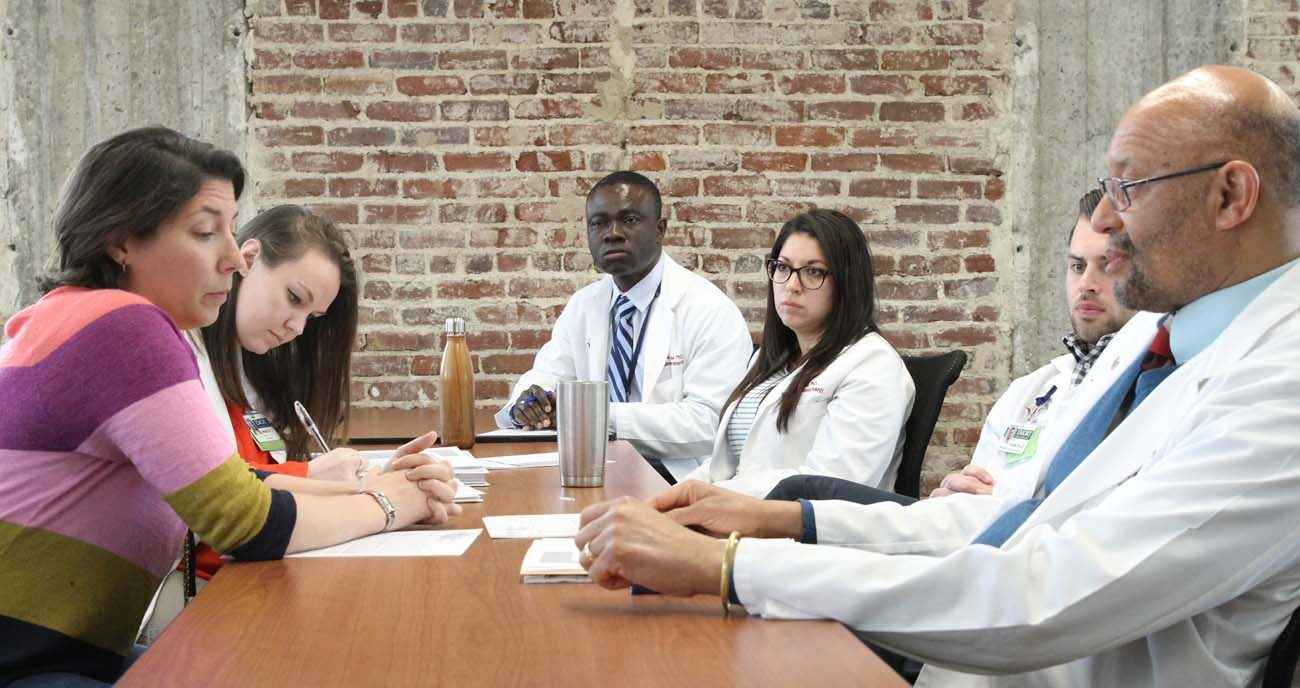 Father Jean N. Ikanga, a member of the Society of the Divine Word, center back, listens during an March 3 meeting at Emory University School of Medicine in Atlanta. Father Ikanga, a native of the Democratic Republic of the Congo, holds a bachelor's degree in neuroscience and psychology and a doctorate in clinical psychology. (CNS photo/Michael Alexander, Georgia Bulletin)

DECATUR, Ga. (CNS) — Religion and science have intertwined in Divine Word Father Jean Ikanga’s life and it began with a fearful mother.

The woman in his native Congo desperately wanted help for her 9-year-old daughter, sick with “evil spirits.” Concerned by her story, Father Ikanga provided prayer and pastoral counseling but also asked the woman and her daughter to meet with a psychiatrist at the University of Kinshasa.

Through collaboration, the “spirits” that plagued the child were revealed to be post-traumatic stress syndrome, a result of the girl seeing her father killed, witnessing and experiencing rape, and facing other types of violence. It was Father Ikanga’s first exposure to the mystery of the brain and how it processes what goes on inside the body.

“That story changed my life,” he said.

Father Ikanga said he felt that he needed more knowledge to use science and medicine in service of the Gospel. That’s what set him on a path to Emory University in Atlanta.

Following more than a decade of scientific and medical education in the United States, Father Ikanga is a neuropsychologist and a fellow at Emory. He has found that faith and science build on one another.

“I came to a faith understanding that to look at the human body and not believe in God is impossible,” he said.

The priest recalled conversations with surprised colleagues when he told them that not only is he probing the unknown areas of dementia, but also he is a priest celebrating Mass on weekends.

“They could not imagine a priest becoming one of them. For them, the priest is in the sacristy and at the altar, not in the lab. They are bewildered a priest can be a colleague,” Father Ikanga said.

He responds with the observation of how he is surprised a scientist can balance the demands of research and parenthood.

When he’s not assisting at parishes, Father Ikanga, 45, sees patients at the Emory University School of Medicine. He has studied in the U.S. since 2006, starting at Regis University in Denver, where he earned a bachelor of science degree while serving at a local parish. He earned his doctorate in clinical psychology at the University of Detroit Mercy. His internship and residency for the last three years brought him to Emory. His residence is at Atlanta’s Holy Spirit Parish.

In Congo, there are few clinicians to aid people living with the aftermath of violence. Father Ikanga believes he will be the only neuropsychologist in the country of 67.5 million people, 50 percent of whom are Catholic, when he returns. The Congo is Africa’s most Catholic country, about one-quarter the size of the United States.

Parts of Congo though have suffered through war for decades. An estimated 6 million people died in conflicts there from 1996 to 2003. The United Nations has 19,000 troops deployed there, its costliest peacekeeping operation.

Father Ikanga’s goal is to lay a foundation for a new program in neuropsychology at the Catholic University of St. Augustine in Kinshasa. While in Detroit, he also attended physician assistant training so that he can assist people with ailments when a nurse or doctor was not available.

Sitting in a cafeteria at Emory University Hospital, Father Ikanga wore a blue checked shirt and a lanyard and badge common in corporate settings. At the hospital, his focus is on science for his patients’ sake, not matters of faith.

“My colleagues know I am a priest. To my patients, they don’t know that I am a priest,” he said. “They come to be treated. They don’t come for pastoral work. That does not come up in discussions.”

Born to coffee farmers, Father Ikanga is one of eight children. Growing up, he attended Catholic school and played soccer in the afternoon after Mass. His family attended Sunday Mass and he was an altar server.

His ambition was not to become a priest as a young man. Instead, he saw himself as either a pilot or a doctor. He said at home he learned about the Catholic faith and at school he learned about science. “I was a bright kid. Anything math, that was my topic.”

His vocation grew out of watching a priest spend time with his family, caring for his mother and father during a family crisis. The memory made an impression. At Mass later when the final song was the prayer of St. Francis, he realized his desire was to be “a channel of peace like the priest was to my family.”

After 12 years of seminary, Father Ikanga was ordained in 2003 at St. Aloysius Gonzaga Church, the parish where he was baptized and grew up. Father Ikanga’s religious superiors thought it would be good for him to undertake additional study and return with up-to-date treatment practices as a founding member of the university program. That’s when he enrolled at Regis University.

He believes it is God’s mandate that fuels science. He reads the story in Genesis of God’s command to “subdue the world” as an instruction to push the boundaries of knowledge.

God gave us the responsibility to “be co-creators and continue the work of creation,” he said.

Father Ikanga confronts the heartbreak that comes from brain afflictions in his practice. His area of expertise is dementia that robs a person of memory.

“Dementia is a Good Friday in our life,” he said. “I know there will be an Easter Sunday when suffering is over. And we will be face to face with God.”

Nelson is a staff writer for the Georgia Bulletin, newspaper of the Archdiocese of Atlanta.