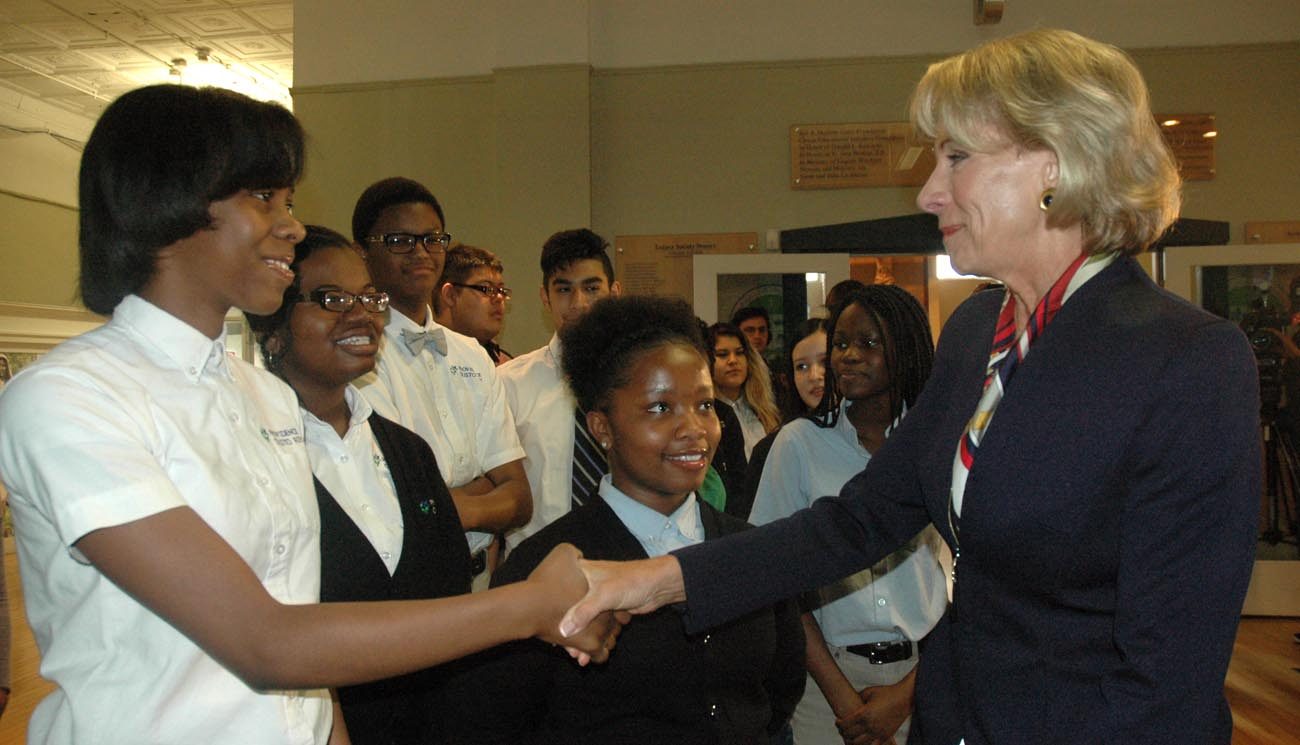 U.S. Secretary of Education Betsy DeVos shakes hands with Alexis Stratton, a freshman at Providence Cristo Rey High School in Indianapolis, during the secretary's May 23 visit to the school. (CNS photo/John Shaughnessy, The Criterion)

INDIANAPOLIS (CNS) — As Precious Mayfield and Froylan Avila awaited the arrival of U.S. Secretary of Education Betsy DeVos at their school May 23, the two students talked about the impact that Providence Cristo Rey High School in Indianapolis has had on them and their families.

The two teenagers will both be the first in their families to go to college.

“It makes me feel very accomplished that I can fulfill the dreams that my family has,” said Mayfield, who is 17.

Standing nearby, 19-year-old Avila said, “Anything is possible if you put your mind to it, and you work hard.”

Moments later, Mayfield and Avila were among a group of students who were welcoming and shaking hands with a smiling DeVos as she entered the school that combines a work-study program and a college preparatory education for students from low-income families.

It’s a model that has led all 46 students in the school’s class of 2017 to be accepted into college. It’s also a model that intrigued DeVos so much that she made a special visit to Providence Cristo Rey as part of her two-day trip to Indianapolis.

On May 22, the secretary of education arrived in Indiana’s capital to address the national policy summit of the American Federation for Children, a national advocacy organization for school choice that she once served as chairperson.

During the summit, DeVos noted that President Donald Trump is “proposing the most ambitious expansion of education choice in our nation’s history.”

While she didn’t offer details of the president’s plan, she did add, “If a state doesn’t want to participate, that would be a terrible mistake on their part. They will be hurting the children and families who can least afford it.”

About 34,000 students in Indiana attend private schools through the state’s school choice program. About 8,000 of the 24,000 students who attend the 69 Catholic schools in the Archdiocese of Indianapolis are there because of school choice. And 97 percent of the 255 students at Providence Cristo Rey are there through Indiana’s voucher program.

DeVos came to Providence Cristo Rey as the high school marks its 10th year of existence. She met with students, staff and stakeholders of the private school.

According to people who were there for her meeting with stakeholders of the school, DeVos said she admired the approach of the school and wanted to learn more about the national network of 32 Cristo Rey Catholic schools that has about 11,000 students across the country.

During that meeting, DeVos heard from Jane Genster, president and chief executive officer of the Cristo Rey national network of schools.

“We are honored that the secretary of education wants to come to our schools and see what we’re doing,” Genster said after the meeting. “Our schools are deeply connected with their communities through the work-study program. That sense of community is a very Catholic quality.”

Providence Sister Dawn Tomaszewski also spoke. The superior general of the Sisters of Providence of St. Mary-of-the-Woods told the secretary that the Archdiocese of Indianapolis had come to the Providence sisters for help in establishing the school.

“We knew we could make an impact on the lives of children who are economically challenged,” Sister Dawn said. “They’re learning about God, and they have hope, and they have faith.”

DeVos also heard from Montanea Daniels, a member of the first graduating class of Providence Cristo Rey, who is now a member of the school’s board of directors and a biologist for Eli Lilly & Co., in Indianapolis.

That theme echoed through DeVos’ visit to Providence Cristo Rey. When school president Joseph Heidt and school principal Brian Dinkins led her on a tour of the school, they stopped in a science class. After observing a lesson, DeVos asked the students if any of them wanted to talk about their experience at the school. Three did, offering such glowing praise that Dinkins joked that he would have to buy them lunch.

While DeVos didn’t take questions from the media during her visit, she repeatedly showed her interest and engagement by asking questions of the teachers and the students she met that morning.

“Does working a day a week make a difference in your education?” she asked at one point.

“How many of you have learned through your work experience that you wanted to do something different?”

Her easygoing interaction relaxed the six seniors, including Mayfield and Avila, who were chosen to share brief presentations about the impact that their work-study programs had on their confidence, their career choices and their lives.

Their class graduated May 25 at SS. Peter and Paul Cathedral in Indianapolis; 75 percent of the seniors have earned college scholarships.

After listening to their presentations, DeVos told the six seniors, “It sounds like this whole experience has given you a whole lot of confidence.”

Before she finished her 90-minute visit to the school, DeVos had one last question for the six students: “If you were to encapsulate your experience at Cristo Rey in one sentence, what would that be?”

The first to respond was Cheick Diallo, who has earned a scholarship to the University of Notre Dame where he wants to pursue a major in neuroscience.

Diallo smiled at the secretary of education and said, “Take advantage of the opportunity because it really is life-changing.”