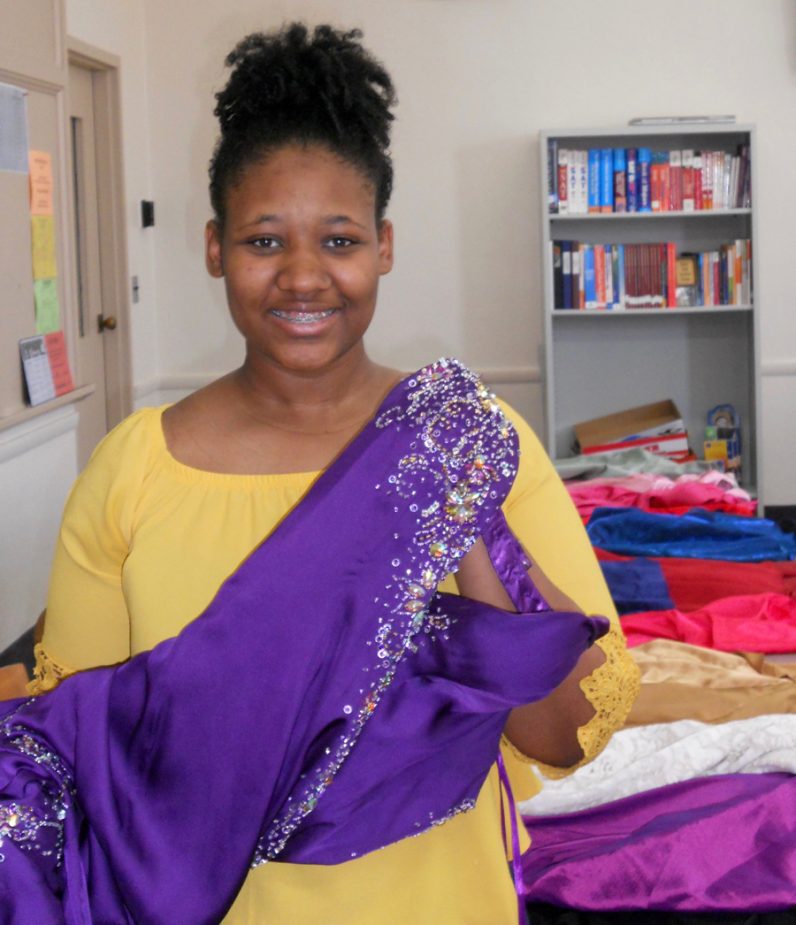 Ashley Wilson, a senior at Villa Angela-St. Joseph High School in Cleveland, displays some of the prom gowns May 18 that she collected for girls who were unable to afford one. (CNS photo/Jerri Donohue)

CLEVELAND (CNS) — Ashley Wilson beamed at the array of sequined and beaded gowns in pink, purple, red, blue and black. But she wouldn’t wear any of them to her prom the following evening.

The senior graduating from Villa Angela-St. Joseph High School in Cleveland had gathered the collection for Prom Me Please, her effort to give prom dresses to girls who couldn’t afford to buy them.

“A lot of people told me this was a really dumb idea, that girls didn’t need prom dresses,” Wilson told Catholic News Service. “And I gave away 200! So it definitely is something that is needed.”

Last fall, Wilson decided to celebrate her 18th birthday by collecting and distributing prom gowns. She thinks all teenagers should have a chance to experience prom, a sometimes prohibitively expensive tradition.

David Csank, principal of Villa Angela-St. Joseph, permitted the teen to use the school as a collection point.

“It’s really something we preach to these students all the time,” Csank said. “You look out for others. You take care of others. That’s what we believe we are called by God to do.”

School personnel helped Wilson publicize Prom Me Please through social media and on local television and in the newspaper. They also notified alumni of her project.

As a result, on a Saturday in November, women brought almost 100 formal dresses to the school.

“She’s a saint,” Wilson told CNS. “I had 400 dresses in the living room, in my room, right in the middle of holiday time.”

Strangers soon caught Wilson’s enthusiasm. She held her first giveaway in late February in a space lent by a nonprofit group. That day, prom-goers received free consultations with hair stylists and a makeup artist. Volunteer seamstresses made on-site alterations.

Girls scheduled appointments to shop, but Wilson welcomed walk-ins, too. To qualify, shoppers showed their student ID or report cards.

Wilson’s friends set up a donation jar for those who wanted to contribute. Many girls dropped change or dollar bills in the jar.

“They don’t have money for a prom dress,” Wilson said. “But they still give me money when I’m offering it to them for free!”

Wilson used the funds to send dresses to 10 prom-goers in New York, New Jersey and Georgia who discovered Prom Me Please on Instagram.

“It’s pretty pricey,” the teen said. “A lot of the girls ask at the last minute and I have to rush-ship it.”

Wilson held two additional dress giveaways in the spring, ultimately enabling more than 200 girls to attend prom. Most of the gown recipients later sent her photos snapped at their dances.

“Being around all those girls, getting to know them, that was the most rewarding part,” Wilson said. “They were very appreciative. They were the sweetest people I’ve ever met. I think they blessed me more than I blessed them, to be honest.”

Busy with Prom Me Please, Wilson did not purchase her own prom gown, a sparkly red dress, until one week before the event. But she still isn’t finished with prom. With almost 200 gowns remaining, she will repeat her project next year, adding venues to reach more needy young women.

A freshman at Ursuline College in Ohio this fall, Wilson aims for a career helping disadvantaged children. Meanwhile, she advises teens to ignore critics who say their idea for a charitable endeavor is unnecessary. Prom Me Please clearly met an unrecognized need.

“And I’m sure whatever you may want to do deep in your heart is probably needed also,” Wilson said.