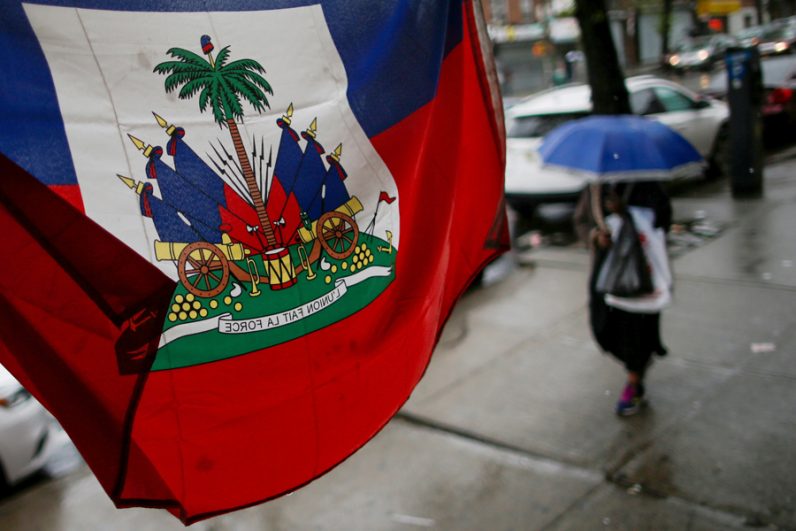 A flag from Haiti hangs outside a store as a woman walks with an umbrella May 13 in Brooklyn, N.Y. Tens of thousands of Haitians enrolled under the Temporary Protected Status program can stay in the United States until at least January. (CNS photo/Eduardo Munoz, Reuters)

WASHINGTON (CNS) — Tens of thousands of Haitians enrolled under the Temporary Protected Status program can stay in the United States until at least January.

Secretary of Homeland Security John Kelly renewed the designation May 22. The decision affects more than 58,000 Haitians in the U.S.

The designation, also known as TPS, was implemented by the U.S. government for Haiti days after a powerful earthquake in January 2010 leveled much of the country surrounding the capital of Port-au-Prince. It allowed Haitian nationals to stay in the U.S. because of adverse conditions in their homeland.

Kelly did not adopt the recommendation of the acting director of the U.S. Citizenship and Immigration Services that called for ending the designation for Haitians altogether in July. In an April 10 memo to Kelly, James W. McCament said “conditions in Haiti no longer support its designation for TPS,” but suggested delaying the effective date of the termination for six months to allow “for a period of orderly transition” for Haitian nationals.

The homeland security secretary stopped short of saying the designation automatically would be renewed again in January. In a statement Kelly urged that Haitian nationals begin to assemble travel documents and “make other necessary arrangements for their future departure” from the U.S.

“Haiti has made progress across several fronts since the devastating earthquake in 2010, and I’m proud of the role the United States has played during this time in helping our Haitian friends,” Kelly said.

Bishop Joe S. Vasquez of Austin, Texas, chairman of the U.S. bishops’ Committee on Migration, said he was grateful Kelly and the Trump administration gave the six-month extension, but added, “It still leaves many Haitian families in the United States in an insecure and vulnerable position, particularly with respect to ensuring legal work authorization.”

“Extending TPS serves an important humanitarian role by providing for the safety, well-being, and stability of Haitians living in the United States,” he said in a statement. “We encourage our government to work proactively with the Haitian government to provide life-saving aid and recovery assistance. Haiti will continue to struggle to receive back those who are temporarily protected, even those who may be returned in the near future.”

He said the Catholic Church through its various service networks “will continue to assist Haitian families in the U.S., aid the rebuilding process in Haiti and look for opportunities to collaborate with the church in Haiti and the Haitian and U.S. governments.”

Kelly’s statement said the “Haitian economy continues to recover and grow, and 96 percent of people displaced by the earthquake and living in internally displaced person camps have left those camps.” He also cited Haitian government plans to rebuild the presidential residence on the grounds of the National Palace destroyed in the earthquake and the withdrawal of the United Nations stabilization forces as signs of progress.

In addition, Kelly said he had heard from the Haitian government regarding its desire to welcome Haitian TPS recipients.

Advocates have disagreed with McCament’s assessment and have said Haiti is experiencing the same dire social challenges and deep poverty that existed when the TPS designation first was made. Haiti’s recovery, advocates also argued, suffered a setback when Hurricane Matthew inundated farms and communities in the country’s southwest peninsula in October.

One of organizations advocating for Haitians, the Catholic Legal Immigration Network, said in a statement that the extension concerns those with Temporary Protected Status because they will be required to return to their still unstable homeland.

“The extension of TPS for another six months is nothing more than a brief respite,” Jeanne Atkinson, CLINIC executive director, said in a statement.

“Kelly’s statement making this announcement suggests he doesn’t truly understand the purpose of TPS and its basis in what the conditions are in an affected country,” Atkinson said. “His remarks ignore that it would be inhumane to precipitously force tens of thousands of people back to a country that still suffers from dramatic levels of homelessness, an ongoing cholera epidemic and other systemic deficits, such as a lack of clean water. An adequate national recovery to support their return is far more than six months down the road.”

The designation of Temporary Protected Status can be made for any country because of a natural disaster, continuing armed conflict or other extraordinary conditions under the Immigration Act of 1990.