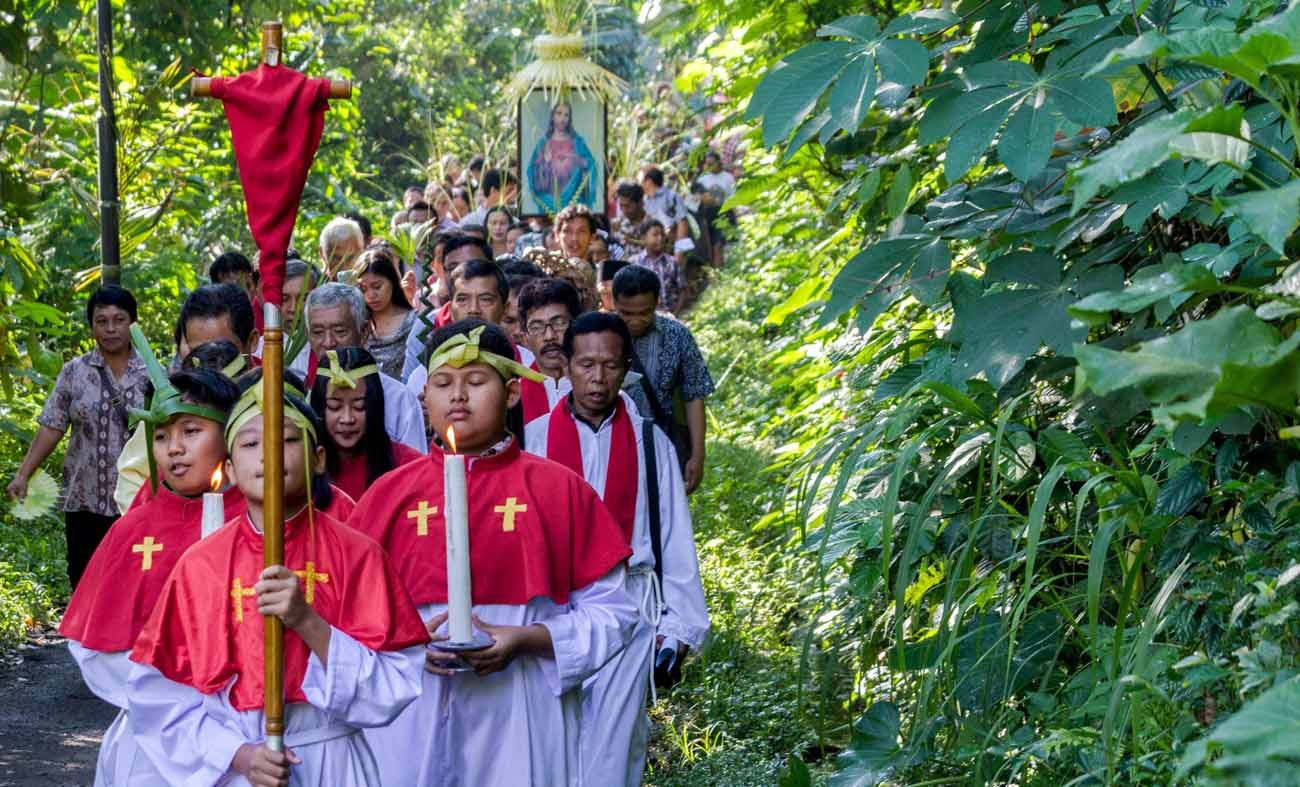 Indonesian Catholics participate in an outdoor Palm Sunday procession April 9, 2017, in Semarang. Mutual respect among religions, and freedom of religion "is one of the basic rights in Indonesia."(CNS photo/Antaea Foto, Reuters)

NEW YORK (CNS) — Catholic leaders met with an Indonesian delegation at the Manhattan residence of Cardinal Timothy M. Dolan to discuss religious liberty and other issues.

The delegation included representatives of the Leimena Institute of Indonesia, a Christian think tank that is described on its website as “a non-profit organization for the studies of public policies and emerging public concerns, in promoting the good for our nation.”

Among those present at the April 24 meeting were the organization’s president, Jakob Tobing, a former Indonesian ambassador to South Korea; Matius Ho, executive director; and two Indonesian scholars.

The institute works with the Islamic scholars to help broaden awareness of Indonesian Islam and how it represents a “middle path” that is opposed to violent extremism. After the New York visit, the delegation headed to Washington and Los Angeles.

The Indonesians described the meetings with U.S. religious, political and civic leaders as important to raising awareness of religious pluralism that exists in Indonesia, the country with the world’s largest Muslim population.

Mutual respect among religions, and freedom of religion, Tobing told Catholic New York, newspaper of the Archdiocese of New York, “is one of the basic rights in Indonesia.”

“That’s now being threatened by this radical Islam,” he said, “so we now endeavor how to preserve this, and to build a stronger, pluralistic, harmonious society in Indonesia, and also to have Indonesia’s case heard in the world.

“Hopefully, we can establish cooperation … to build this harmonious relationship among the various religions in the world,” he added.

Tobing described the Manhattan meeting as open, friendly and positive toward those proposals.

“The Catholic Church here is ready to work together with us in promoting this kind of harmonious … cooperation, not just understanding, but cooperation,” Tobing said.

Cardinal Tobin described the gathering as “a useful exchange of views, especially to present a face of Islam that a lot of Americans wouldn’t be familiar with because of the sort of caricature of Islam, of Muslims, as being violent and intolerant.”

“This was an entirely different message,” he said.

The takeaway, Cardinal Tobin said, “is that this was outreach on behalf of peace-loving Muslims in Indonesia to ask our assistance in getting the message out.”

Bishop Rozanski, chairman of the U.S. Conference of Catholic Bishops’ Committee on Ecumenical and Interreligious Affairs, said he was “very, very heartened” to meet with the Leimena organization “because of their commitment to religious tolerance and because they want to spread the message that Islam is indeed a religion that is committed to peace.”

The seriousness of the Indonesians’ commitments was encouraging, Bishop Rozanski said, “and I’m sure will be an example for all of us of religious tolerance, and how we can work together.”

Bishop Massa added, “Indonesia holds out to the rest of the Muslim world and to the community of interfaith leaders a model of not only religious tolerance but engagement on important issues like religious freedom.”

Chicoine is news editor at Catholic New York, newspaper of the Archdiocese of New York.

PREVIOUS: The better educated, the less religious? Not so for Christians

NEXT: Kansas family among first to aid fellow farmers affected by wildfires