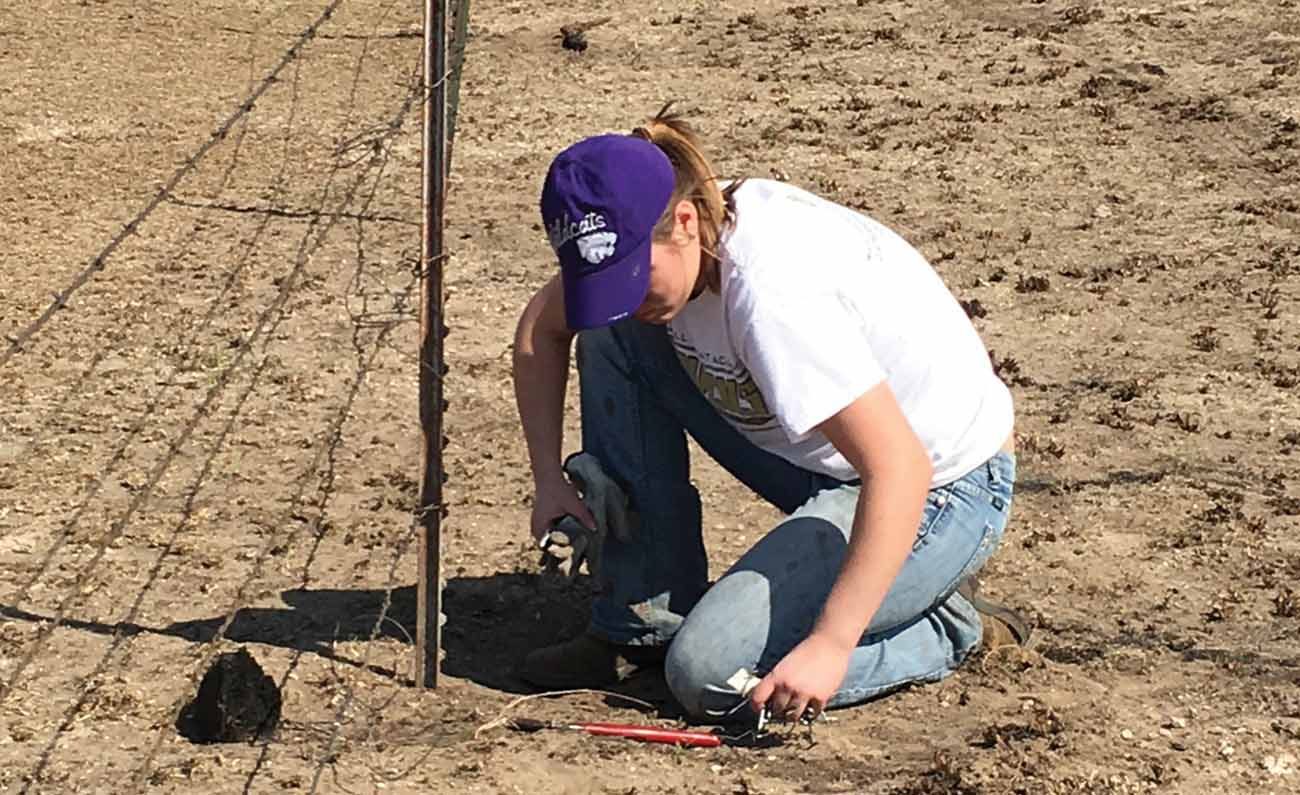 Emma Joyce, a junior at Maur Hill-Mount Academy in Atchison, Kan., and a parishioner of St. Benedict Church in Bendena, Kan., helps repair a fence line March 22 at a ranch near Ashland, Kan., The ranch had sustained damage from a devastating wildfire that swept through that portion of the state in early March. (CNS photo/courtesy Amy Joyce)

KANSAS CITY, Kan. (CNS) — Father Prakash Rao Kola was in Coldwater, Kansas, 30 miles east of Ashland, the afternoon of March 6 when he began to get frantic calls from parishioners.

High winds were driving a fire — a big one — swiftly toward the southwestern Kansas town. People were warned to evacuate.

Father Kola, a Missionary of St. Francis de Sales, raced back to St. Joseph Parish in Ashland, where he is pastor. As he got closer to town, he saw “miles and miles of smoke.” The fire looked like it would consume the entire town. Law enforcement officers were driving up and down the streets, announcing on loudspeakers: “Evacuate, evacuate. Move fast, move fast.”

He had about 10 minutes to grab and go.

“I didn’t know what to take,” Father Kola said, so he took his passport and important documents and headed back to Coldwater and Holy Spirit Parish, where he also ministers.

Father Kola spent two days in Coldwater, sleeping on the floor of the church. He was fortunate. Ashland and the church were spared. But some of his parishioners — farmers and ranchers, for the most part — lost everything. The largest prairie wildfire in Kansas history of Kansas had transformed much of Clark County into a land of ash.

But a question remained: Would help come after the fire?

Across the state, Amy Joyce tracked the progress of the prairie fires March 6-8 with heartbreak and distress.

The wind-whipped flames raced through the Texas panhandle, Oklahoma panhandle and Kansas. The largest, the Starbuck fire, left Ashland an unburned island, but at least 75 percent of Clark County was burned.

To the rest of the world, the wildfires were a brief item in the news and quickly forgotten. Not for Amy though. She could feel the heartache of the people affected.

Marty and Amy Joyce, and their four children — Wade, 19; Emma, 17; Abby 15; and Sam, 11 — are sixth-generation family farmers and members of St. Benedict Parish in Bendena, 16 miles north of Atchison in northeastern Kansas. Marty takes care of the crops and cows, while Amy is a fifth-grade teacher at the parish school.

“I follow some agriculture groups on Facebook,” she said. “The following days after I began reading pleas for help, I began seeing photos of the damage. There was this urge that just wouldn’t go away that we need to help, to do something.”

Initially, she dismissed the urge as impractical.

But it wouldn’t go away.

“It really touched my heart to hear how these people lost everything,” Amy said. “They lost their livestock, their homes, all their hay and grass, and thousands of miles of fences. Their animals died in the fire or were burned so badly that they had to put them down.”

The family knew that they possessed both the skills and the wherewithal to help. Son Wade, a freshman at Northwest Missouri State University, worked last summer with a fence-building crew. Amy called around and found someone who could connect them with a local ranch family and lodging at a church camp.

The timing was right, too, because it was spring break for the schools.

Marty couldn’t go, so Amy and the kids drove to Wichita March 21. Early the next morning, they continued to Ashland. Within 30 minutes, they were assigned a rancher and were off to build and repair fences.

They drove 30 miles southwest to a 6,000-acre ranch that had burned in less than 15 minutes. The 160 head of cattle on the ranch survived by hiding in a “mini-canyon” where the fire couldn’t go.

All around, the Joyces saw a weird landscape: open land to the horizons, a sea of black interspersed with skeletal trees; cow and horse corpses amid remnants of homes and outbuildings.

But the family got to work. They rolled up barbed wire and pulled up charred posts. In some places, they put up new posts and hung wire, and in other places they mended broken wire. Everyone had a job. Wade dug holes with a post-hold digger. Emma set T-posts with a driver. Sam put clips on the posts to hang wire.

“At first, I didn’t want to do it,” said Emma, a junior at Maur Hill-Mount Academy in Atchison. “I wanted to be on spring break, doing my own thing.

“But after seeing what all those people went through, I know it was the right thing for me to be there.”

Recovery will take a long time. It will be years before the cattle herds to recover — not only in terms of numbers, but their genetic legacy as well.

The system of fences installed by generations of family ranchers will have to be rebuilt. The rangelands will need at least a couple of years to grow, so donated hay still is desperately needed. The burned farm structures and machinery must be replaced. So will the homes and their contents. Precious family heirlooms are gone.

St. Joseph Parish in Ashland, with 75 families, and Holy Spirit “quasi-parish” in Coldwater, with 20 families, have offered what they can.

“Most of our parishioners are ranchers, so we have four or five families who have lost their homes,” said Trisha Elliott, St. Joseph parish council member and director of religious education.

Elliott didn’t evacuate Ashland. She handed out food, water and ice at the fire station while her volunteer firefighter husband Adam worked to save the town.

The Diocese of Dodge City, through Catholic Charities of Southwest Kansas, is gathering relief funds.

“The response from farmers and ranchers, and various organizations, has been tremendous,” said Debbie Snapp, the agency’s executive director.

“The people we are most concerned about are those who have no business or have a few acres with chickens and goats,” Snapp added. “They’ve lost homes and are not in a position to get the same kind of assistance as the big farms and ranches prevalent in this part of the state.”

Catholic Charities is assessing needs and connecting people with resources and donations. Their focus is on individual needs, like replacing hearing aids and eyeglasses and providing temporary housing assistance.

The challenge is daunting, but these descendants of pioneers and Dust Bowl survivors are courageous and dogged. They won’t give up. And with help from the extended agriculture family and God, they’ll make good on their vows to rebuild.

“God is really blessing us,” he said. “We’ve had good rains for the past two weeks and we can see the greenery — the grass is coming now. God never leaves us. Our prayers are heard, and he is blessing us with rains. We are happy God is blessing us.”

Bollig is senior reporter for The Leaven, newspaper of the Archdiocese of Kansas City, Kansas.

NEXT: Pope Francis to meet Trump at Vatican May 24