Iowa Medicaid reimbursements will no longer go to abortion providers 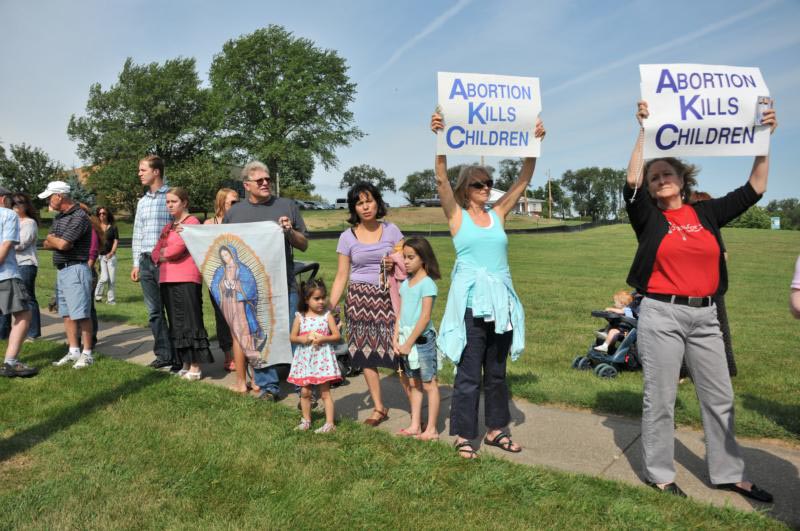 People hold pro-life signs in front of Planned Parenthood in Bettendorf, Iowa, in 2015. The Iowa Legislature voted to end Medicaid reimbursements to family planning clinics that do abortions, which includes Planned Parenthood. Four Iowa clinics will close. Three closed June 30 and the Bettendorf clinic was the next to close. (CNS photo/Lindsay Steele, The Catholic Messenger)

The clinics in Burlington, Keokuk and Sioux City will close effective June 30. The fourth clinic, in Bettendorf, will close later, according to news sources.

The state will provide funds to continue a $3.3 million family planning program at no cost to Iowans making less than 300 percent of the federal poverty level. No funding will be provided for health services received at facilities where abortion services are offered.

“We oppose sending public money to abortion providers. Catholics have always made the needs of the vulnerable a priority through services such as Catholic Charities, hospitals, and advocacy for public policy that protects the marginalized,” said Tom Chapman, executive director of the Iowa Catholic Conference, the public policy arm of the state’s Catholic bishops.

Sarah McCreary, founder of the University of Iowa Students for Life, said she was ecstatic when she heard the news about the clinics’ closure.

“The thing about Planned Parenthood is that they count a lot of other services that they do, but their annual reports show very differently,” she told The Catholic Messenger, Davenport’s diocesan newspaper.

“They do fewer than 2 percent of the nation’s cancer screenings, and the ones they do offer are very limited. They do one-third of the nation’s abortions,” she said. “They are definitely a company that focuses on abortions. I’m thrilled that my tax dollars are going to be reallocated to organizations that truly provide care to women and families. It’s a wonderful thing because I don’t want my tax dollars going to organizations that provide abortions.”

Said Sheryl Schwager, executive director of Johnson County Right to Life: “The closure of these facilities represents the wish of Iowans to have their tax dollars support centers that provide more comprehensive health care services that uphold the dignity of life in the womb and that protect the well-being of women and their families.”

She added, “Johnson County Right to Life will continue our mission to educate our community about the value of all life and expose the deception and harm perpetrated by the abortion industry.”

Donna DeJoode, director of religious education for St. Mary Parish in Pella and coordinator of an annual trip to Washington for the March for Life, called the closures “very exciting news.”

“It will not stop us from going to the march until Roe v. Wade is completely reversed and abortion overall is ended, but it is a great beginning to a hopeful end,” she said.

“We’re ready for you.” That’s the response Vicki Tyler, executive director of the Women’s Choice Center in Bettendorf, gives to any woman who may be pregnant but doesn’t know what to do or needs referral services.

Tyler said the pro-life center expects to see an increase in clients when Planned Parenthood stops offering most of its services June 30 and after it finally closes. The two facilities are located across the street from each other in Bettendorf. Other news outlets report that the clinic will remain open for an unspecified time. Planned Parenthood did not return an email and phone call from The Catholic Messenger.

Planned Parenthood offered surgical abortions in Bettendorf until approximately early 2014. Since then, it has offered “medication abortions,” in which two different pills are used to end a pregnancy: mifepristone at the clinic and misoprostol, taken up to 48 hours later, usually at home.

Supporters of keeping abortion legal abortion rights expressed dismay at the closure of the clinics.

“Today’s terrible news means nearly 4,000 women in the Quad Cities will lose access to critical health care services like cancer screenings and birth control, said state Rep. Phyllis Thede, a Democrat from Bettendorf. “I fought against this plan in the Legislature because Republican politicians in Des Moines don’t know what’s best for women and families in the Quad Cities. I’m going to keep working to make sure health care is affordable and accessible to every woman and family in our community.”

Jenifer Bowen of Iowa Right to Life, a spokeswoman for a coalition of groups that lobbied for the new policy, called Planned Parenthood’s announcement one which will empower women.

“The reallocation of our tax dollars, away from the abortion industry, and into the hands of true health care facilities will only empower more Iowa women,” Bowen told The Catholic Globe, Sioux City’s diocesan newspaper. “This brings the total to 20 Planned Parenthoods closing their doors in Iowa since 2010.”

Sherrill Glassmaker, director of Mary’s Choice, a pregnancy resource center adjacent to Planned Parenthood’s Sioux City office, was grateful “prayers have been answered” in the closing of the facilities.

“Mary’s Choice will continue to help women and families — as we always have — and provide them with resources as needed on an individual basis,” she said, adding the center will continue to have Mass celebrated on Fridays with a peaceful protest in front of the Sioux City Planned Parenthood facility, as webcam abortions will continue until June 30.

This story was written by Barb Arland-Fye, Anne Marie Amacher and Lindsay Steele of The Catholic Messenger, newspaper of the Diocese of Davenport; Arland-Fye is editor, Amacher is an assistant editor and Steele is a contributor to the paper. Joanne Fox, managing editor of The Catholic Globe, newspaper of the Diocese of Sioux City, contributed to this story.

PREVIOUS: Tobin: Being with those in need, distress communicates Christian message