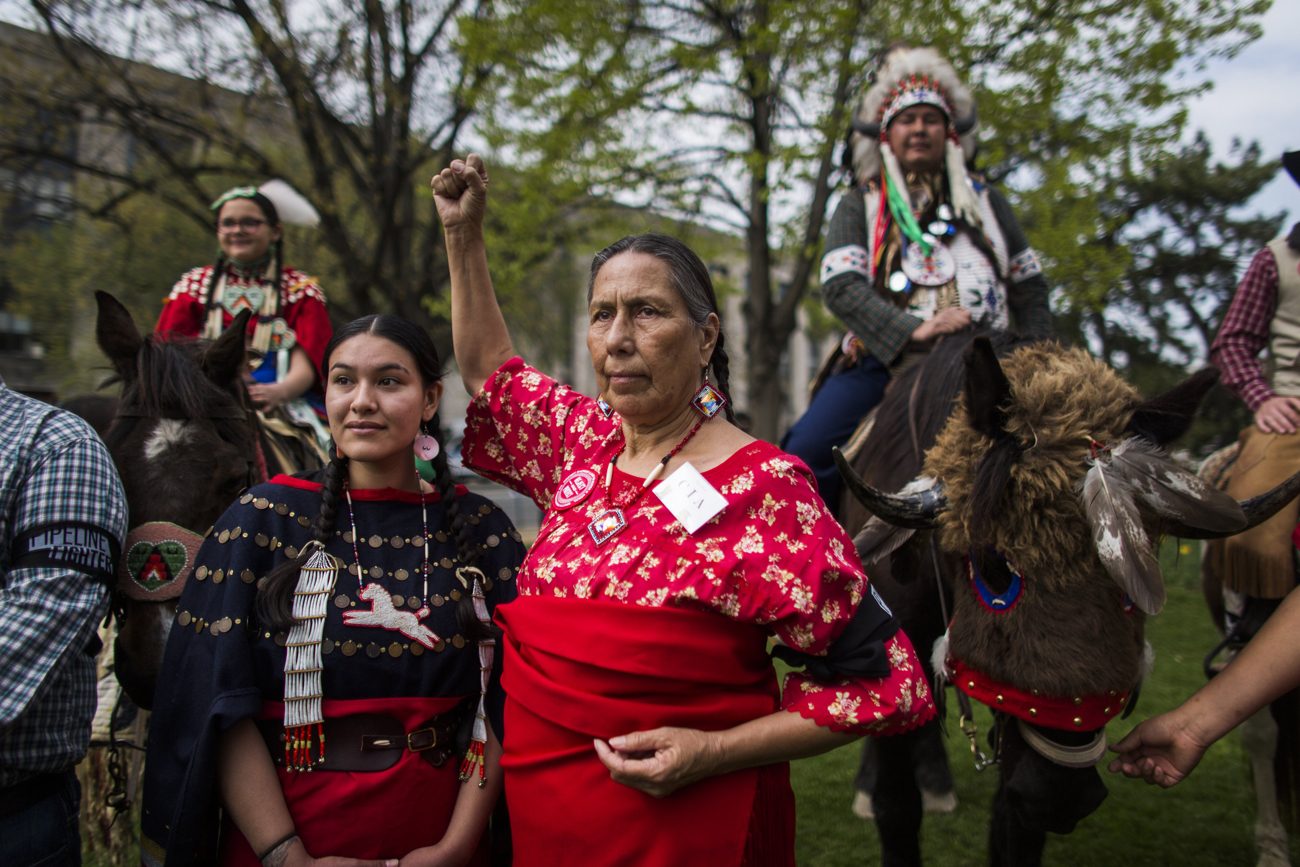 Samantha Jones of the Sicangu Lakota band of the Rosebud Sioux, left, and Casey Camp of the Ponca Nation are seen in Washington in this 2014 file photo. The Jesuits are returning more than 500 acres in South Dakota to the Rosebud Sioux. (CNS photo/Jim Lo Scalzo, EPA)

ST. FRANCIS, S.D. (CNS) — The Jesuits are returning more than 500 acres in South Dakota to the Rosebud Sioux. The formal return of the property is expected to be complete sometime in May.

The property had been given by the U.S. government to the Jesuits in the 1880s for use for churches and cemeteries, according to remarks in a YouTube video by Jesuit Father John Hatcher, president of St. Francis Mission.

“At the beginning of the mission, we had 23 mission stations,” Father Hatcher said. “But over the years as the people moved off the prairie and into cluster housing, those churches were closed because they were considered unnecessary.” Other properties never had churches built.

“It’s now time to give back to the tribe all of those pieces of land that were given to the church for church purposes,” Father Hatcher added. “We will never again put churches on those little parcels of land. But it’s an opportunity to return land that rightly belongs to the Lakota people,” of which the Rosebud Sioux are a part.

The property, totaling about 525 acres, is dotted throughout 900,000 acres on a Rosebud reservation in the south-central portion of the state, bordering both the state of Nebraska and the Missouri River.

Rodney Bordeaux, chief operating officer of St. Francis Mission, said that when he started work there five years ago, the land transfer, having been initiated by Father Hatcher, was “stalled.” He attributed it to finding the right office within the federal Bureau of Indian Affairs to follow through.

“It was just a matter of someone doing it,” Bordeaux told Catholic News Service during a May 4 telephone interview. “We did it on our end, but finding the right office to carry it out — it’s just a cumbersome process.”

With the land back in the Rosebud Sioux’s hands, “it might just be used for agricultural purposes like it is now, for grazing. It might be used for community development. It might continue to be used for religious purposes,” said Harold Compton, deputy executive director of Tribal Land Enterprises, the Rosebud Sioux’s land management corporation. “It’s because they’re so scattered, I think each one will eventually evolve due to their own location.”

There are about 25,000 people enrolled with the Rosebud Sioux, 15,000 of whom live on the reservation.

Compton told CNS, “It’s the symbolism of returning. This land was categorically reserved by the government for the church’s use. So, the church returning this to the tribe is a plus for everybody.” He added, “The symbolism far outweighs” but then caught himself. “Land is valuable. Land everywhere is valuable. Land around here is worth $1,000, $2,000 or more an acre.”

NEXT: USCCB communications restructuring shifts focus from print to digital