Long-awaited executive order on religion has unclear path ahead 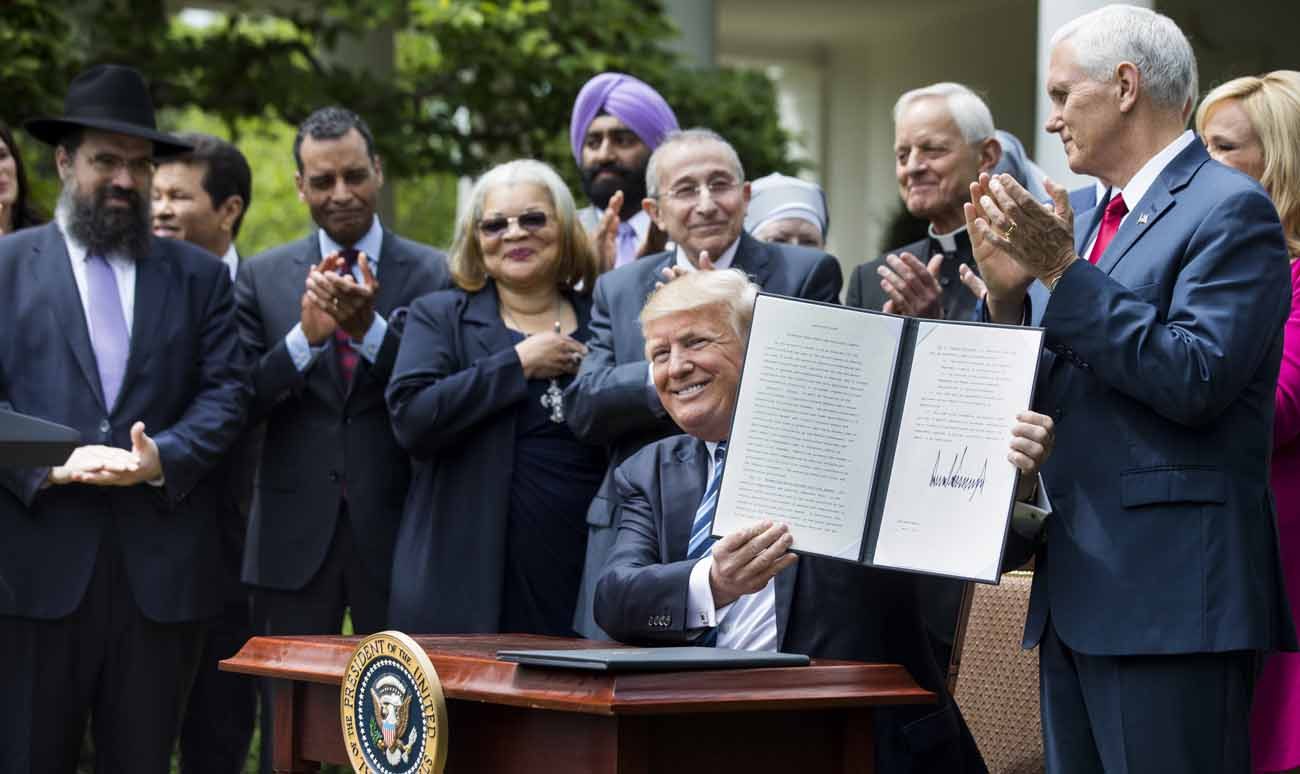 WASHINGTON (CNS) — At a White House Rose Garden ceremony May 4, President Donald Trump told a group of religious leaders: “It was looking like you’d never get here, but you got here, folks,” referring to their presence at the signing of the executive order on religious liberty.

And maybe some in the group wondered where “here” was since they hadn’t even seen the two-page executive order they were gathered to congratulate and only knew the general idea of it from a White House memo issued the previous night with just three bullet points.

The order didn’t seem to part any seas to make an immediate path to religious freedom, especially since it places decisions for how this will play out in the hands of federal agencies and the attorney general.

Catholic leaders in general seemed to view it with cautious optimism, praising the order as a first step but not the final word.

Cardinal Daniel N. DiNardo of Galveston-Houston, president of the U.S. Conference of Catholic Bishops, who attended the White House ceremony also celebrating the National Day of Prayer, said immediately after the event that he had yet to see the entire executive order. He defined the principle of it: “There should not be an overly intrusive federal government” involved when people are exercising their religious freedom in the public square or institutions they run.

The two-page order, “Promoting Free Speech and Religious Liberty,” was posted on the White House website hours after it was signed. It is half the length of a leaked draft version of this order published Feb. 1 in The Nation magazine. The order signed by the president is short on specifics and far less detailed than the leaked draft.

It devotes the most space to a promised easing of the Johnson Amendment — a 1954 law that bans churches and nonprofit organizations with tax-exempt status from taking part in partisan political activity. Although it would take an act of Congress to do away with this regulation, Trump can direct the Internal Revenue Service not to enforce it.

Many people likely aren’t familiar with the amendment by name, or they weren’t before this executive order, but they support the idea of it, according to a May 4 poll by the Public Religion Research Institute.

The poll shows 71 percent of Americans favor the law, as do most all major U.S. religious groups Only about one-third of white evangelical Protestants favor allowing churches to endorse candidates, compared to 56 percent who oppose it. Also, just 23 percent of white mainline Protestants, 25 percent of Catholics and 19 percent of black Protestants support churches endorsing political candidates.

In an interview with Catholic News Service at Reagan National Airport May 4 on his way back to his diocese for a confirmation Mass, Cardinal DiNardo said the amendment was likely more important to evangelical Christians than Catholics because, as he pointed out, the Catholic Church “has the tradition of ‘Faithful Citizenship,'” which he said puts the Johnson Amendment in a bigger context.

“Forming Consciences for Faithful Citizenship,” the U.S. bishops’ quadrennial document on political responsibility, guides voters not according to the stances of specific political candidates but Catholic social teaching.

Richard Garnett, professor of law at the University of Notre Dame, said in an email to Catholic News Service that the order’s emphasis on weakening the Johnson Amendment did not seem particularly significant, noting: “it is already the case that the relevant agencies and officials are highly deferential — as they should be — to churches and religious leaders, especially when it comes to what’s said in the context of sermons and homilies.”

Commenting on another major point of the executive order — relief to employers with religious objections to include contraception coverage in their employees’ health care plans — Garnett called it “a good thing — and long overdue,” but he also noted that “such regulatory relief was already probably on its way, as a result of the Supreme Court’s decisions.”

In a statement after the order was signed, Health and Human Services Secretary Tom Price promised to take action “in short order” to “safeguard the deeply held religious beliefs of Americans who provide health insurance to their employees.” The promise didn’t give any specifics.

The lack of details in the order even caused the American Civil Liberties Union, which had been poised to sue, to change its course. In a statement issued hours after the order’s signing, ACLU director Anthony Romero said the order had “no discernible policy outcome.”

“After careful review of the order’s text, we have determined that the order does not meaningfully alter the ability of religious institutions or individuals to intervene in the political process,” he said.

But the group also stands ready to sue the Trump administration if the order generates any official government action. Religious groups, for opposite reasons, likewise stand ready to see if the order has any teeth.

As Knights of Columbus Supreme Knight Carl Anderson said in a statement: “This order marks an important step in restoring those constitutional principles guaranteed to every American,” with the added caveat, “There is still work to be done.”

PREVIOUS: Vermont priest’s 160-square-foot house has all the comforts of home