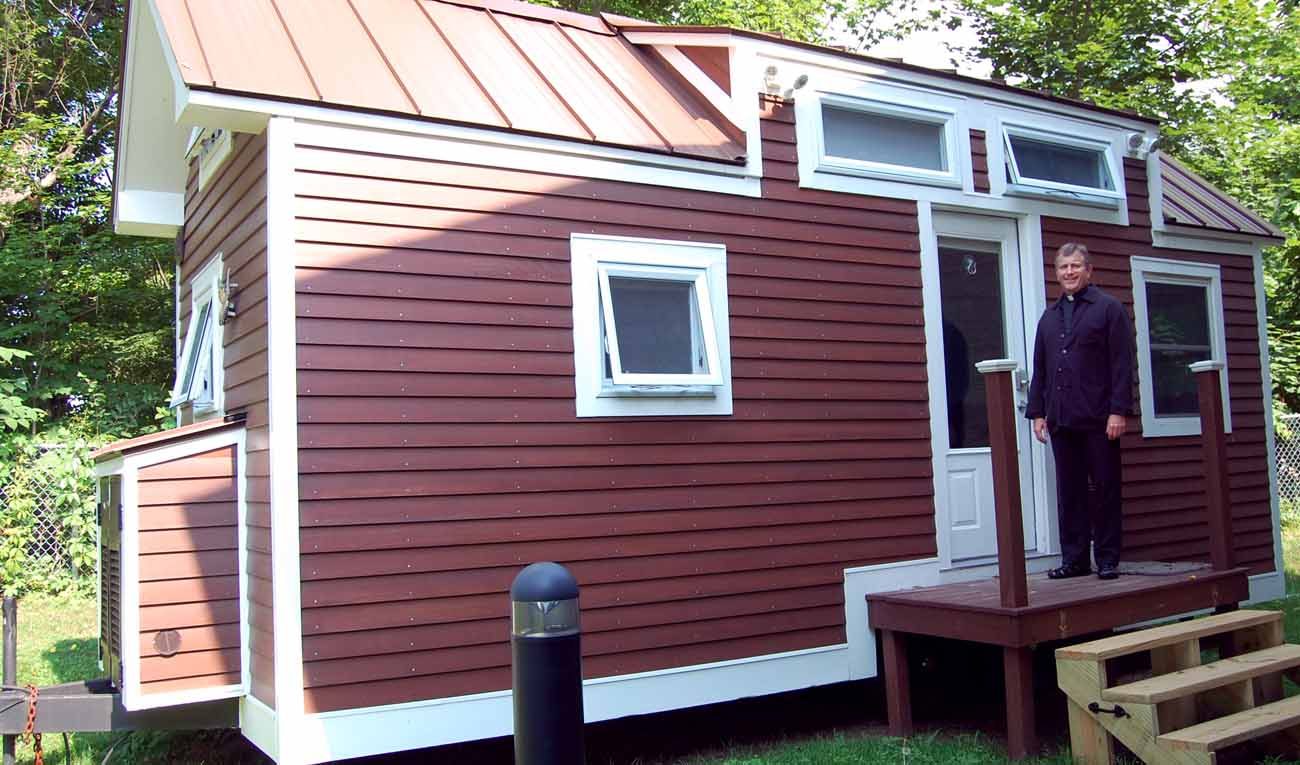 Father Peter Y. Williams, pastor of Maternity of the Blessed Virgin Mary Parish in Springfield, Vt., stands outside the tiny house he built. The brown cedar-sided house with standing-seam metal roof has about 160 square feet of floor space plus lofts for sleeping and storage. (CNS photo/Cori Fugere Urban, Vermont Catholic)

SPRINGFIELD, Vt. (CNS) — Father Peter Williams built himself a house that has all the comforts of home: a full kitchen, a bathroom with a flushable toilet and shower, a dining area, a living area with a drop-down television, a propane furnace and even electric radiant heat under the laminate wood flooring.

It’s all part of his towable, tiny house.

The brown cedar-sided structure with brown standing-seam metal roof has about 160 square feet of floor space plus lofts for sleeping and storage.

Father Williams, pastor of Maternity of the Blessed Virgin Mary Parish in Springfield, in southeastern Vermont, lives in its 5,000-square-foot rectory, and though he’s not complaining, he quipped, “If you want to know my preference, go look at the tiny house.”

Using plans he bought for the exterior of an 18-foot house and modified for 21 feet, he began the building project behind the church four years ago and finished it two years later.

Materials alone cost about $30,000, and he did most of the work himself.

Though he had basic knowledge of tools, he had never built anything, but thought he could — and should — build himself a tiny house.

When a friend first introduced him to the concept of tiny houses about six years ago, Father Williams admits he thought it was “crazy.” But he realized it would be perfect for a priest who can be assigned anywhere in the statewide diocese; instead of selling a personal home to move to another assignment, he could just move the tiny house with him. 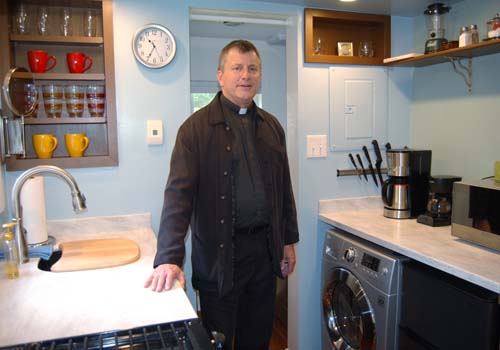 Also, the tiny house could be just right for retirement.

Father Williams, 56, had a liver transplant in 2012 and realized then that he does not need much in terms of a house. In fact, he can picture himself living in the tiny house when he retires, on five to 10 private acres somewhere in Vermont.

He is the sixth of 15 children; his family is originally from the Chicago area and moved to Vermont from Connecticut. A graduate of Christendom College in Front Royal, Virginia, he was ordained a priest of the Diocese of Burlington in 1987.

While building the house, Father Williams had many “untypical” visitors who stopped not only to see what he was doing but to talk about everything from faith and heaven and hell to their personal lives. The project was a way for him to be available to people in an informal way outside of office hours.

The tiny house — with its interior painted in light green and light blue with birch tree decals on one wall — is now on a parishioner’s property in Springfield, and the priest goes there from time to time on days off.

“I’d love to use it more, but it doesn’t fit into my life right now as much as I thought it would,” he said.

Last summer, he built a camper on a trailer he can pull with his pickup truck. “You need a really big truck to pull the tiny house,” which weighs about 12,000 pounds, he said.

Having practical skills “grounds you,” he added. “There is a lot of peace from working with your hands. You realize the value of labor.”

He enjoys watching television programs about tiny houses and especially likes the clever ideas for ladders to lofts and for storage.

When Father Williams built his house, his focus was not on using less energy, but he likes that he spends only about $100 a year on energy costs for it, with its limited use. “It’s practical wisdom that if you don’t need to use a lot, don’t,” he said. “There is something about that that is very attractive to me.”

Urban is content editor/staff reporter for Vermont Catholic magazine, publication of the Diocese of Burlington.

NEXT: Long-awaited executive order on religion has unclear path ahead