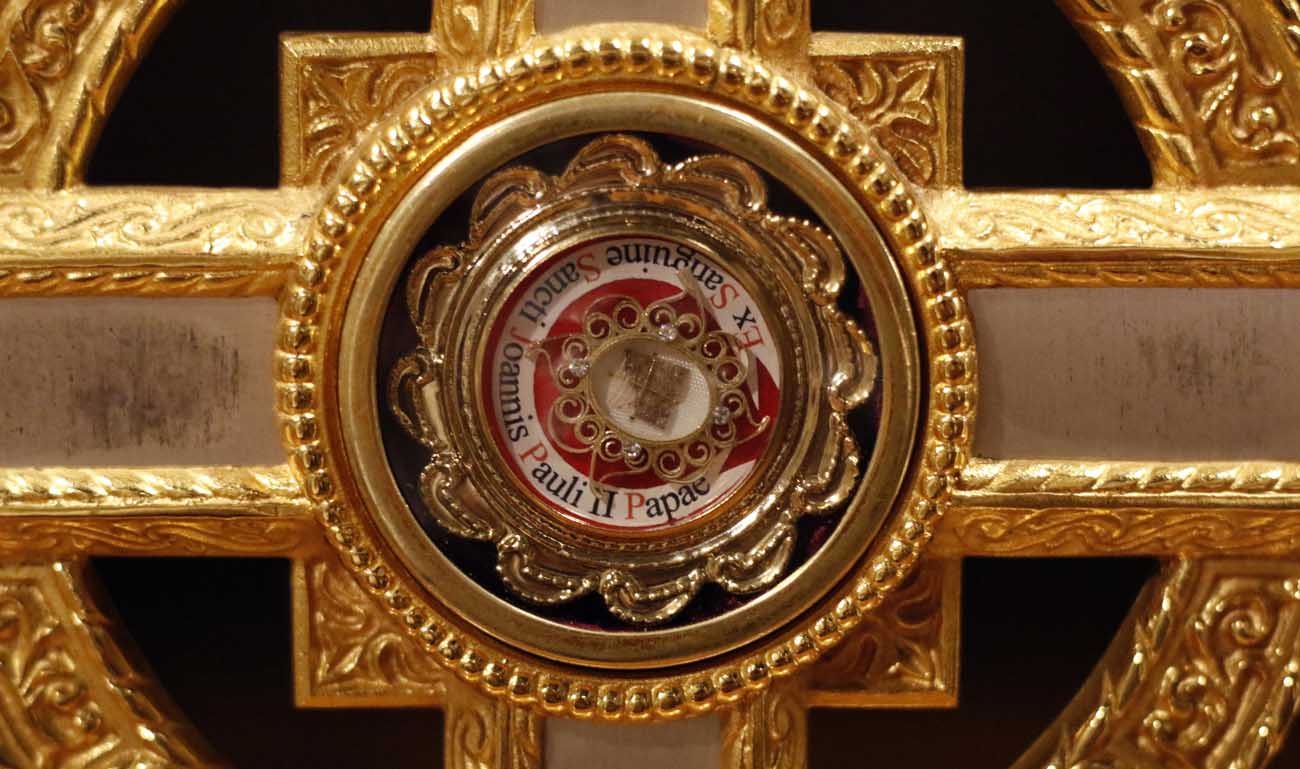 A reliquary containing a blood-stained piece of the sash worn by St. John Paul II during the 1981 attempt on his life is seen at St. Vincent Ferrer Church in New York City May 13. (CNS photo/Gregory A. Shemitz)

NEW YORK (CNS) — On the 100th anniversary of the first Marian apparition at Fatima, a shrine was dedicated in New York May 13 to the memory of St. John Paul II, who credited Mary with saving his life after an assassination attempt in Rome on the feast of Our Lady of Fatima in 1981.

The shrine is at St. Vincent Ferrer Church, whose pastoral care is entrusted by the Archdiocese of New York to the Dominican order.

Dominican Father Thomas More Garrett told Catholic News Service that the idea for the shrine came from the serendipitous offer of a swatch of the blood-stained sash St. John Paul wore the day he was struck by four bullets in St. Peter’s Square May 13, 1981.

“Msgr. Slawomir Oder, the postulator of the pope’s canonization cause, said he’d be willing to part with a small piece of the cloth if we could find a fitting place for the relic to be venerated,” Father Garrett said.

Mary appeared to three shepherd children at Fatima, Portugal, in 1917. She first appeared May 13, and the apparitions continued once a month until Oct. 13.

When Mary appeared, she identified herself as Our Lady of the Rosary and instructed them to pray the rosary every day to bring peace to the world. The Dominicans have promoted devotion to the rosary since the 15th century and the late Dominican Father Thomas McGlynn consulted with Fatima visionary Sister Lucia dos Santos in 1947 while he sculpted a statue of Mary that is on display at St. Vincent Ferrer.

Father Garrett is associate director of the St. John Paul II Society that was established in early 2017 in anticipation of receiving the relic and creating the shrine. 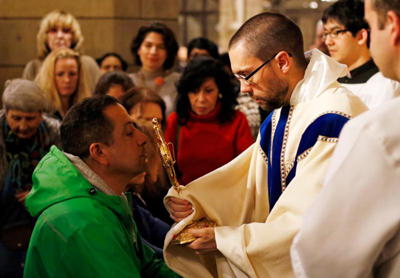 Dominican Father Thomas More Garrett holds a reliquary containing a first-class relic of St. John Paul II as a man venerates it following a May 13 Mass marking the dedication of a shrine to St. John Paul at St. Vincent Ferrer Church in New York City. (CNS photo/Gregory A. Shemitz)

More than 200 people slogged through drenching rain to reach the church on Manhattan’s Upper East Side. Inside the Gothic Revival church, they recited the rosary and participated in the Mass of dedication for the shrine. The cloth, enclosed in a simple gold reliquary, sat on a table in front of the altar while Father Garrett celebrated the sung Mass.

Father McGlynn was commissioned by a distributor of religious goods to make the statue shortly after the Second World War, when devotion to Our Lady of Fatima began to spread beyond Portugal. Although he was confident his representation of Mary was accurate, based on his research, he determined to show a small model of it to Sister Lucia, the only surviving seer, for confirmation.

Carrying a letter of introduction from Cardinal Francis Spellman of New York to the bishop of Lisbon, Portugal, he got permission to visit Sister Lucia at her convent. When he finally met Sister Lucia, Father McGlynn was surprised and disappointed when she politely told him his statue was inaccurate.

He remained at the convent and under Sister Lucia’s direction, produced an entirely new statue. In his memoir, Father McGlynn said Sister Lucia corrected his ideas of the appearance of Our Lady of Fatima and also explained to him the spiritual vision of Fatima and encouraged him to make it better known.

The sculptor came home for the dedication at St. Vincent Ferrer of the redesigned statue on Mother’s Day, 1947. By cruel coincidence, his mother, who planned to attend the event, died while he was en route home, and lay in a funeral parlor across from the church as he preached at the dedication. Father Devaney said from that day, Father McGlynn looked at Mary as his mother, in much the way St. John Paul did.

On the first anniversary of his attempted assassination, St. John Paul visited the Shrine of Our Lady of Fatima in Portugal to thank Mary for saving his life. Throughout his papacy, he repeatedly recognized her intervention and urged people to listen to her message and pray for peace.

The shrine now consists of Father McGlynn’s statue above a bank of seasonal flowers, with a portrait of the young Pope John Paul on an easel. Father Garrett said the shrine area will be expanded to include a secure spot for the permanent display of the relic and two diptychs flanking the statue.

The commissioned art will depict Mary, and St. John Paul, as well as Sts. Maximilian Kolbe and Edith Stein whose lives were connected to the struggle against totalitarianism that was central to the message of Fatima and the pontificate of St. John Paul, Father Garrett said.

The St. John Paul II Society will mark the Oct. 13 centenary of the last of the six apparitions at Fatima with a Mass concelebrated by Msgr. Oder.

NEXT: San Francisco Catholics give thanks for the life of Archbishop Niederauer