San Francisco Catholics give thanks for the life of Archbishop Niederauer 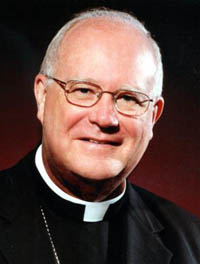 SAN FRANCISCO (CNS) — Archbishop George H. Niederauer was remembered for his wit and his gifts as a teacher and spiritual director for two generations of priests during the funeral Mass for the retired leader of the Archdiocese of San Francisco.

Delivering the homily at the Mass for his lifelong friend at St. Mary’s Cathedral May 12, Cardinal William J. Levada said Archbishop Niederauer lived his final days with “serenity in the face of death.”

“We thank you, and we thank God for you,” Cardinal Levada said of the man who succeeded him as archbishop of San Francisco.

The cardinal quoted from Paul’s letter to the Romans, which Archbishop Niederauer chose as the second reading for the Mass: “Whether we live or die, we are the Lord’s.”

The Mass followed a May 11 vigil at Mission Dolores Basilica. Homilist Bishop Robert W. McElroy of San Diego remembered Archbishop Niederauer for forging “unity and love” as leader of the eucharistic communities of San Francisco and Salt Lake City, where he was bishop for 11 years, before his appointment as archbishop.

Archbishop Niederauer was a “great man of faith and service” who taught two generations of priests and seminarians, Bishop McElroy said.

Bishop McElroy, a former auxiliary bishop of San Francisco, said Archbishop Niederauer “truly embraced the image of the church as pilgrim people of God, struggling in this world to live by the Gospel in often excruciatingly difficult situations and marching together unsure where God was leading, but committed nonetheless to ennobling our world while acknowledging our failings.”

Archbishop Niederauer, 80, died of interstitial lung disease just two days after celebrating Mass in his bed at Nazareth House in San Rafael, marking the 55th anniversary of his ordination as a priest, Cardinal Levada said.

Cardinal Levada said Archbishop Niederauer, who served from 2006 to 2012 as the eighth archbishop of San Francisco, was prepared for death although he experienced moments of anxiety after moving in January to hospice care at Nazareth House from his residence on the grounds of St. Patrick’s Seminary & University in Menlo Park.

“Once he asked me, “Have the doctors told you how long this will take?'” Cardinal Levada said. “I had to say, they didn’t seem to know exactly.”

“He put up with the uncertainty, since he knew sooner or later it was the Lord who was calling him,” Cardinal Levada said.

In reviewing the life of his friend, Cardinal Levada said Archbishop Niederauer picked up his wit and “gift of gab” from his family and remained sharp until the end.

“In these last years we would occasionally joke about how we had to dredge our memories for the names of people and places that didn’t come up on our mental screens till five or 10 minutes too late,” Cardinal Levada said. “But his storehouse of witty sayings never seemed to abandon him. When we celebrated our 80th birthdays last year — he was older by one day — I thought to remind him of the adage ‘age before beauty.’ I quickly realized my mistake. He quipped back immediately — with a fake smile — the Gertrude Stein line, ‘pearls before swine.’ I can assure you that I knew I had been put in my place.”

Archbishop Niederauer and Cardinal Levada became friends at St. Anthony High School in Long Beach and attended the seminary together.

Ordained in 1962, Archbishop Niederauer was an English professor at St. John’s Seminary College in Camarillo for half his priesthood, helping prepare future priests of the Los Angeles Archdiocese.

He continued his work at the seminary for many years as spiritual director and finally for five years as rector. “Thus he was a spiritual director for a generation and more of future priests during their seminary formation,” and for many other priests when he became co-director of the Cardinal Timothy Manning House of Prayer for Priests in Los Angeles, Cardinal Levada said.

This story appeared in on the website of Catholic San Francisco, newspaper of the Archdiocese of San Francisco.

NEXT: After furor over remarks, DNC chair to meet with pro-life Dems’ head