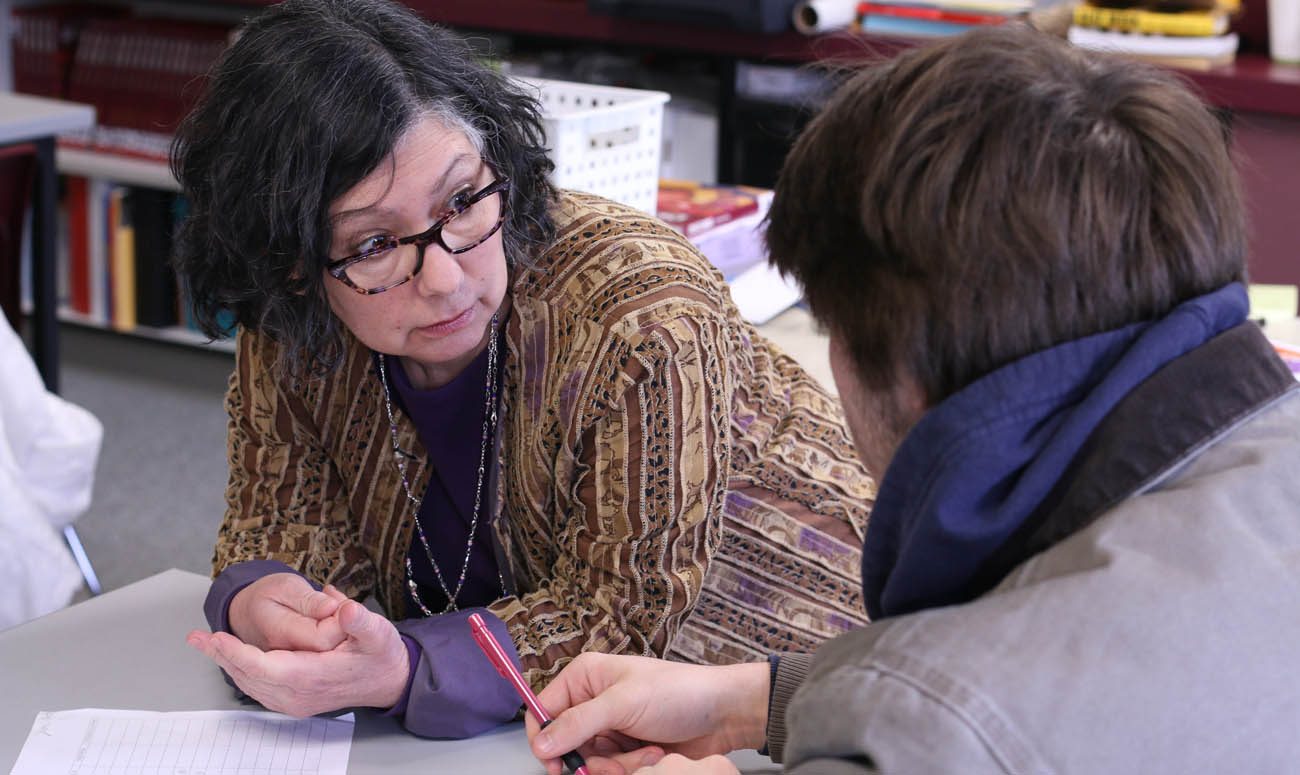 PORTLAND, Ore. (CNS) — Claudia Raffaele knows the fear of being stopped at gunpoint in Argentina, the bone-tiredness that comes after a nine-hour shift at a Los Angeles factory, and the worry and emotional weight of caring for three children as a single mother.

Yet at Jesuit High School in Portland, on a recent afternoon, Raffaele’s past bubbled up the same ways it does every day: in her passion for teaching and an unquenchable desire to learn.

“Claudia has the foundation of any good teacher in that she loves her students, she’s patient and organized,” said Paul Hogan, the school’s principal. “But what’s most striking is that she’s constantly growing and hungry to improve herself.

“And you don’t have a lot of people here who fled a military dictatorship,” he added. “I’m inspired daily, thinking where she came from.”

Sit in Raffaele’s Spanish class for a few minutes and you’ll see a woman of small stature in constant motion — she’s introducing a new verb one moment, the next she’s weaving between desks answering students’ questions.

Raffaele, 59, smiles often in her classroom, and that’s not surprising: She’s living her hard-wrought dream.

Raffaele’s parents grew up poor and worked hard to give Raffaele and her sister a Catholic education in her native Argentina.

Feisty and driven even as a child, Raffaele can’t remember a time when she didn’t want to teach. While some young girls played house, she played school. “I knew the names of all my students, took roll and gave the imaginary students grades,” she recalled.

Her early memories include the harsh teasing she received for being short; she stands about 4 feet, 10 inches. But as with many of her challenges, Raffaele discerns their value. “That teasing gave me strength, so I’m grateful for it,” she said.

Most of Raffaele’s childhood was stable, but her country was not. In 1955, two years before she was born, Juan Peron, husband to the legendary Maria Eva Duarte de Peron, was exiled following a military coup. Argentina then entered a long period of military dictatorships with brief intervals of constitutional government.

As Raffaele grew into young adulthood, the political instability escalated. From 1976 to 1983, the country that gave the world Pope Francis was embroiled in a campaign known as the “dirty war.” Waged by the military against suspected left-wing political opponents, the violence left an estimated 10,000 to 30,000 people missing or dead.

With the campaign as a backdrop, Raffaele studied to be a teacher at a Buenos Aires university. As a student, however, “you were a target,” Raffaele said. She had a gun pointed at her several times and was told to drop to the ground.

In 1982 when Raffaele was given the opportunity to come to the United States, she took it. Then 25, Raffaele arrived with courage, a visa and not much else. “I knew no English,” she said. But she didn’t take a hiatus from her mission to learn. “I got to California on a Saturday, and on Monday I was attending (language) classes at night.”

Raffaele came to the country with her then-husband; the couple divorced many years ago.

Eventually finding a job in a downtown Los Angeles factory, which she called a sweatshop, Raffaele earned menial pay and worked long hours. She took three buses to arrive at her shift. All day she snipped threads and flipped shirts inside and out. Most workers were undocumented, and after overstaying her visa, Raffaele was too.

Having her first son, Eddie, was a defining moment. “I thought, ‘He’s the only documented person in my life, and I’m going to learn this language for him.'”

Raffaele dedicated herself to her studies with even greater zeal. After working all day at the factory, she came home, made dinner for her son and then headed to school before returning in time to put Eddie to bed. A few years later, her son was joined by a daughter, Karolyn.

There were times she thought about returning to Argentina. “But one night as I put my little guy in the crib, I realized, ‘I cannot do that to my kids. They are Americans. We are in this together.’

Raffaele scrimped together enough money to send her children to a Catholic school, but the factory work was unpredictable, with frequent firings when contracts were scarce. After one firing, she didn’t see how she could keep her children enrolled. The parish, however, was looking for a Spanish translator to serve parishioners and, because of her improving English, she was offered the job.

“I truly believe no one can succeed without a helping hand, a hand that when you are in a … dark place reaches down and pulls you up into the light,” Raffaele said. “I have many people to thank for all I have received and continue to receive.”

Over the years, she has done her best to pay it forward.

Moving to Portland in 1994, Raffaele had another son, Jean-Luc, and slowly built up her teaching background. Her grit and hard work opened doors, as did the helping hands of Jesuit administrators. Eddie longed to attend Jesuit High School, but the tuition didn’t fit into Raffaele’s single-parent budget. Jesuit administrators not only found a way to enroll Eddie, but they also gave Raffaele a summer teaching job, which led to a full-time position.

Determined to send all three children to Jesuit, Raffaele often juggled three jobs, working for a time as a translator and at a grocery store on weekends.

Hogan called the Spanish teacher “a cornerstone of our faculty,” and she has spent 17 years at the school. When she’s not at the front of a class, she’s a student at the University of Portland, working toward a doctorate in education.

If her past has given her tenacity and teaching is her vocation, Raffaele’s impetus and inspiration are her children.

Her children are proud of their mother, the woman who dreamed of becoming a teacher as a little girl in Argentina and then made that a reality despite countless hurdles.

“She came to this country with no English and pretty much started from scratch,” Eddie said. “It’s awesome to see where she is now.”

Karolyn added that her mother is quiet about much of her past, but “her actions speak for themselves.”

“She’s been strong in a way a lot of people don’t have to be in their lifetime,” she said. “My mom continues to teach me every day.”

Scott is a reporter for the Catholic Sentinel, newspaper of the Archdiocese of Portland.

NEXT: Mary’s message of hope to be celebrated in small Wisconsin town