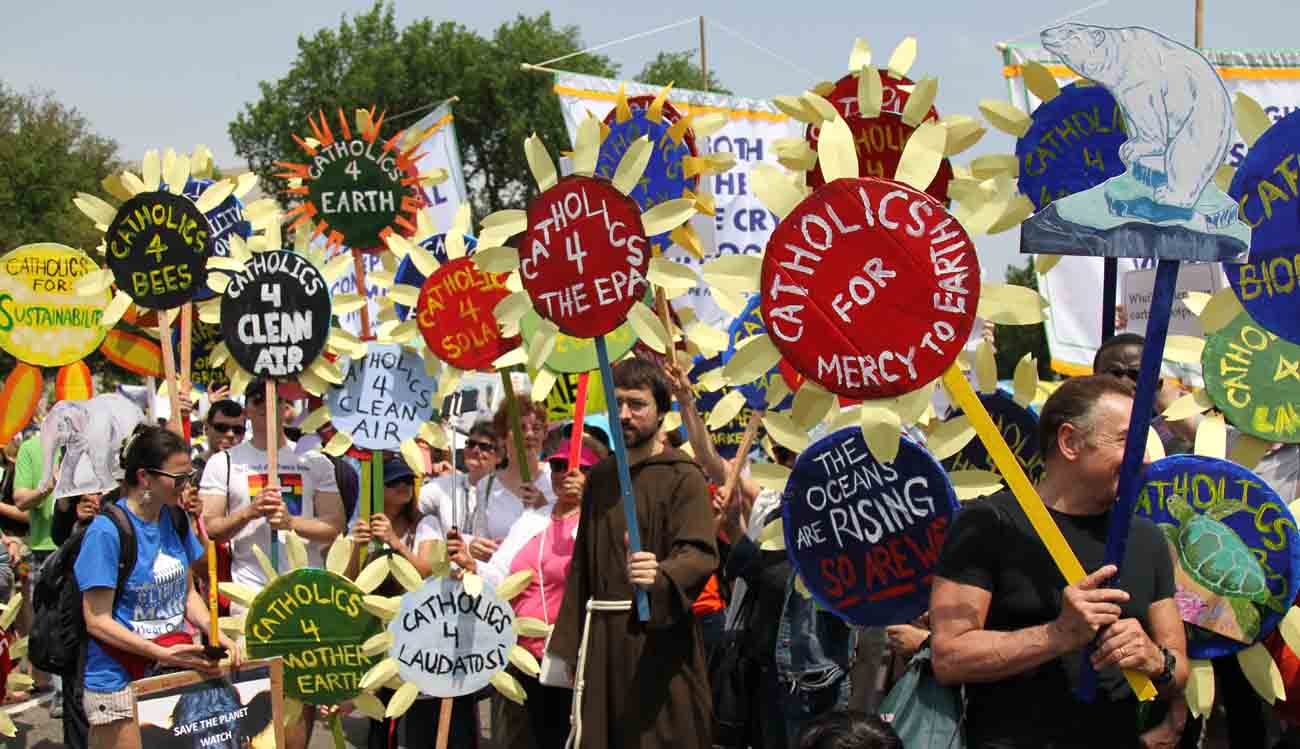 On a sweltering day that reinforced the message about the need to respond to climate change — the 91-degree temperature at 3 p.m. April 29 tied a 43-year-old Washington record for the date — many in the Catholic contingent said they felt they had a moral obligation to witness in the streets.

“We march for our grandchildren. Stop global warming,” read one sign propped up in the back of St. Dominic Church in Washington, where about 300 people gathered before the march for Mass celebrated by Dominican Father Hyacinth Marie Cordell, the parish’s parochial vicar.

“The Vatican is solar. What about US?” read another. “We resist, we build, we rise,” read a sign from St. Francis and Therese Catholic Worker Community in Worcester, Massachusetts.

Underlying the messages on the signs and banners were people who shared a heartfelt concern to carry out Pope Francis’ call in his 2015 encyclical to live responsibly with the planet, remember the needs of others around the world and to reduce consumption and energy usage for the sake of God’s creation.

They also wanted to send a message to President Donald Trump that his policies on the environment and energy development do not follow the pontiff’s call to protect Earth.

For Manny and Mary Hotchkiss, the march was their second in two weeks. Both scientists, the couple from Portland, Oregon, joined a regional March for Science in New Orleans April 22 as they made their way on a cross-country trip to a meeting of Maryknoll affiliates in Ossining, New York. 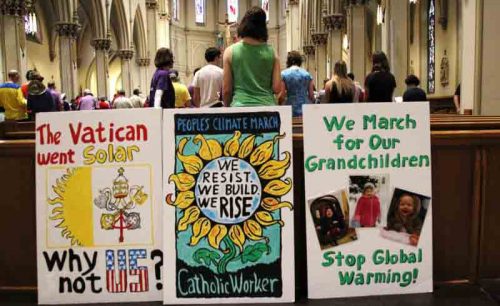 Faithful gather at St. Dominic Church in Washington prior to the start of the People’s Climate March April 29. (CNS photo/Dennis Sadowski)

After the Mass, Mary Hotchkiss, 72, a chemist, said the couple’s involvement was required by their Catholic faith. Manny Hotchkiss, 74, a mechanical engineer, expressed dismay about the president’s policies.

“The most important thing I see with this political scene, and it brings a tear to my eye to think about it, is that everything I tried to teach our kids growing up (about science) is fully rejected by the current administration,” he said.

The 300 people at the Mass heard Father Cordell call for an “ecological conversion” during his homily. He said each person must act in any way possible to protect God’s creation: reducing energy usage; limiting waste; choosing carpooling or biking and walking more; and buying less.

“We can learn increasingly to act not only with our own good and convenience in mind, but above all to think and choose according to what is best for all, especially for the poor and for future generations,” the Dominican said. “This ecological conversion calls us to self-examination, to make an inventory of our lives and habits so that we can learn to be better stewards of our common home and its resources, which are meant for the good of all.”

He said such steps require a revolution of the heart, as Pope Francis has called each person to undertake. He described it as a “change toward responsibility and virtue, a transition to thinking about the common good, future generations, the poor, other living beings, God’s glory and the environment in all of our decisions instead of thinking only in terms of a short-term, fleeting and superficial good or convenience for ourselves.”

Sister Kathy Sherman, a member of the Congregation of St. Joseph in LaGrange Park, Illinois, was pleased to hear Father Cordell stress the encyclical’s themes.

“I feel like I’m marching for the children, for the future,” she told Catholic News Service. “Earth is getting bad for us. If we don’t do something there’s not going to be anything like we’ve known for the future generations, and it breaks my heart.”

Other members of Sister Sherman’s congregation joined a satellite march in Chicago, but she made the trek to Washington on her own because she said she felt it was important to take a message directly to administration officials.

“I think it’s so essential that we connect climate degradation with economic and racial justice,” Sister Sherman added. “It’s just the whole sense of the oneness.”

A large banner mounted on a 12-foot bamboo pole carried by Malcolm Byrnes, 57, a member of St. Camillus Parish in Silver Spring, Maryland, was one of several that quoted the pope’s encyclical. It read: “We need to reject a magical conception of the market.”

“We have to bring things back into focus and see climate change as a human issue involving all of humanity, especially the poor,” Byrnes said as he waited for the Mass-goers to begin walking to the assembly point for faith communities near the U.S. Capitol.

Byrnes explained that Pope Francis’ words had inspired him to consider his own actions in response to the divisive language the president and members of his administration have used during the first 100 days in office.

“We have to be activist,” he said. “We have to continue to put the pressure on and to be active. Doing it as a Catholic is ever more poignant for me.”

March organizers said the event had been planned as a follow-up to the September 2014 People’s Climate March in New York City before Trump’s election in November. The April 29 march was led by indigenous people who already are facing disrupted lives as the climate warms and causes drought and rising ocean levels.

The march kicked off less than 48 hours after the Environmental Protection Agency began to revamp its website, taking down pages devoted to climate science. The agency said in a statement late April 28 that the information was “under review.”

Some of the Catholic marchers, a multicultural mix of young and old, families, and clergy, religious and laity, said they never had been involved in such a massive event, but that it was time to put their faith into action.

Rosio Ramirez, 58, a member of St. Jerome Church in New York City, said as she waited for the march to start that she decided to travel to Washington “for our rights.”

“This president does not believe in science, so I’m trying to raise my voice for my grandson, his future,” said the native of Mexico City.

Along the march route on Pennsylvania Avenue from the Capitol to the White House, Nancy Lorence, a member of St. Francis Xavier Parish in New York City, said personal actions are crucial if people of faith are going to make a difference. She carried a colorful cardboard sunflower on a short stick that read, “Catholics 4 the EPA,” one of 45 similar signs that she and others making the trip had made.

“We feel like ‘Laudato Si” calls us to be in the streets, as Pope Francis says, and be active on the social justice issues and climate change,” Lorence told CNS.

NEXT: Teacher who left Argentina during country’s ‘dirty war’ fulfills a dream