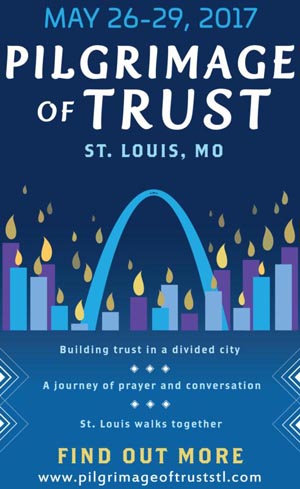 This is a poster for the Pilgrimage of Trust taking place in St. Louis May 26-29 to bridge racial divides after the 2014 riots in Ferguson. (CNS/courtesy Archdiocese of St Louis)

WASHINGTON (CNS) — Although it has been three years since the riots broke out in Ferguson, Missouri, many of the wounds have still not healed.

The racial divides — at front and center during protests of the fatal shooting of an unarmed black teenager by a white police officer — still linger.

As a way to move the city toward healing, St. Louis Archbishop Robert J. Carlson has called on outside help, inviting brothers from Taize, an ecumenical community in France, to come to St. Louis.

Many Catholics might be familiar with Taize because of its members’ songs, often based on the Psalms and known for their simplicity and repetition. The order’s charism is reconciliation.

The brothers accepted the archbishop’s invitation and a few have been in St. Louis for several months preparing for the May 26-29 Pilgrimage of Trust — days of prayer and workshops and a walk through the city May 28. Four brothers in all plan to attend the weekend’s events.

While the brothers’ monastery in the small village of Taize in central France is worlds away from tensions in middle America, these Catholic and Protestant brothers have devoted their lives to prayer and reconciliation — which speaks to the post-Ferguson environment. Their monastery has long been a site of Christian pilgrimage for young adults who come by the tens of thousands each summer to camp out on the grounds seeking to renew their faith.

For 40 years, the order has taken its ministry on the road as well, offering Pilgrimages of Trust in Johannesburg, South Africa, behind the Berlin Wall in Germany, and in Rwanda, Paris and London. Similar events have taken place in the U.S. at the Pine Ridge Reservation in South Dakota and inner-city Chicago.

The 2013 gathering at the Pine Ridge Indian Reservation is what prompted Archbishop Carlson, former bishop of Sioux Falls, South Dakota, to seek the brothers’ help in rebuilding relationships in St. Louis. A team from the archdiocese also is helping to coordinate the gathering, which is expected to draw more than 1,000 people.

The Pilgrimage of Trust in St. Louis is open to all ages, unlike the summer events at Taize that are primarily for young adults. The event also is not only for the scheduled weekend but is a continuation of meetings that started last fall. Organizers also hope more gatherings will take place after the brothers return home. Participants needed to register to attend the workshops by May 17, but no registration is required to take part in the walk.

Brother Emile, who is Catholic, has spent close to a year in St. Louis working with faith and community leaders. He has met with leaders of Christian, Jewish and Muslim groups and coordinated group sessions in Catholic and Protestant churches in and around the city listening to hurts and frustrations and praying with people to find a way forward when it can often seem overwhelming.

Part of his work has been to get people out of their comfort zones and into neighborhoods where they’ve never been to hear and see what it’s like for the residents and to pray with them.

The meetings have been a small-scale version of what the Pilgrimage of Trust is all about and what will be seen on the Walk of Trust May 28 with stops at different spots along the way to hear speakers. The walk, which will end with a gathering on the campus of St. Louis University, will take participants along Delmar Boulevard, a route that spans the city from east to west and is symbolic of the city’s divisions.

The street has been dubbed the “Delmar Divide” because it separates the rich from the poor, with mansions and wealthy neighborhoods just south of the street and poorer areas with boarded up buildings just to the north.

Pilgrimage of Trust events like the walk are meant as a step forward, said Brian Miller, executive director of the Catholic Youth Apostolate for the St. Louis Archdiocese. “You can’t move forward without taking that first step and you can’t take that first step without realizing the need,” he said.

Or put another way: Brother Emile said our culture so often wants to “fix things without gauging the pain” behind it. In a May 12 interview with Catholic News Service, he emphasized that the Pilgrimage of Trust is not about glossing over challenges but examining them, even if it causes some discomfort, and then moving forward in faith.

He said the meetings that have taken place so far in different churches, starting with one last September at Wellspring United Methodist Church in Ferguson, have shown that churches can provide safe places for people to speak out, but they also are brave places where conversation can happen and people can begin to work for change.

The 60-year-old brother, who grew up in Ontario, Canada, said Christians can find healing by thinking about the biblical passage that says the church is one body; if one suffers, all suffer.

That passage alone counters what he has heard in recent months about how so many people tend to “be in their own bubbles” unaware of others’ suffering.

He said that people are driven by fear when they isolate themselves, but they learn to trust each other as they build relationships.

Similarly, Miller told CNS May 16 that the Pilgrimage of Trust weekend reflects the idea of accompaniment, or walking with people, that Pope Francis often speaks about.

Miller has a long view of that challenge too, saying it won’t be done when the weekend’s events wrap up.

As he put it: “This is the beginning of the conversation, not the end.”